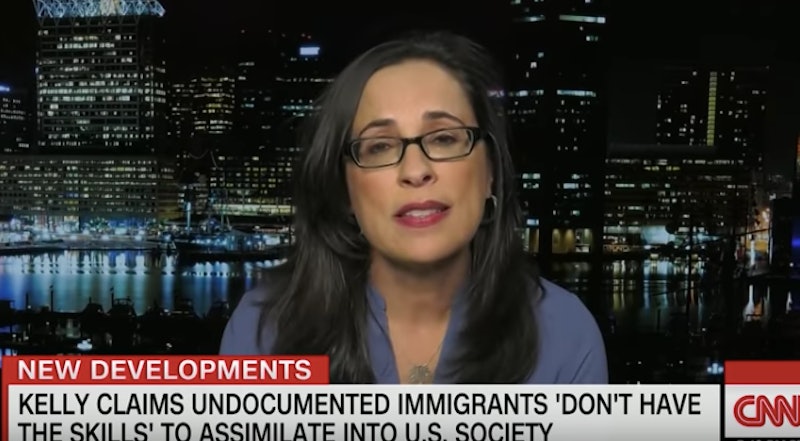 It's not every day that a genealogist makes waves in political circles. But Jennifer Mendelsohn, the founder of "Resistance Genealogy," has pulled it off.

"Resistance Genealogy" is a project in which Mendelsohn researches and reports on the ancestral roots of public figures who publicly denounce immigrants (spoiler: they all descended from immigrants themselves). Her work has effectively shone a spotlight on the hypocrisy that often clouds the immigration debate, but Mendelsohn says her goals stretch far beyond simply changing individual people's minds about immigration policy.

"I do think people with immigrant histories feel an incredible sense of pride, and an incredible sense of distress over how much immigrants are being denigrated, and demonized, and other-ized," Mendelsohn, a former reporter based in Baltimore, tells Bustle. "I think people are looking for a way to get beyond the stereotypes that are being put out in the media and get to the facts."

"Resistance Genealogy" began when Mendelsohn saw Iowa Rep. Steve King, a Republican who's been accused of having white nationalist beliefs, tweet that "we can't restore our civilization with somebody else's babies." Mendelsohn says it was "the most ridiculous thing I've ever heard."

Since then, Mendelsohn has reported on the immigrant roots of White House Chief of Staff John Kelly, Fox News host Tucker Carlson, and presidential advisor Stephen Miller — all staunch immigration hawks. Although she started "Resistance Geneology" in 2017, the project received a flood of newfound attention recently when she dug into the history of conservative pundit Tomi Lahren, a frequent critic of immigrants.

“You don’t just come into this country with low skills, low education, not understanding the language and come into our country because someone says it makes them feel nice,” Lahren had said on Fox News. “That’s not what this country is based on.”

This compelled Mendelsohn to dig into Lahren's own family tree — and she found that several of Lahren's own immigrant ancestors would've failed this test. Lahren's great-great-great grandmother lived in the United States over for four decades while only speaking German, according to Mendelsohn, while her second great-grandmother spent 10 years in the country without speaking a word of English. And though Lahren often denounces immigrants who break the law, her own great-great-grandfather was indicted by a federal grand jury for forging his naturalization papers, Mendelsohn found.

"For somebody who is constantly out there beating the drum about how illegal immigrants need to be deported, I found that pretty ironic," Mendelsohn says. She adds that Lahren's great-great grandfather was ultimately acquitted — "which is probably the reason why she's able to have the job she has today."

Mendelsohn stresses that her goal isn't to play "gotcha," or suggest that having immigrant ancestors is a bad thing.

Mendelsohn has received plenty of praise for her research; she says former Maryland Gov. Martin O'Malley told her that "your country needs you," a quote O'Malley confirmed to the Washington Post. But "Resistance Genealogy" has faced criticism as well, and not only from conservatives.

Some on the left have argued, for instance, that historical evidence will never convince hardline immigration hawks like Lahren to change their minds, and as such, that the project is doomed to fail.

But Mendelsohn acknowledges that much of her research "is probably preaching to the choir," and she doesn't claim to be trying to change conservative minds. What she does believe, she says, is that "Resistance Genealogy" has the potential to unite Americans in a deeply divisive time.

"It's something that so many Americans who are otherwise very, very dissimilar actually have in common, which is the scope and shape of their immigrant history," Mendelsohn tells Bustle. "I feel like we should be celebrating that history, and remembering it, and not trying to misrepresent it and lie about it."

Mendelsohn's research has so far focused on Republicans and conservatives, but she tells Bustle that she'll happily look into the family trees of anyone who denounces immigrants.