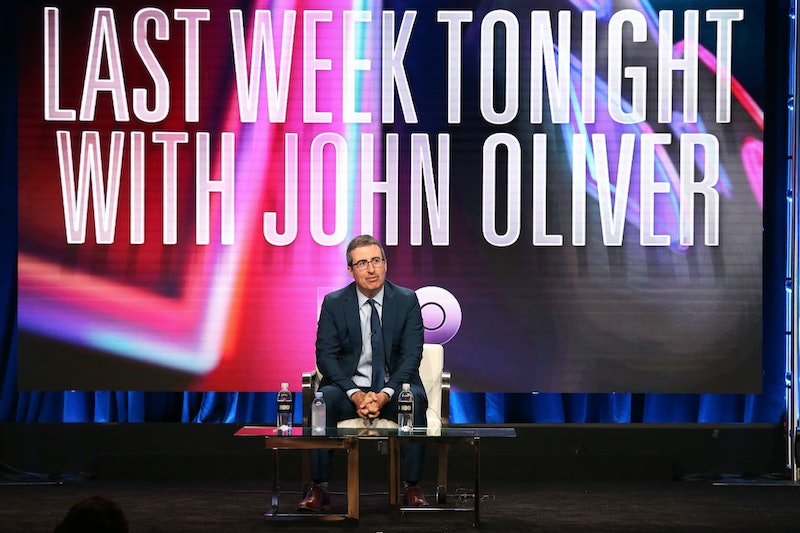 Last Week Tonight fans have to wait another week to tune in to the news comedy show, as no new episode aired on Sunday. If you're wondering why John Oliver takes breaks from Last Week Tonight, it might boil down to the amount of research that needs to be put into each show.

As NPR described during an interview with Oliver in February 2016, thorough fact-checking is absolutely essential for the show and constitutes the base of its comedic appeal. "You can't build jokes on sand," Oliver told the outlet. "You can't be wrong about something — otherwise that joke just disintegrates. ... You try to be as rigorous as you can in terms of fact-checking because your responsibility is to make sure that your joke is structurally sound." Indeed, a February 2018 New York Times article pointed out that, due to the amount of the research involved, it can take up to several weeks to prepare segments for an episode of Last Week Tonight. This could perhaps explain why the show takes occasional breaks, though Oliver has not specifically commented on why a new episode did not air on Sunday.

Notably, though, Oliver has indicated that, during longer hiatuses, like between the show's seasons, he and his staff work diligently to produce research for future episodes. For example, during the three-month break between Seasons 4 and 5, Oliver revealed what he and has team had been working on to the New York Times.

As the comedian described:

What we’re doing is researching stories, trying to make sure the structural foundations are solid, trying to bank research that we know we can stand on top of.

Oliver also told Variety in February 2017 that the weekly format of Last Week Tonight allows the show to take an in-depth look at issues that are perhaps not traditionally covered in late-night comedy. “As a benefit to us we’ve been pushed into covering things that no one in their right minds would cover for comedy,” the late-night host stated. He also added that working for HBO, which does not air commercials, allows for flexibility in the amount of information that can be included in the show's segments. "We can be structurally ambitious with what we do,” Oliver said.

Indeed, the comedian believes that the long-form, heavily-researched format of Last Week Tonight is what makes it so unique and appealing, even if its appeal is sometimes surprising to him. As Oliver told The Hollywood Reporter during a February 2015 interview:

You have to have a pretty intense level of contempt for the American people if you think people will only watch something if it's only two minutes long and you have someone getting smashed in the nuts at some point. And I'm not saying I don't enjoy two-minute-long, nut-smashing videos, but there has to be more. There has to be protein along with dessert. Although I was pretty surprised by the extent to which people have wanted to watch long pieces about things that seem objectively boring, like net neutrality, or objectively distressing, like the Iraqi and Afghan translators.

Overall, while Oliver has not directly commented on why Last Week Tonight did not air on Sunday, his previous commentary about the show's longer hiatuses perhaps lends some insight into the rationale behind the break. If you're missing your Last Week Tonight fix, you won't have to wait too long for another episode. The show will resume next week on Oct. 28.