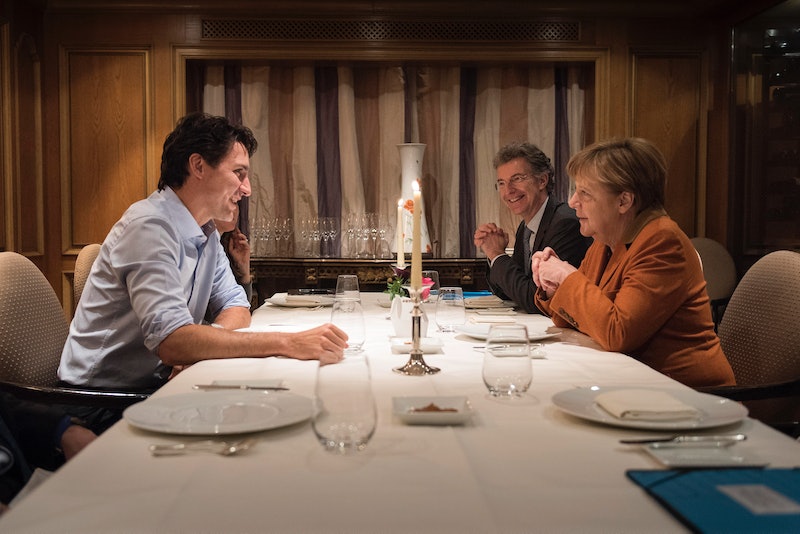 The New Yorker has called her "the most powerful woman in the world." Forbes has called her "the second most powerful person in the world." And yet, on Friday, German Chancellor Angela Merkel was painted by more than one media outlet as an infatuated girl caught making eyes at Canadian Prime Minister Justin Trudeau. While Merkel and Trudeau's "candlelit" dinner is hardly the first time the media has chosen to characterize a meeting between the Canadian prime minister and a powerful and influential woman as a tale of budding romance, jokes about the so-called "Trudeau effect" reek of sexism in more ways than one.

"Steely German leader Angela Merkel has THAT look in her eyes for Canada's handsome PM," reads a headline in the Daily Mail. "Candlelit dinner for two... first it was Ivanka Trump, now Angela Merkel is captivated by Justin Trudeau," reads one in the Telegraph.

In reality, Trudeau – fresh from visiting the White House, where a meeting with Ivanka Trump had also left the internet clamoring to define the president's daughter as "swooning" or "thirsty" – sat down to dinner in Berlin on Thursday with Merkel, Germany's foreign and security policy adviser Christoph Heusgen, and at least one other person a day before he and Merkel were set to speak about trade before the European Union Parliament. So, while the internet and some media outlets were concocting romantic fantasies, it's more than likely Trudeau and Merkel's dinner conversation revolved around more serious subjects.

But the sexism evident behind memes of Trudeau and Merkel's dinner goes beyond the implication a powerful female leader can't help but turn into a distracted, sighing and swooning mess when faced with a "handsome" man. (Although that implication is sexist and problematic enough.)

Under efforts to classify any woman who dares smile in Trudeau's direction as besotted with him also lies the message that women can't (or shouldn't) smile at a man or make eye with him without it meaning something sexual or romantic. Women are no strangers to having their facial expressions policed. Along with remembering to smile at men less we offend them by looking less than enthusiastically happy, now women need also to remember that such smiles can be used to cast us as love-struck in professional settings.

Such memes further serve to trivialize women's contributions in government, in the workplace, and in philanthropy by turning the focus away from their success or professionalism and on to invented feelings of lust or love. In essence, they imply women are controlled by their emotions, unable to think straight in the presence of a charismatic or good looking man.

Trudeau effect memes are also largely insulting to Canadian prime minister as he's repeatedly being cast not as a serious politician but as "man candy," the heartthrob of international politics, and in some corners of the internet, as "Prime Minister Steal Yo Girl." This is a world leader we're talking about, not Channing Tatum.

As much as we like to talk about how far we've come, memes like those inventing a Trudeau-Merkel romance or a Trudeau-Ivanka crush are proof that sexist stereotypes and hypersexualized ideas about male-female relationships still exist as cultural norms. But such ways of thinking should be called out as problematic, especially when used to form the punchline for cheap jokes, in an effort to push for an evolved way of thinking.