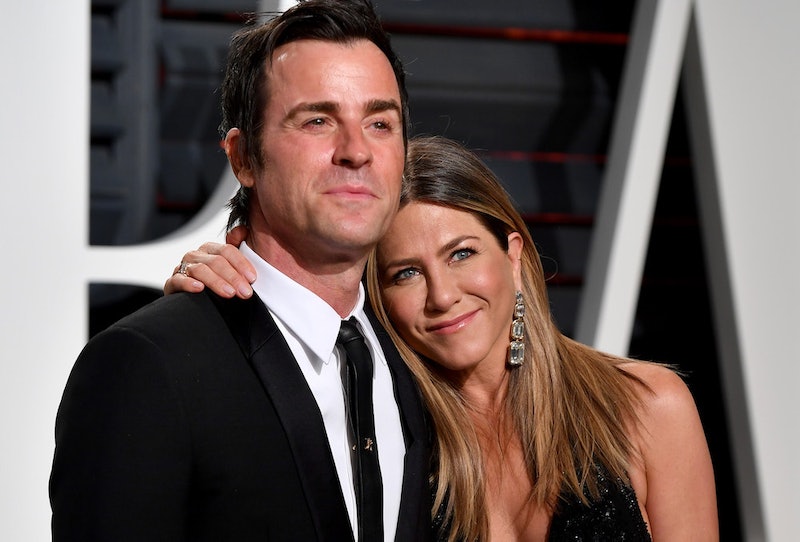 On Oct. 15, Aniston seemingly broke the internet when she officially joined Instagram. That glitch was the reason why Justin Theroux didn’t initially follow Jennifer Aniston on the social media platform. In an interview with Entertainment Tonight on Tuesday, Oct. 22, Theroux said his ex-wife noticed he didn't appear to follow her new IG account, even though he thought he did. “She actually texted me [and said], 'You haven't followed me,' and I said, 'Of course I followed you!'” Theroux said. “She's like, 'No you haven't!' I realized I was one of the people caught in the glitch.”

A spokesperson for Facebook, which owns Instagram, issued a statement to CNN about Anistongate and confirmed that the crash occurred a day after her first post. "We are aware that some people were having issues following Jen's profile," the spokesperson said on Oct. 16. "We are thrilled to have this 'Friend' as part of the Instagram community." In her inaugural Oct. 15 post, Aniston shared a selfie with her former Friends co-stars Courteney Cox, Lisa Kudrow, Matt LeBlanc, David Schwimmer, and Matthew Perry. “And now we’re Instagram FRIENDS too,” Aniston captioned the post. “HI INSTAGRAM.”

Theroux’s Lady and the Tramp co-star Tessa Thompson was similarly stunned by the crash. When she asked Theroux during their joint ET interview whether or not Aniston actually “created an A-listed glitch,” he responded, “Like, literally broke Instagram. People were having trouble being recognized as following.” Thompson then replied, “Well, it's good that I waited till past the glitch. I'll just be like, 'Jen, notice me!'”

In a separate interview with Extra on Wednesday, Theroux added that he was proud of his ex for finally joining the social platform. He even explained why he believes she’ll be a good social media presence. “The world’s about to learn what a hilarious woman she is if they don’t already,” Theroux said.

The exes, who announced their split in February 2018 after nearly three years of marriage, appear to be in good terms. Theroux was one of the first to comment on Aniston’s inaugural Instagram post, after all. He wrote, “Woot-Woot!” and hashtagged “#first.” Earlier this year, Theroux even shared a birthday tribute to Aniston, who turned 50 on Feb. 11, on Instagram. “Happy Birthday to this fierce Woman,” he captioned a black-and-white photo of Aniston. “Fiercely loving. Fiercely kind. ....and fiercely funny. ❤️ you B.”

In an interview with Elle in December 2018, Aniston reflected on her marriage to Theroux and explained why she still considered the relationship successful. “When they came to an end, it was a choice that was made because we chose to be happy, and sometimes happiness didn’t exist within that arrangement anymore," she told the magazine.