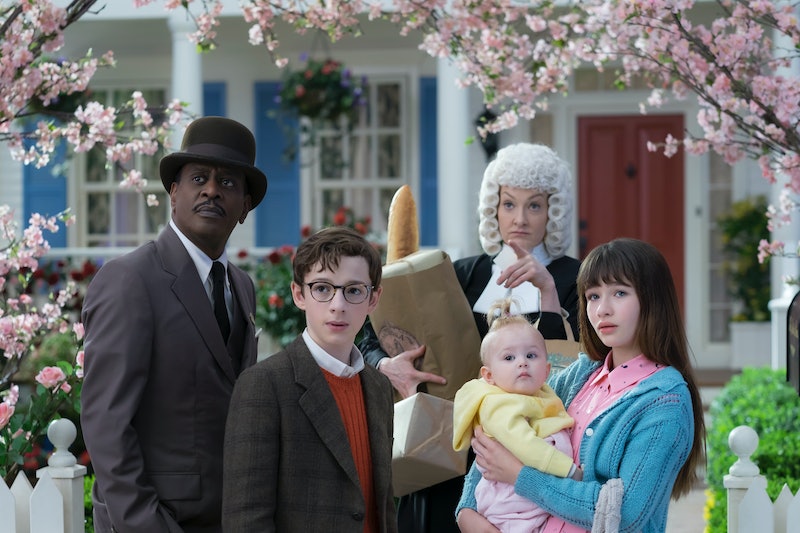 Daniel Handler's fictional universe that he created under the nom de plum Lemony Snicket is in many ways a satire of adulthood and what it means to grow up. A Series Of Unfortunate Events is simultaneously zany and sophisticated. It treats its young audience with a striking amount of respect, and the latest television adaptation does the same. In interviews with Bustle, cast members Neil Patrick Harris, Malina Weissman, Louis Hynes, and Patrick Warburton explained why kids and grown-ups alike will love A Series Of Unfortunate Events on Netflix.

"I think Netflix has proven recently with Stranger Things that that kind of Goonies, Stand By Me nostalgia still holds up pretty well," says Harris, who is an executive producer on the series in addition to his starring role as Count Olaf. "So, the people who read the books in their teens and 20s are now old enough to reflect on it and have different perspectives, and maybe have kids who can watch it on their own."

Even though many of the situations in A Series Of Unfortunate Events are wildly fanciful, the Baudelaire's plight against the ordinary adults in their world, who constantly tell them that they are too young to understand or wrong to feel injustice, is a universal feeling. "In the show," says Weismann, who plays the mechanically-minded Violet, "basically the kids are the smartest people, so I think kids can really relate and say like, ‘I’ve talked to my mom about this once and she didn’t understand a thing I was saying.’”

"I think the material holds up really well," says Harris, "and this notion that adults are too busy and too mired in their own adult complexities to be able to see that standing in front of them is a villain trying to murder the children... I think that kind of irony will play well nostalgia-wise."

"I think a lot of young people get it" says Warburton, who plays the narrator/investigator Lemony Snicket. "They get that, on an intellectual level, they might not have the life experience of their elder counterparts or parents or teachers, but in a way they get just as much and more in a way; they see things and they’ve been exposed to more in this day and age."

Being patronized and condescended to is always frustrating and absurd, he thinks, even if your situation is not as outlandish as the show. The feeling is what translates. In A Series Of Unfortunate Events, as Warburton says, "the kids really do get everything and the adults have ended up in a place where they just aren't cognizant of the stuff around them and they've gotten so distracted that they’ve stopped growing or evolving and the kids are like, it’s right here..."

That doesn't mean that adults will feel slighted or alienated by the series, either. "Adults can watch it and see it and say, 'yeah, yeah, yeah, that’s kind of happened to me,'" says Warburton. "And they can see things in their kids or in younger people that they normally might not see." Sometimes we need that reminder as we get older.

"I think there’s lots of dark aspects that adults will really enjoy," says Hynes, who plays Klaus. "Lots of humor," adds Weismann. "There's definitely something for every age," she says, also noting that plenty of adults (myself included) will be tuning back into the story, having read the books when they were younger.

In fact, many of the ASOUE books were released when I was in High School and a bit beyond the intended reading level, age-wise. However, the literary references, dark humor, and creative use of vocabulary stretched a different muscle in my brain. Though, in retrospect, maybe I was just telling myself that it counted as SAT prep when what I really wanted was a break. My point is, there are plenty of things that older audiences, younger audiences, and everyone in between will love about this series!