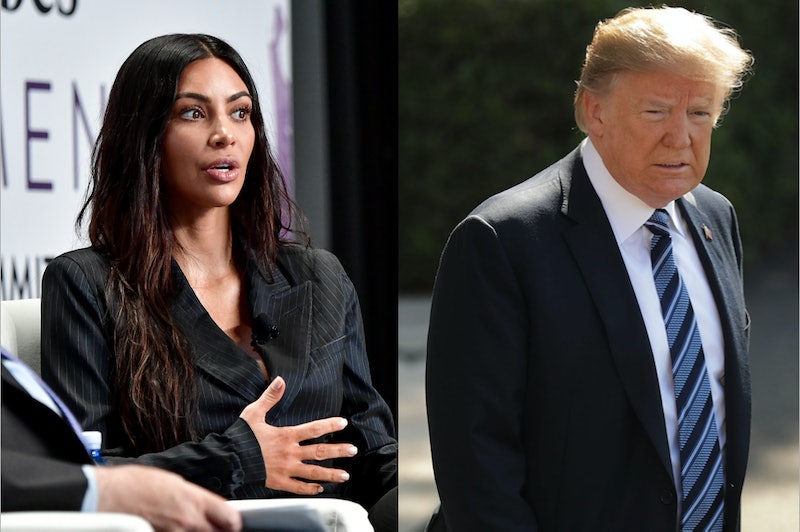 "It was just a simple connection," Kim Kardashian said about her decision to get involved in advocating for clemency in the case of a 63-year-old Alabama woman. On Thursday, Kardashian opened up about meeting with President Trump to Mic, saying she was "hopeful" that he heard her goals for prison reform and that they would eventually come to fruition.

Kardashian visited the White House on Wednesday and had a sit-down with the president concerning the plight of Alice Marie Johnson. The now-63-year-old was convicted of drug trafficking in 1996 and has since spent over 20 years in federal prison with no chance of parole. As a first-time, nonviolent offender with immaculate behavior records during her decades-long imprisonment, Johnson had hoped to be released by President Obama. But she was not one of the 231 who received clemency from the 44th POTUS.

When Mic News asked Kardashian why she had first gotten involved in Johnson's case, the reality TV star said she'd seen Johnson's story online and felt compelled to help her. “I don’t have a personal experience with prison myself, but I believe in family, and her family was torn apart by choices that she made 21 and a half years ago," Kardashian said.

Kardashian also praised the efforts of Jared Kushner in pushing for prison reform. "The president seems to have a passion for everything that Jared [Kushner] has been trying to do, and that just makes me happy that that conversation is just moving forward," Kardashian told Mic News.

Kushner, who functions as both son-in-law and adviser to the president, has been behind efforts to make some dent in passing prison reform. According to New York magazine, Kushner's efforts have been aimed at the operations side of prisons, as well as prisoner release policies. The magazine notes that Kushner's father, Charles, spent time behind bars for illegal political campaign contributions, tax evasions, and witness tampering. Kushner Sr. was imprisoned in Alabama, a connection perhaps not lost on Trump's son-in-law when considering Johnson's case.

But though prison reform is the rare issue that boasts bipartisan support and appeal, congressional action has been stalled by intraparty disagreements on both sides about how to best negotiate the focus. The House overwhelmingly passed Kushner-supported legislation — known as the "First Step Act" — with a vote of 360-59. But the measure has been held up in the Senate, as some hardline Republicans argue there's no need for reform. Sen. Tom Cotton of Arkansas is on record saying the real problem with the American criminal justice system is "under-incarceration."

And not everybody is impressed with Kushner's prison reform focus, either. While most advocates reserve their passion for challenging minimum-sentencing requirements and reducing the number of incarcerated individuals, Kushner's bill homes in on early release for certain prisoners. As Jay Willis argues at GQ, Kushner's bill "focuses not on reducing the volume and length of sentences like Alice Johnson's... and instead creates incentives for certain inmates to get out earlier."

But Kardashian left her White House meeting with Trump optimistic that he would be open to granting clemency to Johnson. "I love you," Kardashian told Johnson over speakerphone in the car ride away from 1600 Pennsylvania Avenue. "You would have been proud of us today."

"She would be such an advocate for people like this in her situation," Kardashian told Mic News. "I think it's definitely a bigger issue that has to be addressed, and I'm glad that I'm starting with her."

"I believe in rehabilitation. And I believe that she is just the perfect person for this," Kardashian enthused. Here's hoping Trump agrees.