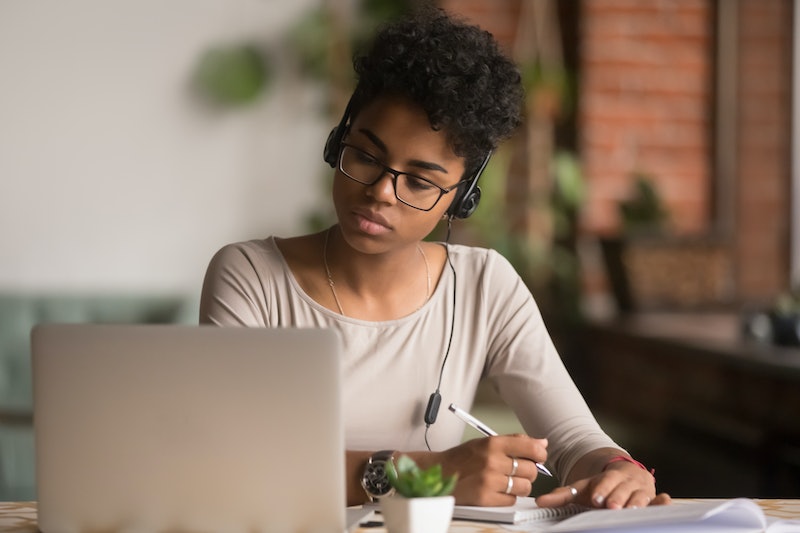 Following the UK lockdown in March, GSCE and A-level exams were cancelled for the first time since the systems were put in place. Students will now be graded based on mock exams, coursework, and predicted grades which may put Black students at risk of receiving lower grades.

A study conducted by the National Union of Students (NUS) in 2011 found that Black students “face a range of barriers in all levels of education,” per the Guardian, including racial bias, stereotypes, inaccurate grade predictions, and lack of attention. Through surveys and focus groups, the NUS study found that some respondents “encountered widely-held stereotypes based on race and attainment from teachers while at school and college,” and that “their teachers did not provide the same level of attention or encouragement they would to non-Black students” leading to the feeling that “they were ‘condemned to fail’.”

Inaccuracies of grade predictions were found to be a major issue in another 2011 study, conducted by the Department of Business, Innovation, and Skills. Only 39.13% of grades from Black students were predicted accurately, which contradicts data released by the Universities and Colleges Admissions Service (UCAS) in 2015 who, per the Times Higher Education, suggested there was “no systemic bias against ethnic minorities in higher education admissions.”

Little seems to have changed since these studies were published. Black students are still finding that their predicted grades are disproportionately lower than the grade they actually achieve, as 18-year-old Josephine Fransilja explains to me via Twitter DM. Now studying at a performing arts school, Fransilja was predicted a grade 3 in foundation maths for GSCE, which isn’t even a pass. She ended up getting a 6 after her mum pushed the school to put her in a higher set. “The headteacher said I was being given a low predicted grade because I didn’t try hard and did everything in my power not to succeed,” she tells me.

Fransilja, who is of Ghanian and Finnish heritage, experienced this again in English Literature, where she was predicted a grade 6 despite getting an 8 in her mock exams and a 9 her actual GSCE. “Overall there was very little transparency,” she says. “The school refused to tell BAME (Black, Asian, and minority ethnic) students their predicted grades, and a lot of us had to push and have our parents come in for any kind of transparency.”

“They wanted to silence us and keep it a secret so their systemic lowballing of BAME students wouldn’t look overarchingly biased, classist, and racist.”

Welsh student Tia Zakura-Camilleri shared similar experiences to ITV News. She was predicted Bs and a C in three sciences, but her final marks were all As. She told the programme that the prospect of her final grades being measured by what the government has proposed scares her. “Everyone likes to think that the teacher will know you best and it can be fair, but at the same time I know some of the connotations with people with BAME backgrounds.”

On March 23, Secretary of Education Gavin Williamson said the use of predicted grades was “to ensure that the distribution of grades follows a similar pattern to that in other years, so that this year’s students do not face a systematic disadvantage as a consequence of these extraordinary circumstances.”

However, the UK’s leading independent race equality think tank Runnymede has published an open letter to Williamson, suggesting that more measures need to be put in place to ensure fairness and equality. “While the COVID-19 crisis has meant that we are working in exceptional circumstances,” the letter reads, “we believe it is important for the Department of Education and Higher Education Institutions (HEIs) to additionally undertake measures in order to ensure a fair, transparent, and robust system.”

These measures include providing teachers “with more guidance and support” in ensuring more accurate predictions, accompanied with “guidance on how to undertake Equality Impact Assessments of final grade predictions.”

More like this
This Is When Netflix Is Going To Start Charging You For Sharing Passwords
By Darshita Goyal
Watch Jacinda Arden’s Devastatingly Honest Resignation Speech
By Sam Ramsden
Twitter Has *A Lot* To Say About The "Single Penalty”
By Sam Ramsden
What The UK Blocking Scotland’s Gender Recognition Bill Means
By Sam Ramsden
Get The Very Best Of Bustle/UK
Sign up for Bustle UK's twice-weekly newsletter, featuring the latest must-watch TV, moving personal stories, and expert advice on the hottest viral buys.