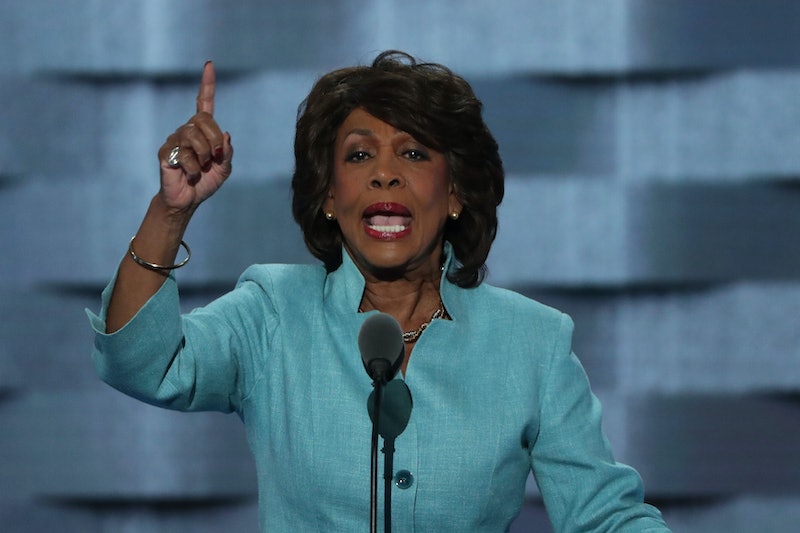 At a rally on Saturday, Rep. Maxine Waters urged Americans to confront Trump administration officials whenever they are out in public. Her impassioned call for on-the-ground protest comes just days after several Trump officials were publicly shamed for working for the president.

"I have no sympathy for these people that are in this administration who know it is wrong what they're doing on so many fronts but they tend to not want to confront this president," Waters said at a Los Angeles rally on Saturday, according to The Hill.

Waters explicitly instructed Trump opponents to directly confront members of the administration wherever they are, encouraging them to "get out and create a crowd."

"You push back on them and you tell them they're not welcome anymore, anywhere," she said. She continued:

Waters received ire from conservatives on Twitter, but was praised in turn by more progressive users. One person who was particularly upset by the representative's instructions was The View co-host Meghan McCain.

"This is absolutely insane - and extremely dangerous," McCain wrote on Twitter. "My father in law works in the administration, does this mean when we go out to dinner we should be ambushed?!? Don’t ever again give me any of the 'when they go low, we go high' lip service."

McCain's father-in-law is Douglas Domenech, who works as the secretary of the interior for insular areas. McCain's father, of course, is Sen. John McCain.

What Waters said at the Saturday rally was a reference to several recent in-person protests that received national attention in the last several days. The first concerned Department of Homeland Security Secretary Kirstjen Nielsen, who was heckled out of a Washington, D.C. Mexican restaurant after a group began chanting at her and a dining partner. Video of the protesters shouting "shame" and "end family separation" swiftly went viral.

On Friday, demonstrators proceeded to gather outside of Nielsen's home, playing audio footage of detained migrant children. Both protests stemmed from the Trump administration's "zero-tolerance" immigration policy, which required that every person caught illegally crossing the U.S.-Mexico border face prosecution. Because children cannot be held in jails, the policy resulted in thousands of children being separated from their families upon crossing.

Nielsen wasn't the only Trump official to be publicly confronted, however. White House Press Secretary Sarah Huckabee Sanders was asked to leave a Lexington, Virginia, restaurant on Friday after the restaurant's owner realized Sanders was a guest. The owner reportedly cited Sanders' work for the Trump administration when asking her to leave.

Sanders tweeted about the issue, which proceeded to dominate the news cycle for the rest of the weekend.

"Last night I was told by the owner of Red Hen in Lexington, VA to leave because I work for @POTUS and I politely left," she wrote on the official White House Press Secretary Twitter account. "Her actions say far more about her than about me. I always do my best to treat people, including those I disagree with, respectfully and will continue to do so."

The rise of in-person confrontations is reflective of the increasingly heightened political tensions in the United States. And with high-profile politicians embracing this form of protest, it's likely they will continue.