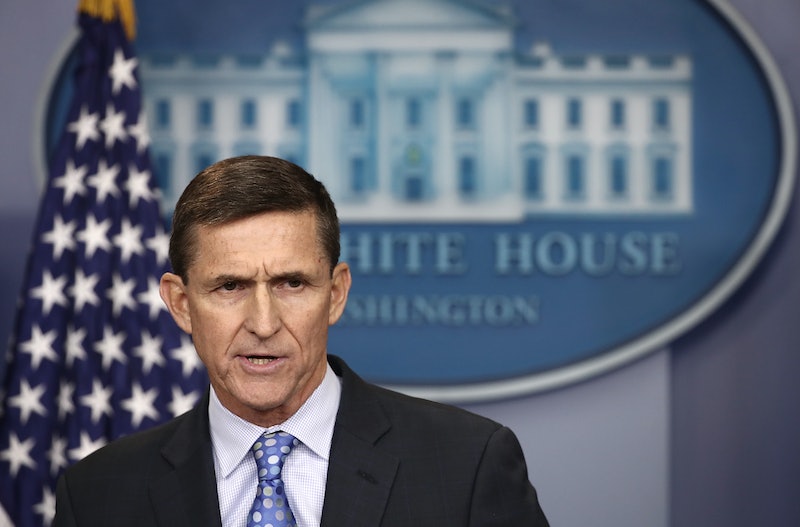 Roughly a week after Special Counsel Robert Mueller brought forth the first set of charges in his investigation into Russian meddling in the 2016 election, multiple sources close to the investigation have reportedly told NBC News more charges may be quick to follow. Mueller reportedly has enough evidence to press charges against Michael Flynn, Trump's former national security adviser, the network reported Sunday. If charges are brought against Flynn, he would be the first former or current member of the Trump administration to be formally indicted in the Russian probe. And that's a big deal, as it could signal Mueller is closing in on the White House.

According to NBC News, investigators reportedly plan to interview multiple witnesses who may be able to shed some light on Flynn's earlier lobbying work, whether he was ever involved in money laundering, and whether he ever lied to or misled federal investigators regarding his overseas contacts. Federal investigators are also reportedly looking into allegations Flynn attempted to sidestep the extradition process and send the Turkish cleric Fethullah Gülen, a rival of Turkish President Recep Tayyip Erdogan, back to Turkey in exchange for a multi-million dollar fee.

Sources also reportedly told NBC News that Flynn's son, Michael G. Flynn, might also be indicted either separately or along with his father. Flynn's son had reportedly worked closely with his father at his lobbying firm, the Flynn Intel Group. As of Sunday afternoon, however, it was unclear exactly what charges the younger Flynn might face or what investigators were focusing on. A spokesman for the Special Counsel's Office declined Bustle's request for comment.

It seems some in Washington weren't surprised by reports signaling Trump's former national security adviser may be the next person to face charges in Mueller's prove. "I've seen documentation, classified and not, of Michael Flynn's activities and charges from Mueller wouldn't remotely surprise me, but we’re still talking about someone who had access to our nation’s vital secrets while working in the White House." Illinois Rep. Raja Krishnamoorthi wrote in a tweet published shortly after the news broke Sunday.

On Oct. 27, White House Press Secretary Sarah Huckabee Sanders claimed the Trump administration viewed the Russian probe as "getting closer to conclusion" in an interview on Fox News' America's Newsroom. Sanders had also said President Donald Trump "has confidence they're going to close this up soon." However, the very next day it was announced that Mueller planned to file the first set of charges in his investigation into Russia's interference in the 2016 election, in a sign the probe would likely continue well into 2018.

Former Trump campaign manager Paul Manafort and his longtime business associate Rick Gates were indicted early last week on 12 counts that include, conspiracy against the United States, conspiracy to launder money, unregistered agent of a foreign principal, false and misleading FARA statements, false statements, and failure to file reports of foreign bank and financial accounts. Although the charges did not center on activities pertaining to the Trump campaign, their filing marked a significant moment in Mueller's Russia probe. It was also revealed last week that former foreign policy adviser for the Trump campaign, George Papadopoulos, had pleaded guilty to lying to the F.B.I.

Flynn's stint as Trump's national security was short lived. The retired army lieutenant general was fired in February after less than a month on the job after it was revealed he had lied to Vice President Mike Pence about the extent of his dealings and communications with Russian Ambassador to the U.S. Sergey Kislyak. It remained unclear Sunday if Mueller had plans to pursue charges against Flynn or his son.