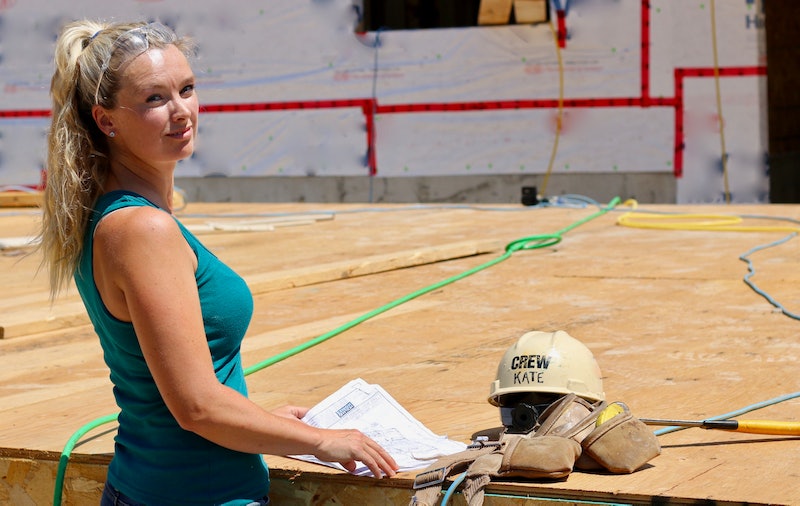 Kate Campbell remembers her first day on a construction job site like it was yesterday. She walked toward a group of men with her head held high, tool belt on, knees shaking. And it was clear how — being the only woman on site — she stood out.

As a female in a male-dominated industry, Campbell acknowledges that it can feel like you stand out constantly. So in fields like skilled trades, where women represent just 7 percent of the workforce, it can be intimidating to not only walk into a job site, but to get involved in that career altogether. That’s why Campbell is passionate about using her platform as a famous contractor and TV personality to inspire young women to explore skilled trades.

In partnership with Olay, which is spotlighting women who are succeeding in historically male-dominated fields, Bustle spoke to Campbell about why more women should pick up power tools and break down gender barriers.

On Her Role Models

"My role models have always been, and still are, my parents," says Campbell. "They’re entrepreneurs, they’ve paved their own path, they’re extremely hardworking, and they’re so supportive. My mom was actually the one who clipped the newspaper ad for the trades course and encouraged me to apply."

On The Most Rewarding Part Of Her Job

"One of the most rewarding things about my job is completing a renovation, seeing a space transformed, and knowing you were the one that did it," she says.

"I also occasionally get messages and pictures from young girls or parents of young girls thanking me and encouraging me to keep [doing what I'm doing]. Ultimately, those messages prove to me that just by working in this industry, I've encouraged others — which in turn encourages me."

On Working In A Male-Dominated Industry

"I love working in this industry. I love the guys I work with, and it’s been the best decision I’ve ever made — but that doesn’t mean it hasn’t come with its ups and downs," admits Campbell.

"I think there are some stigmas and stereotypes surrounding the industry that may make women feel like they can’t or won’t gain entry into it, but I’m seeing those stereotypes fall away slowly. Whenever you’re paving a new path, its not always going to be easy, but I think it’s important for women to know that the number of females in the trades industry is growing."

On Working In The Trades

"I really think people have a misconception about the trades in general," says Campbell. "For the longest time, going to a university has been viewed as the only pathway to success, and if you go into the trades instead, it’s often viewed as a consolation prize.

I think a lot of people don’t realize how adept and intelligent you need to be when in skilled trades, especially when running your own business. You need to be experienced with tools, and you need to have extensive building knowledge, but you also need to know how to run a business, manage money, solve problems, work with clients and fellow employees, and so on. There’s so much more to the trades than people realize.

Some of the most intelligent, intellectual and successful people I know are trades people."

On Why More Women Should Be Picking Up Power Tools

"One of my favorite quotes is, 'You can’t be what you can’t see,'" says Campbell. "I believe that as more women enter the trades and show that it can be done, younger generations of women will feel encouraged to consider a job in the field as well."

She adds, "[if you’re curious about construction] I recommend taking a course, learning some basic skills, or seeking out an apprenticeship. Talk to others in the trades and find a mentor. Do your research, but don’t be afraid to jump in and pick up a power tool, you never know where it may lead."

On Practicing What She Preaches

"I see myself as a positive influence and mentor," says Campbell. "I’ve been given a very public platform, and I believe it’s my responsibility to use it in a way that encourages women to get into male-dominated industries. I actually started a foundation called Build Women Up, which supports programs that help women get into the trades and highlights strong, successful women in male-dominated industries. I believe women need to fiercely fight for and support other women, and this foundation is my warrior cry!"

More like this
25 Inspiring Quotes From Black Women To Celebrate Black History Month
By Kyli Rodriguez-Cayro and JR Thorpe
24 History-Making Black Women You Probably Didn't Learn About In School
By Ayana Lage and JR Thorpe
These Are The Fastest Electric Kettles You Can Buy
By Margeaux Baulch Klein
Twitter Has *A Lot* To Say About The "Single Penalty”
By Sam Ramsden
Get Even More From Bustle — Sign Up For The Newsletter
From hair trends to relationship advice, our daily newsletter has everything you need to sound like a person who’s on TikTok, even if you aren’t.

This article was originally published on Aug. 14, 2018