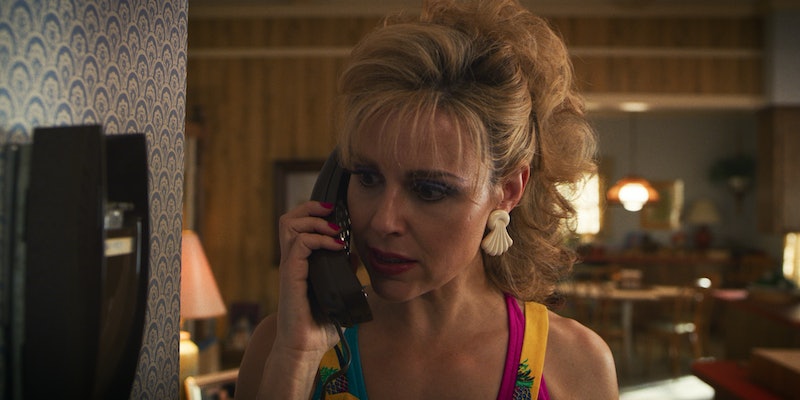 Spoilers ahead for Stranger Things 3. Nancy Wheeler (Natalia Dyer) and her mom Karen (Cara Buono) didn't always see eye-to-eye in the first two seasons of Stranger Things. But in Stranger Things 3, Nancy and Karen Wheeler finally are able to bond and come to a mutual understanding thanks to their respective storylines.

Dyer tells Bustle that previous seasons of the show didn't really explore this fraught mother-daughter relationship, which means that Season 3 has plenty to mine when it comes to shading in the nuances of Nancy and Karen's interactions. "I think there’s a lot there to explore," Dyer says of Nancy and Karen. "The more we see of Karen, the more we see she does have this adventurous side that she’s kind of put away for the sake of family and duty and home life and children, but there’s something else in her. I think Nancy sees a lot of herself [in her mom]."

At the beginning of Season 3, Nancy and Jonathan are working as interns at The Hawkins Post. But while Jonathan develops film as a photographer, Nancy is fetching coffee and lunches instead of gaining experience as a reporter, which leads her to follow a story lead on her own. Meanwhile, Karen looks for adventure outside of her home, spending time at the Hawkins community pool with the other moms, who count the minutes until Billy Hargrove arrives for his lifeguard shift. Karen even begins a flirtation with him.

It all culminates in a tender mother-daughter scene in Episode 4. The Hawkins Post's editor Tom has fired Nancy and Jonathan for continuing to pursue the story without permission, and Nancy is understandably upset when she comes home. Karen expresses concern, and clearly relates to her daughter's struggles in the workplace. She tells Nancy that the real world can be tough, but encourages her to keep pursuing the story: "Most people just stop trying, but you're not like that. You're a fighter."

Dyer loves this scene because it's not just a mother-daughter moment, but it also shows women supporting women on-screen. Buono, meanwhile, says she saw the scene as an opportunity to explore Karen's backstory. "She probably had to forego a lot of her dreams and aspirations to be a mom," she says. "So, I think she has a lot of dissatisfaction in every aspect of her life, except that she's faithful to doing the job of being a wife and mom."

If there's a Season 4, Buono hopes she will get to explore other aspects of Karen's character and get involved with Hawkins' heroic efforts against the evils of the Upside Down. She wonders if Karen would "come out as a swinging fighter" or channel Mad Men's Betty Draper in the iconic scene where she shoots pigeons with a rifle while a cigarette hangs from her mouth.

But as of now, both Stranger Things 4, as well as Karen and Nancy's part in it, remains to be seen. With any luck, the story of the connection between these two isn't over yet.