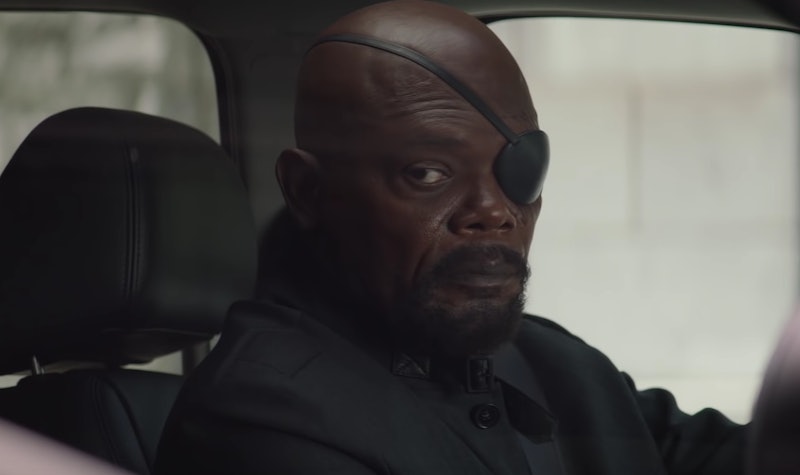 Major spoilers ahead! In addition to its titular, ultra-powerful hero, Captain Marvel also introduces some other characters to the MCU that are already becoming fan-favorites. There's Annette Bening's undercover Kree scientist, Mar-Vell, and a whole new species, the Skrulls. But perhaps the most exciting new addition is Goose the "cat"— who is actually of an alien species called the Flerken. The little gal gets into a lot of trouble during the movie, and it's eventually revealed after an earlier fake out that Goose is the reason Nick Fury got his eyepatch, in a surprising third act twist.

From the first moment that Fury (Samuel L. Jackson) meets Goose at a top secret government base, the S.H.I.E.L.D. agent has a connection with the orange tabby. Carol and Fury have to make a quick escape after the Skrulls attack, and Goose ends up riding along with them. It seems for a while like Fury and Goose could have made an even more compatible duo than Fury and Agent Coulson (Clark Gregg), but on their way back from outer space, Goose swipes at Fury's eye, thereby turning on his biggest fan.

Fury plays off the cat scratch like it was no big deal afterwards — and usually cat scratches aren't. The only problem is that Goose isn't actually a cat! At the end of the movie, when Coulson comes to see him in his office, Fury's wearing a makeshift eye patch, because he actually lost it due to Goose's outburst. Of course, Fury doesn't want people to know that he lost his eye due to what looks like a cat, so, it seems, he started a rumor. Coulson says that he heard that Fury lost his eye in an attack by the Kree while he'd been protecting the Tesseract. And who is Fury to correct him?

The origin story of the eyepatch is funny, but it also hints at the momentous importance of Goose. Yes, really. First of all, MCU fans had already suspected that Fury's injury would happen in a major act of betrayal. As Time points out, Fury references how he ended up needing an eye patch in Captain America: Winter Soldier. In that scene, Fury and Captain America/Steve Rogers (Chris Evans) have a heated discussion which leads Fury to stand up and exclaim, "Last time I trusted someone, I lost an eye."

Due to the gravitas with which Jackson delivered that line, a lot of fans assumed that Fury had lost his eye in a major battle — like the kind that Coulson asks Fury about at the end of Captain Marvel. It turns out — whether they knew this at the time or not — that Fury's big dramatic line was referring back to a cat-like creature taking it swipe at him. It's hardly an epic battle.

As if taking out Nick Fury's eye weren't enough, Goose also proves to be a useful teammate to Captain Marvel and Fury when she uses her Flerken abilities to hold the Tesseract in her mouth. As the Marvel Wiki confirms, Flerkens can store entire universes in their mouths, which is why that works. Goose isn't the common house cat she appears to be, and she might just prove to be an invaluable addition to the Avengers in Endgame.