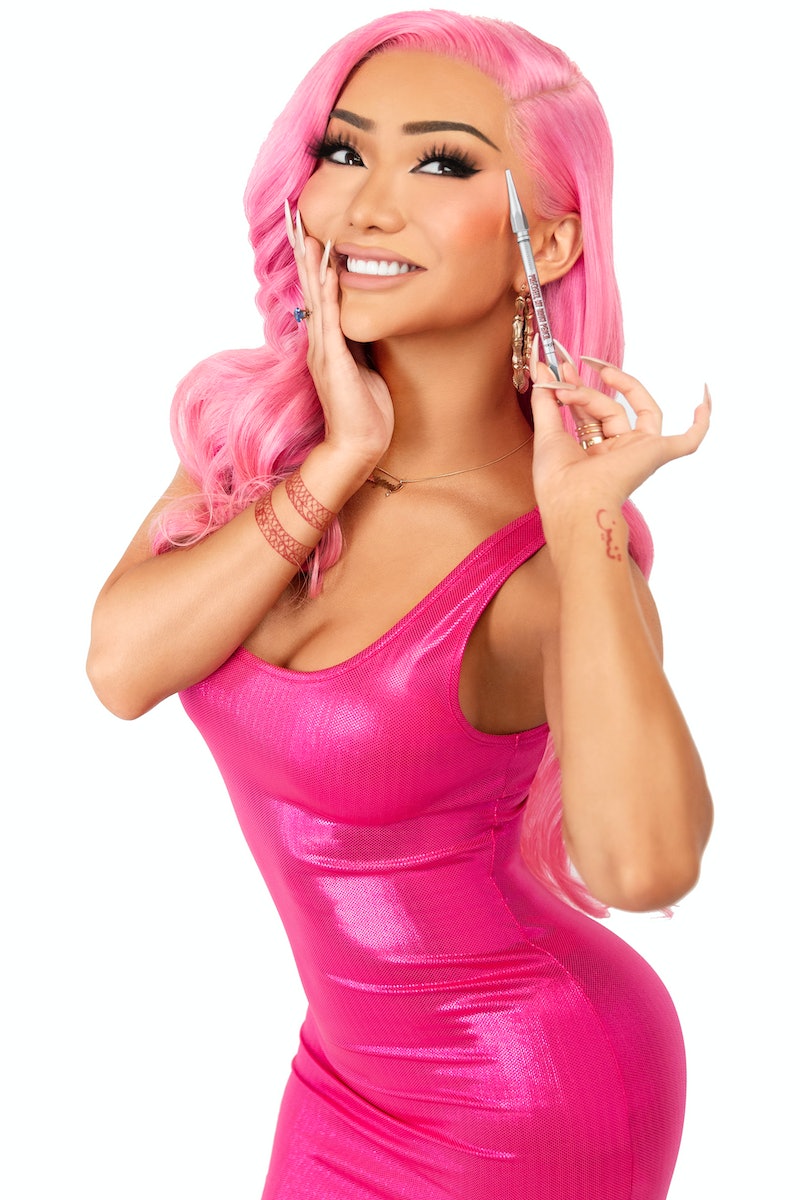 Nikita Dragun is laughing on the other end of my phone. She just cracked a joke about the tip of Benefit's brow pencil. If you know the influencer, you can likely guess the type of joke she just made. But it's her humor that makes Nikita Dragun's new Benefit campaign so good. In a series of videos, Nikita moves through two rom-com inspired scenarios. Each centers on what she dubs "boys and brows," but when speaking with Bustle, the YouTuber — who has over two millions subscribers — explains why her work with Benefit is more than just cute videos and glam photos.

Nikita is at her pre-birthday brunch when she hops on the phone to chat with me, but she's more than happy to take time to discuss her new Benefit campaign. According to the influencer, working with the brand doesn't feel like a traditional partnership — instead, it feels like working with your family. Nikita recalls that Benefit reached out to work with her far before she even reached 100,000 followers. Beyond that, what she loves most about working with the brand is that they're "willing to push it." In her new campaign, she and the brand are doing that in a way that's speaks directly to the guru.

Those who know Nikita know that she is an out and proud trans woman, and she appreciates that the new campaign doesn't center her identity, but instead allows her to inhabit a space typically reserved for cis gendered persons.

In the first of two videos, Nikita stars as a woman tasked with finding a way to get a brow in 10 days (get the How to Lose A Guy in 10 Days reference?). The solution is obvious. It's Benefit's Gimme Brow and the formula's volumizing gel. And while the clip will surely make fans want to hop to their local Sephora, for Nikita, it offers an opportunity to be seen in a way that's not exploitive or a way to check off an inclusivity box.

"The center of the actual campaign wasn’t even my trans identity," she tells Bustle. "It’s just me being a regular ordinary girl trying to fall in love and figure out my brows. That’s what it’s really about. But I'm visible as a proud trans woman. I do love the fact that it’s not really exploitative in any way. It’s just about the brows and me trying to find love, which is just my daily life: brows and boys."

Nikita's Benefit campaign doesn't stop with the over-the-top cute rom-com recreations. The influencer will also be on the Benefit fixture in Sephora stores nationwide, and knowing she'll be able to walk in and see her face makes her recall the days when she'd shop at Sephora as a kid.

"I would obsessively go to every single Sephora in a 50 mile radius – every single one," she tells me, "I didn’t grow up in the most wealthy family ever, and I couldn’t really afford a lot of products. I was a little boy, so I was nervous to even be shopping around in Sephora. For me to have someone like myself — who’s very proud and very visible — is so cool and crazy. Like I said, everything I do is an achievement for me, but I also think about how beneficial it is for my community."

Nikita's journey hasn't always been easy. The YouTuber began documenting her transition on her channel in 2015, and she shares that, at times, she felt that she had to force herself to film. Ultimately, though, her decision to put her transition on the internet was to help others. "I started sharing everything out of frustration," she says, "There really wasn’t anyone talking about it at the time. When I uploaded my facial feminization surgery, no one was even showing their surgery, not even a stitch. I wanted to be honest and try to help someone else."

If Nikita's fans are any indication, she has really achieved her goal. In fact, she says that she is surprised not by the subscribers who approach her, but by the number of parents who want to talk to her instead. They often tell her about their trans sons or daughters and how she has helped them understand their children better.

But Nikita isn't just creating content for her fans or those who support her. "Even if people are new — not as educated — and do have a bit of ignorance about trans identity and comment something crazy, I feel like I’m exposing people to things they haven’t seen because I, for sure, didn’t see trans people growing up."

Between her new Benefit campaign hitting Sephora stores soon and her already successful influencer career, Nikita Dragun is certainly more visible than ever. And she has one clear message to those who might be struggling to stand proud, like herself: "Accept yourself first, and everyone else will follow."