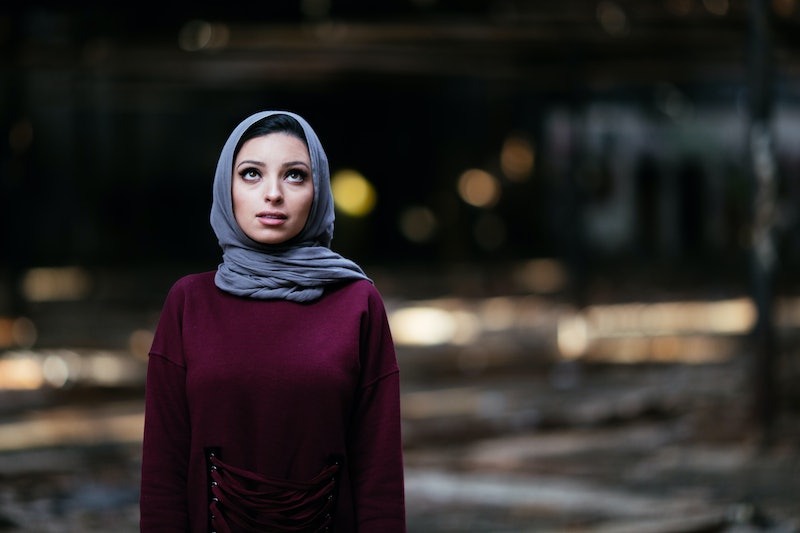 Parents often tell their children that they can be anything they want to be when they grow up. But, a lot of women find out that's not the case as adults. A lack of representation, opportunity, and encouragement in professional fields such as chemistry, sports, construction, and engineering have hindered many childhood dreams. Yet being relegated to a traditionally female role wasn't good enough for the women featured in Noor Tagouri's show A Woman's Job, an original new series on Newsy.

The 23-year-old journalist at Newsy spent part of 2016 profiling women nation-wide who work in male-dominated fields for the six-episode series. Tagouri tells Bustle she "wanted to find them and celebrate their stories and really learn from their successes and their hardships and their struggles and insecurities and how they really built the foundation that they succeeded on and how they continue to thrive."

The Muslim journalist knows all about stirring up a little controversy in male-dominated and conservative fields. Already known by People magazine for her ultimate goal of being the "first hijabi news anchor on commercial U.S. television," Tagouri made a splash when she was interviewed for Playboy magazine as one of their "Renegades of 2016."

In addition to debunking the archaic stereotype that women can't do the same work men are capable of, Tagouri tells Bustle why she's intent on making people uncomfortable with her show.

"I want people to do a double take on themselves and really do some reflecting on why they ever thought that these jobs were meant for men and how we really need to encourage people of all genders to thrive and succeed in whatever their passions are without the societal expectations placed on people's identities."

Newsy debuted the first two episodes of A Woman's Job just in time for International Women's Day on Wednesday, March 8. Tagouri also hosted a panel event at the National Press Club in Washington, D.C. with the two women featured in the episodes. The first episode of A Woman's Job highlights the career of Dr. Jen Welter, a football player who became the first female coach in the National Football League in 2015. When asked how she built her mental strength to play football, Welter said she simply had to own who she is. "To play in a man's world, you don't have to be a man," Welter said. "You can actually be better in your own way. You should be very much a woman in a man's world because that's what makes you special — to add that voice."

The panel also featured Patrice Banks, who owns The Girls Auto Clinic. The mechanic, whose episode airs on March 15, said the automotive repair industry is so male-dominated that she was rejected for jobs even after offering to work for free. As a result, Banks was determined to not only be a role model for her employees but also provide them with the tools they need to succeed. "To me, it's about giving people an opportunity to shine," Banks said. "To be aware of what their strengths are and to give them resources to make their contribution."

Tagouri has already received backlash for A Woman's Job by some men who deem the program to be "sexist." However, the journalist says that old-school way of thinking is all the more reason for men to check out the show. "They feel challenged with their masculinity and identity," Tagouri says. "They feel like women have a specific role to play and they don't realize that the perspective of womanhood and redefining womanhood is something that's happening right now."

To women who are struggling to break into the career of their dreams, take notes from Tagouri. She realized her identity as a woman and as a Muslim was more meaningful and more powerful than the defeat she felt after being rejected from countless jobs. "Whatever you think your disadvantages are based on what your identities are, don't look at them as disadvantages," she says. "Look at them as advantages. Look at them as perspectives that you're going to bring in. Don't be afraid to stand up for yourself. If it's a passion that you have then work towards it by any means necessary."

More like this
Wimbledon Alters All-White Kit Rule Amid Candid Period Discussions
By Catharina Cheung and Rachel Mantock
These ‘Love Actually’ Plotlines Are “Out Of Date,” According To Director Richard Curtis
By Grace Wehniainen
Amanda Gorman Shared A Powerful Message On Meghan Markle’s Penultimate Podcast
By Darshita Goyal
Claire Foy & Rooney Mara Revisit A Devastating Tale In 'Women Talking'
By Bustle UK
Get Even More From Bustle — Sign Up For The Newsletter