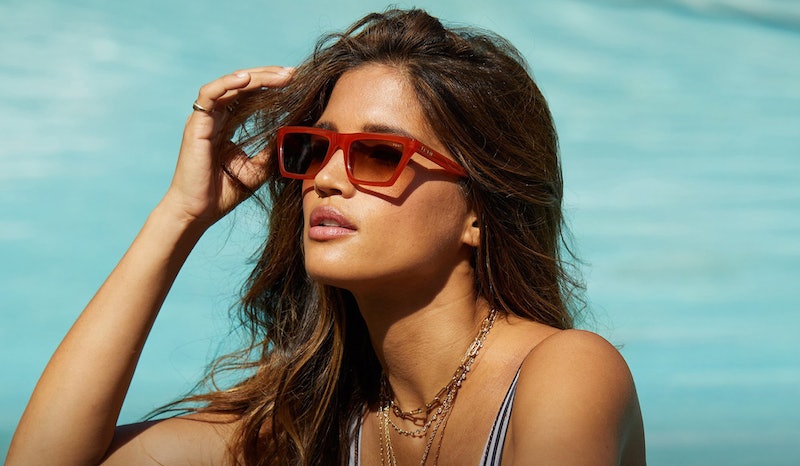 If eyewear is one of your favorite ways to accessorize, then you know it's been a fun (and funky) year for sunglasses. From the teeniest, tiniest shades to '90s-style frames your dad might've worn, people have been breaking out of their comfort zone and sporting bolder styles beyond the classic aviators and Wayfarers. And while those retro and unique styles are still going to be popular this summer, one color will be the most apparent. According to fashion forecasters, orange sunglasses are going to be everywhere for the warmer months ahead. In fact, Pinterest reports that orange sunglasses pins are up 154 percent since January 2018.

"Orange-tinted lenses are this summer's update to rose-tinted lenses, as seen at Coachella, as well as on the runway by brands like Missoni, Altuzarra, and Dior," Hallie Spradlin, Accessories Editor at Fashion Snoops, a trend forecasting agency in New York City, tells Bustle. "Additionally, major influencer eyewear brands like Poppy Lissiman and Etnia Barcelona also feature orange-tinted styles so I think they will remain a huge trend for summer."

But it isn't just about orange lenses — orange frames are also becoming a must-have. Jake Kassan, co-Founder of MVMT, tells Bustle that their newest sunglasses collection features styles in an orange hue, all of which rose to the top and become best-sellers.

"The collection is our first to feature our new 'milky brick' colorway. This orange hue was largely inspired by terracotta roof tiles found in coastal communities around the world. Our milky brick sunglasses (in multiple frames) were the most sought after at all of our Coachella [events] earlier this month."

If you want to get in on the trend before the rest of the world does, here at 10 styles to shop right now.