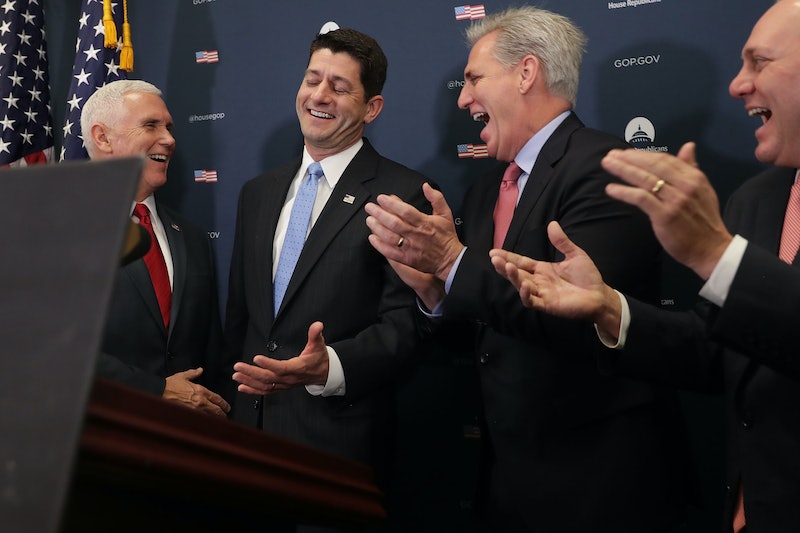 On Tuesday, the Republican-led House of Representatives passed HR 7, a hardline anti-abortion bill that would make it impossible for some state insurance exchanges to cover abortion, and also encourages private insurers to stop covering termination. Like many red-tape anti-abortion bills, the Republican-sponsored bill obstructs the passage to obtain an abortion — specifically by making the process prohibitively expensive for many women. In particular, low-income women and young millennials would struggle to pay for an out-of-pocket termination and would be hit hard by the bill becoming law.

It's disheartening that the House's passing of this bill, which follows President Donald Trump signing an executive order to bring back the Global Gag Rule on Monday, comes just days after the Women's March. In spite of a wide array of women, men, and children taking to the streets to protest women's rights in literally every single state, the Republican-controlled Congress determined Tuesday that the country will be best served by severely limiting many young women's access to a lawful process.

As Vox reports, HR-7 would stop federal insurance programs from covering women's abortions — not only for Medicaid users, but also for federal employees, members of the military, Native Americans, and those who utilize private insurance through the Affordable Care Act. In addition, under HR-7, small businesses and women will no longer be able to claim tax credits from the government if they happen to use a plan that provides abortion coverage, meaning that these businesses would have an additional incentive to avoid using an insurance plan that supports abortion coverage.

Basically, HR-7 is the Hyde Amendment codified into permanent law — and that's long been a thorn in liberals' sides, partially because it disproportionally affects low-income women. If low-income women cannot afford any insurance plan but Medicaid, and Medicaid cannot provide coverage for abortions under HR-7, then these women are put in an impossible situation: Find up to $1,500 to fund a termination, or continue with the pregnancy. The bill is discriminatory because, among other things, it robs poor women of options by essentially removing abortion from a government program intended to offer them medical options. It's no surprise that in states that have restricted access to abortion, women are increasingly turning to self-terminating.

That's without going into low-income women being a demographic more likely to experience an unintended pregnancy (which, according to the Guttmacher Institute, is nearly one in two pregnancies in the United States). Low-income women are less likely to receive fair and accurate education about contraception, and they may also find contraception more difficult to access. This, of course, leads to an increased likelihood of unintended pregnancies, which often leave women without hundreds of dollars available to spend on a termination in an impossible situation.

"This could spell disaster for the availability of abortion coverage for women on private insurance plans across the nation," said NARAL's Ilyse Hogue in a statement.

It's been a frankly devastating few weeks for women's access to healthcare, between what appears to be the imminent repeal of Obamacare, the executive order to bring back the Global Gag Order, and now a bill that limits abortion access to the very people that need it most.

You can fight this bill by calling your senator and telling them about your opposition to HR-7. Here's how to contact them right now.