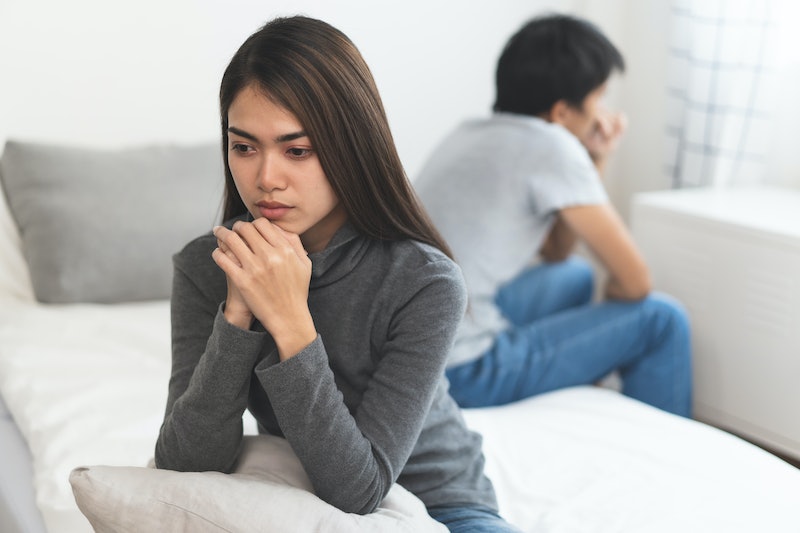 It may not seem like it, but anger is a pretty complicated emotion. Many times it's not a case of someone just being mad. According to experts, there is a connection between anger and vulnerability. When someone's lashing out, there's usually something more going on beneath the surface.

"Anger is seldom a primary emotion, meaning there is usually some other feeling beneath it like hurt, embarrassment, or shame," Estepha Francisque, LCSW, psychotherapist who specializes in relationships, tells Bustle. "Those emotions are often way more unpleasant to feel than anger. People often get angry when they're feeling vulnerable as a protective measure."

Being vulnerable is necessary in order to form close relationships with other people. You can't have true intimacy in a relationship without it. But the reality is, nobody really likes feeling vulnerable. Being vulnerable means exposing the aspects of yourself that you're unsure of. It's hard because you're opening yourself up to the possibility of hurt, rejection, and judgment.

While feelings of embarrassment and shame can make you feel weak, anger can make you feel strong and empowered. It's easier to lash out than admit that you're feeling small. If you know you did something wrong, it can be simpler to get defensive than admit that you made a mistake. That's just one reason why people mask their vulnerability with anger. But there can be other things going on as well.

Being Vulnerable Can Put You In Fight-Or-Flight Mode

"Underneath anger is, very often anxiety," Emily Pfannenstiel, LPC, a licensed professional counselor who specializes in relationships, tells Bustle. "When people are feeling vulnerable, they are feeling anxious. They're exposing a part of themselves that could potentially get hurt."

When you feel safe and secure with someone, being vulnerable can be a really positive thing. It may be scary initially, but it can leave you feeling a lot closer to another person. But if you have a history of getting let down by others when you've opened up, you'll respond to your feelings of vulnerability by getting anxious.

Anger is the "fight" response. When that response is activated, your body becomes prepared to fend off attacks. "The body sends strong energy out in the form of actual fighting, or nonverbal and vocal cues that convey a clear message to the other person's nervous system to 'get away' or 'back off,'" Helfrish says.

If someone has unresolved trauma from childhood, they may be more prone to anger when they start feeling vulnerable in romantic relationships. It's why some people start acting cold and distant when you're in a phase of getting closer and intimate.

If you're in a situation where someone you love gets angry when they're feeling vulnerable, it's important to take care of yourself first and foremost. Also, realize that you can't control anyone but yourself.

"Being vulnerable takes an incredible amount of trust and feeling of safety when opening up to a partner," Diana Venckunaite, certified life and relationship coach, tells Bustle. "If someone has a hard time being vulnerable, make sure that you start to create a safe space where they can be themselves."

If you're the one who has trouble opening up and being vulnerable, Helfrish says trauma-focused psychotherapy can be beneficial. This can help to resolve past trauma so you'll be less reactive to feeling vulnerable.

More like this
Here’s How To Reignite The Spark In A Sexless Relationship
By Vanessa Marin
Zosia Mamet Opens Up About Her Eating Disorder
By Zosia Mamet
An Honest Review Of The TikTok-Famous WalkingPad
By Kaitlyn Wylde
Are Gemini & Gemini Compatible In A Relationship?
By Kristine Fellizar
Get Even More From Bustle — Sign Up For The Newsletter