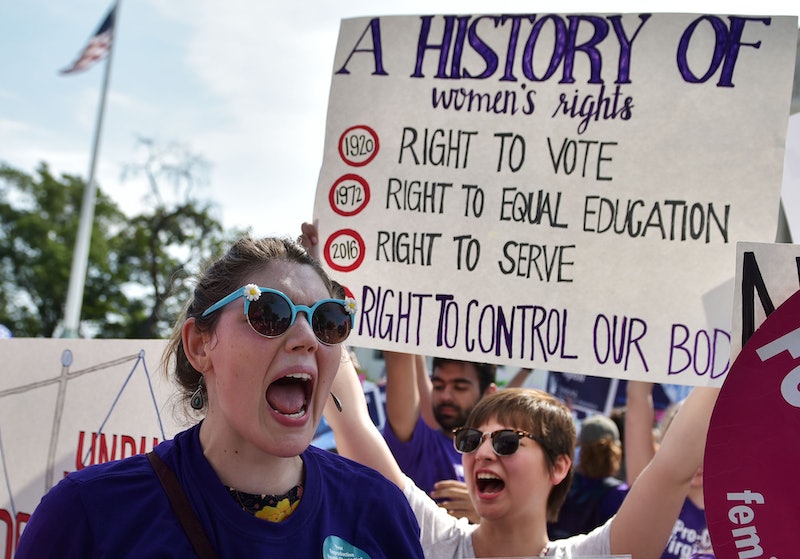 Despite the fact that the landmark reproductive rights Supreme Court decision, Roe v. Wade, occurred more than 40 years ago, stigma surrounding abortion stories is still disturbingly strong. Worse, considering Donald Trump's determination to appoint anti-choice judges and his proclamation last spring that if abortions are banned, women seeking them should be punished (he walked back from that claim), abortion stigma could be given even more room to thrive under a Trump presidency. This is exactly why it's crucial for concerned women to join forces and stay loud about the realities of abortion and taking care of our reproductive health.

Just two weeks ago, House Speaker Paul Ryan announced that the GOP plans to defund Planned Parenthood under a Trump presidency. While the vast majority of services provided by Planned Parenthood are not related to providing abortions (only 3 percent, in fact, is devoted to abortion services, according to its website) and no federal funding goes to abortion services, there's a larger problem with a mistaken perception of the organization. "Planned Parenthood has become a proxy battle for a much bigger, decades-long war over legal abortion," as Vox's Emily Crockett wrote.

Even before this most recent attack on Planned Parenthood, though, more reproductive rights advocates were realizing that so much of the misinformation and misperceptions about abortions stemmed from the silence surrounding women's experiences. That inspired Amelia Bonow and Lindy West to co-found the website turned movement known as Shout Your Abortion.

"'How did we never talk about this when we’ve been friends for 5 years?' It made it very clear that it was time for people to put their skin in the game."

It was when the House voted to defund Planned Parenthood in September 2015 that the hashtag #ShoutYourAbortion was born. In a phone interview with Bustle, Bonow shared how posting a Facebook post about her abortion spun into an international movement, she said.

"It was the day after the House had voted to defund Planned Parenthood, and I spent the whole day crying instead of writing a paper for grad school," Bonow said. "I wrote up my story and decided to post it online. I sent a screenshot to my friend Lindy [West]. Then, she put it on Twitter and that caused it to reach international audiences."

Even before co-founding Shout Your Abortion, Bonow recalled conversations with women where they'd share their stories one by one, slowly realizing how normal abortion was.

"If we had already openly broached this and dismantled the widespread stigma that accuses women of murder for abortion, we wouldn’t be seeing legislation that's so profoundly out of touch with people’s lives."

"I kept having these conversations with women in my life where we were talking about what was going down, and we were horrified. Often, I would bring up my abortion and they would be like, 'I had one, too!'" she said. "Then we’d be like, 'How did we never talk about this when we’ve been friends for 5 years?' It made it very clear that it was time for people to put their skin in the game."

There have even been formerly anti-choice people who have been touched by the site, according to Bonow. She shared that a woman from a small town in Texas wrote to Shout Your Abortion's website a few months ago, revealing she was "from a religious family" and "just could never understand what would make someone feel that they had to do that." According to Bonow, the woman wrote that, "Now I’m pregnant, and because of circumstances with the man, I know I have to have an abortion. I never would have felt like I could make this decision if I wasn’t given the opportunities to read these stories and realize that abortion isn’t something that ‘only bad people do."

"We really believe that people need to be able to engage with this issue however they want."

It's stories like those that convince Bonow that more women will need to stay loud and come forward with their abortion stories after Trump is sworn in as president. While it might feel easy for women concerned about protecting reproductive rights to give into despair under a Trump presidency, Bonow emphasized, that now, more than ever, we need to stay loud.

"With abortion, it’s pretty easy to see that we’re going to have a grave decrease in access. To me, there’s never been a clearer, more necessary time to seize this moment and double-down on doing the culture change work," Bonow said.

"The fact that we haven’t done that work yet, is part of the root that caused this toxic shame-based culture to thrive. If we had already openly broached this and dismantled the widespread stigma that accuses women of murder for abortion, we wouldn’t be seeing legislation that's so profoundly out of touch with people’s lives."

In the face of a Trump presidency, Shout Your Abortion's latest efforts are going beyond getting more women to talk about their abortions. The group has developed a set of tools to encourage people to host their own educational events with pro-choice films and create their own book clubs to reduce abortion stigma. The group is also organizing a reproductive justice teach-in in Chicago during inauguration weekend, as well as an already sold-out fundraising concert on Jan. 20, the night of Trump's inauguration.

Trump's inauguration weekend happens to closely coincide with the anniversary of Roe v. Wade, Jan. 22. Bonow and people linked up to Shout Your Abortion are helping organize community events for the 44th anniversary of the Supreme Court decision. "We are doing this thing called #TogetherForAbortion, which is getting people to do abortion-related things in their community," Bonow said. "We really believe that people need to be able to engage with this issue however they want. If you go to #TogetherForAbortion you can sign up to host an event. It can be super small and informal, you can just gather a few friends and go to happy hour and talk about how you feel about reproductive rights under this administration."

During the upcoming administration, Bonow said she hopes that Shout Your Abortion can continue to serve as a haven for expression and grassroots energy. "Once people get started, there’s so much energy around people wanting to resist," Bonow said. "We want to help people harness that."

More like this
24 History-Making Black Women You Probably Didn't Learn About In School
By Ayana Lage and JR Thorpe
25 Inspiring Quotes From Black Women To Celebrate Black History Month
By Kyli Rodriguez-Cayro and JR Thorpe
6 Organizations Fighting Police Brutality That You Can Support Right Now
By Syeda Khaula Saad and JR Thorpe
This Is When Netflix Is Going To Start Charging You For Sharing Passwords
By Darshita Goyal
Get Even More From Bustle — Sign Up For The Newsletter
From hair trends to relationship advice, our daily newsletter has everything you need to sound like a person who’s on TikTok, even if you aren’t.