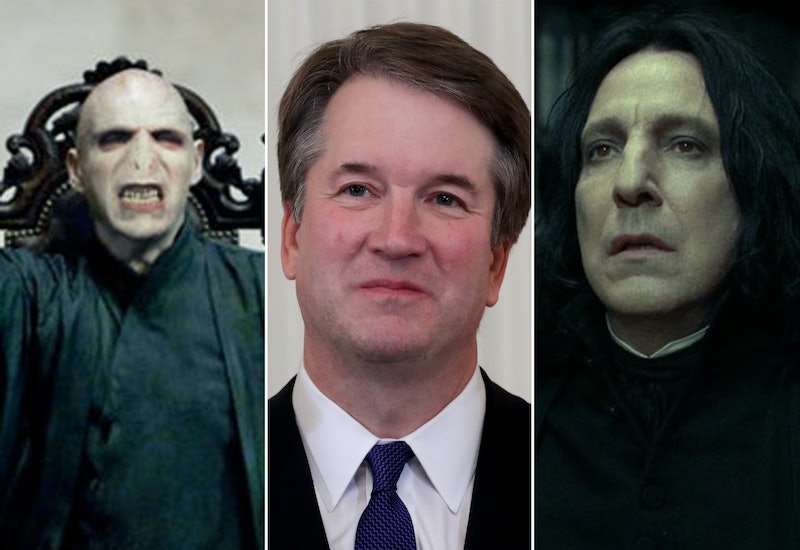 Our muggle political system seems just as troubled as the Ministry of Magic was during the Second Wizarding War. And now Professor Snape has called Brett Kavanaugh "Lord Voldemort." That insult of Trump's nominee to fill Kennedy's seat on the Supreme Court is extreme, but Snape has evidence to back it up.

No, J.K. Rowling has not started writing another Harry Potter book, nor has Alan Rickman spoken out on Trump's SCOTUS nominee from beyond the grave. A law professor at American University named Bill Snape gave an interview to BuzzFeed News. This Snape, who is a Center for Biological Diversity senior counsel and not Hogwarts' potions professor, is the Professor Snape in question.

"He is pretty consistently anti-environment on every front," Professor Snape told BuzzFeed News. "I call him Lord Voldemort."

Kavanaugh, the 53-year-old U.S. Court of Appeals judge for the D.C. Circuit these past years was nominated by Trump on Monday. He's considered a right-wing judge generally, but activists and academics, like Professor Snape, argue that he's particularly bad on the environment. Regulations of pollution and climate could be at risk.

The Natural Resources Defense Council president, Reah Suh, laid out online just how high the stakes are. "The next justice will cast pivotal votes on the kind of world we leave to our children," Suh said in a statement. "These decisions will impact our daily lives for generations to come, and the stakes could not be higher — for our families, our communities and our country."

The Wall Street Journal reported that Kavanaugh, like Gorsuch, is skeptical "whether courts are giving administrative agencies too much latitude" when they decide how to interpret statutes when there is a dispute.

If Kavanaugh's thinking were to become a Supreme Court opinion, it could mean that the government agencies tasked with regulation are more limited in what they can do.

A past example of just that is when the court rejected President Obama's attempt to have the EPA require power plants to reduce their emissions. Kavanaugh wrote the Appeals Court opinion that SCOTUS borrowed from to come to its own decision.

Kavanaugh wrote the "problem here is that EPA did not even consider the costs." He continued, “And the costs are huge, about $9.6 billion a year—that’s billion with a b—by EPA’s own calculation.”

This is important, Richard Lazarus, a Harvard law professor, explained to The New York Times. Most modern regulations are developed by the agencies themselves instead of Congress. That would be a problem if Kavanaugh's thoughts become SCOTUS opinions.

"Congress stopped making clean air laws after 1990, so the E.P.A. has to work with increasingly tenuous statutory language," Lazarus told The Times. "In effect, his approach to environmental law would make it harder to address current problems so long as Congress remains out of the lawmaking business.”

Kavanaugh is not explicitly for global warming, but he doesn't see the court's role in protecting the environment. He says that should be Congress. "The task of dealing with global warming is urgent and important,” he wrote in a 2012 dissent. But, he continued, “As a court it is not our job to make policy choices."

Still, that's more than enough for environmental groups to come out swinging against his nomination. "Kavanaugh has a record of consistently ruling against environmental protections and has opposed efforts to fight climate change," the League of Conservation Voters tweeted. "We will fight this every step of the way."

Entrusting the country's (and world's) environment to a "Lord Voldemort" would be a hard sell to the average American. Whether the Senate agrees is another story.