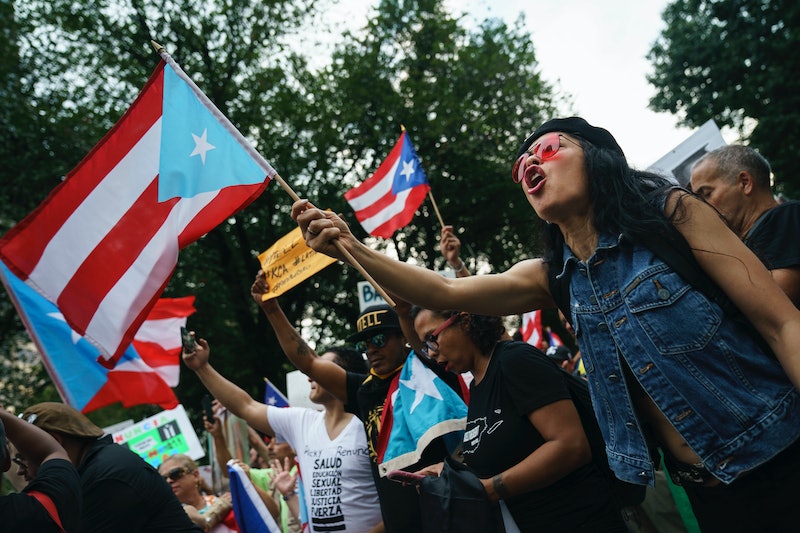 In this op-ed, Adriana M. Martínez Figueroa, writer and creator of #ReadLatinx, places the resignation of Governor Ricardo Rosselló in context with past protests in Puerto Rico.

There’s a legend in Puerto Rico. In 1797, while the Spanish still reigned over the island, a British armada attempted to overtake it. There was fighting, a blockade, and probably many other violent actions that happen during a battle. But while the British were fighting, the citizens of San Juan gathered for a rogativa, where a group of believers get together to pray and beg God to intercede for them in a time of crisis. The group, led by Catholic women, walked in procession through the streets in the middle of the night, their fires and faith lighting the way. What we now know as Old San Juan is built tall enough to give it high ground during battles, and from the streets that these people walked, you can see the bay all the way to the coast of Cataño. The night of La Rogativa, the British saw the fires and thought Spanish reinforcements had arrived. They ceased firing and retreated, or so the legend goes.

In Old San Juan, there is now a statue that commemorates this event. It stands just a few steps away from La Fortaleza, the governor’s mansion, where the majority of the past two weeks of protests have taken place.

The protests began when the Center for Investigative Journalism (CPI) published over 800 pages of leaked group chats involving Governor Ricardo Rosselló and his cronies on July 13. Under the cloak of privacy, these officials let out homophobic, transphobic, misogynistic, fatphobic, classist, and racist remarks, among other comments about the usage of government money. It all boils down to the machista rhetoric of privileged Puerto Ricans. We’d seen this rhetoric underlying some of Rosselló’s policies, yet the public previously cried that local activists’ reaction to those policies were overblown. Instead of the British attacking the island, it was the government turning the cannons toward its own citizens and firing away at an already traumatized population.

People will tell stories of how we protested in front of La Fortaleza.

And so the population took to the streets — mainly, to the street leading up to La Fortaleza. This time, there was no fire, but there was faith that people would be rightfully outraged at this attack.

There is no protocol when it comes to Puerto Ricans and our anger. There’s no polite way for people to say, “Enough!” There’s no etiquette for outright revolution. Underneath the “spontaneous” meet-ups and protests is a vein of local organizers, grassroots organizations, and someone who knows someone, because on an island everyone knows everybody. It’s consciousness-raising done on the go, because we need change now, not later.

Protests hadn’t worked like this before because no one cause had affected such a large group of people in one go. Students at the University of Puerto Rico protested against La Junta and the closing of campuses across the island that lasted for months in 2017. Feminist groups fought against the mistreatment of women and raised the alarm to the ongoing femicide in June. In April 2017, the trans community took over the Capitol after the proposal of a bathroom bill that would effectively discriminate against them. All of these efforts failed to gain traction the way this one did.

This time, so many different people had been targeted through the leaked group chat and marginalized by the governor and his cronies. The chat was merely the catalyst for most Puerto Ricans to speak out against the traumas that we've carried for years. Add the constant policing of protesters, the threat of violence, and a colonial status that’s been compounded for over 500 years to this unstable formula, and it’s no wonder we’re loud and angry.

The public might see a celebration when they see us dancing The Electric Slide (El Pasito, as some of us call it), chanting, or playing drums and pleneras. While the protests were a celebration of many groups who have been marginalized in some way by the administration, know that we are still frustrated. We sang and danced and screamed Wednesday night as we heard the announcement that Rosselló would be stepping down on Aug. 2. But there is still much to do.

Perhaps 200 years from now, our protests will have gone down as a legend just like La Rogativa. People will tell stories of how we protested in front of La Fortaleza for two weeks until the governor resigned. All I know is that our faith in change and the fire we’ve carried for so many years will lead our way as we continue this fight.