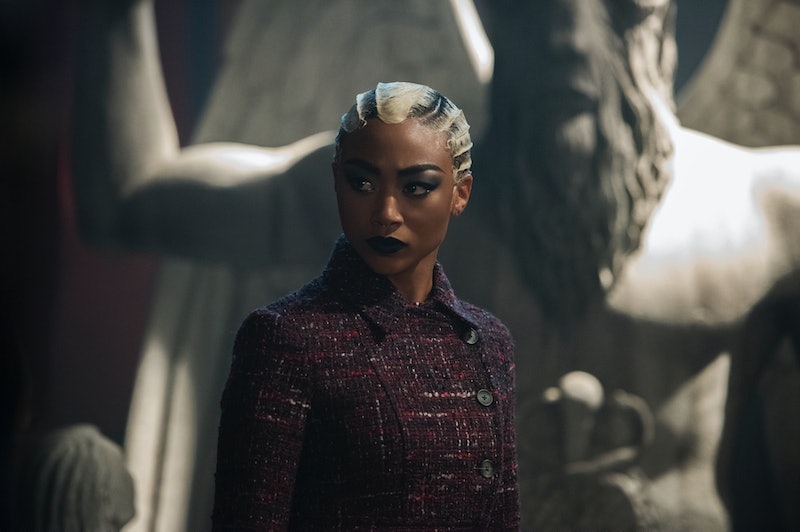 The Chilling Adventures of Sabrina isn't your average tale about teenagers — or even about teenage witches. Even the girls who rule the school in a triangular formation aren't your typical queen bee bullies. Sabrina and the Weird Sisters — who consist of leader Prudence and her sidekicks Agatha and Dorcas — aren't friends on CAOS, but they're not straightforward enemies, either. Their rivalry is complicated, Prudence actor Tati Gabrielle explains to Bustle, and it goes much deeper than the often reductive popular girl vs. the outsider dynamic.

Prudence is the eldest of the three girls who were orphaned at birth and raised by the Academy of the Unseen Arts, meaning Agatha and Dorcas aren't her minions so much as her family. As members of the same coven, she and Sabrina know each other — and Prudence is not pleased by the prospect of Sabrina attending the Academy at all.

"[Sabrina] is half-mortal," Gabrielle explains, "and witches look down on mortals because of the discrimination that mortals have put against them over the years." Sabrina's father, a radical former High Priest who tried to change a lot of witch traditions, has also tainted Prudence's opinion of Sabrina.

Despite the bleach blonde locks, Prudence is no Draco Malfoy, who puts such high value on pure blood that it functions as a form of discrimination in the Harry Potter series. Prudence's distrust of non-magical people on Chilling Adventures of Sabrina flips that around and asks us to consider how a history of persecution by mortals might affect the views of modern witches.

As a complex feminist show, Prudence and Sabrina are adversaries not because they're both vying for popularity or affection, but because they have fundamental disagreements on important issues.

"What I really appreciate about the show is the social issues that it challenges," Gabrielle says. "It's very women-driven, [with] this idea that, you know, women do have power. You can take that power and use it. As well as the idea of like the personal journey of discovering who you are [...] challenging belief and you know, like asking yourself what do you believe in, and how far will you go for what you believe in?"

Prudence's conflict with Sabrina is rational as well as ideological. They aren't fighting over a person or a position, it's their values that are in conflict. "[Sabrina's] mortality directly goes against what Prudence believes and the way that Prudence lives her life," Gabrielle says. "She represents something that has deeply affected [Prudence]."

But ultimately, CAOS shows that even two diametrically opposed rivals can come to an understanding. "As time goes on, I think Prudence comes to kind of respect Sabrina's conviction, and her drive, and the fact that Sabrina won't really back down from anything. When she believes in something and when she has an idea, she goes hard for it, and I think that that's something that Prudence really had to respect, and kind of be like, 'OK, like, this kid's got grit!'"

Prudence may seem like the villain at first, but she's far from the primary antagonist on the series. Even though they don't like each other and have different approaches towards boys, magic, and the Dark Lord, they still support each other in their own ways. So what if they curse each other once or twice? They're witches!