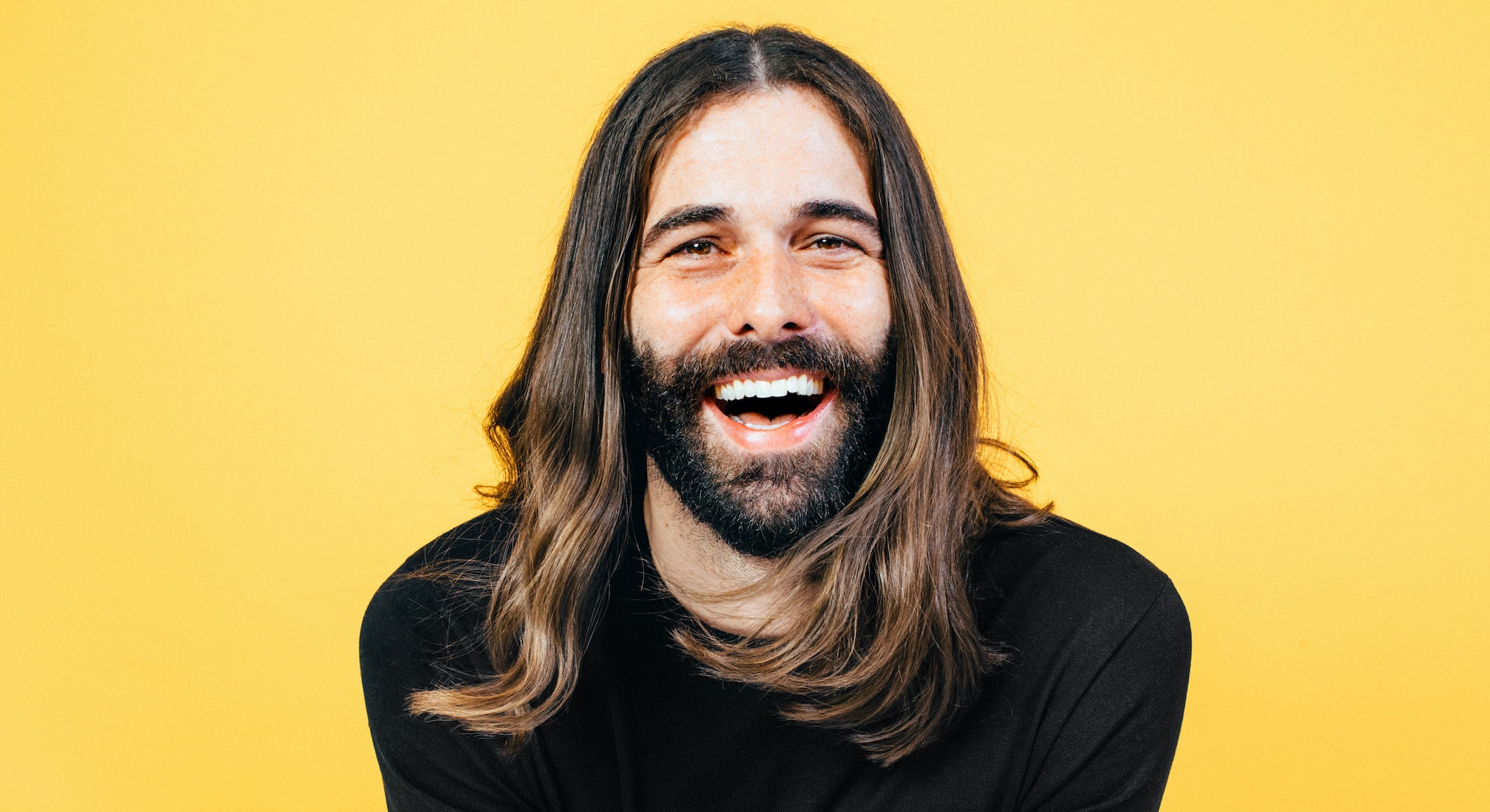 "Have you ever heard of that Japanese water study," Jonathan Van Ness, Los Angeles stylist and one of the stars of Netflix's Queer Eye reboot asks me, "Where they took all of those different water samples and looked at them under the microscope, and they would say, 'I love you' and 'I hate you' [to the samples]?"

Van Ness was referring to the work of Dr. Masaru Emoto, a Japanese scientist who believed that water could physically respond to the energy around it and change its physical structure in response. It might seem like a random question for a 20 minute interview about beauty and self-image (pegged to a reality show, no less), but Van Ness isn't your average conversationalist. In the short time he was in the Bustle offices, he walked me through what really happened to Anastasia and Alexei Romanov in Yekaterinburg (the man knows his Russian history), asked me to watch his entire Instagram story in support of gun control (to make sure his message was clear for his followers in the wake of the Parkland shooting), and dished on some theories about Taylor Swift (I won't get into the details, but let's just say we are in agreement).

Van Ness' habit of speaking energetically and at-length about something that excites him isn't part of a character he created to play the universally beloved Queer Eye groomer, or the host of Funny Or Die's Gay Of Thrones. Rapid-fire, highly entertaining exchanges seem to be fundamental to his biological makeup. Needless to say, I wasn't exactly surprised that he asked about Emoto's work — but I was intrigued.

"Basically when they said, 'I hate you,' to the water, the water crystals or the crystalline structure of the water turned really asymmetrical and ugly. But then when they said, 'I love you,' it turned into these really symmetrical balanced snowflakes and made it really pretty. And I think it was like thousands of samples of water that they did it on, too, and it was from all over and it was very consistent. So like, when people will be like, 'Oh, my hair is so fine and so thin, I hate it,'" he says, "I'm like, 'Don't talk to your hair like that.'"

Emoto's water studies are just one part of what Van Ness uses to inform and improve his own relationship with self-confidence — and what he keeps in mind to help other people find theirs. Despite expressed embarrassment that he was about to quote a televangelist (for the "second time in an interiew"), Van Ness recalled his mother making him listen to one of Joyce Meyer's audio recordings, Root Of Rejection.

"The self-loathing, the negative self-talk thing, I call that being below the line. I struggle with that, everyone struggles with that — if you say you don't, you're lying. You just can't trust that feeling that you suck. What [Meyer] talks about is that you can't trust about your feelings all the time," Van Ness explains. "Now her reason for not trusting her feelings is very different from mine. She had some Jesus-type forgiveness."

The part of Meyer's talk that Van Ness related to, though, was the idea of not always trusting the worst feelings about himself.

"I was like, if I trusted all my feelings, I would literally be in my mom's basement with a bag of powdered doughnuts on this side, a family size thing of the brown sugar cinnamon Pop-Tarts on this side, with the toaster on the coffee table, and I would eat one pack untoasted and one pack toasted, like I would alternate, then shove handfuls of mini powdered doughnut gems in my mouth, while watching old Olympic free skates and women's team all-around gymnastics."

It's the perfectly balanced combination of earnestness, vulnerability, and chatty humor that makes Van Ness impossible to overlook on Queer Eye, the reality makeover show that relies on the premise that gay men are experts in fashion, style, design, culture, and cooking. Each episode features the "Fab Five" — Bobby Berk, Antoni Porowski, Tan France, Karamo Brown, and Van Ness — descending on the Georgia home of an unsuspecting, rumpled oaf who, for lack of a better phrase, needs to get his shit together.

The team works with each episode's subject for a week; teaching him to cook, dress, style, and groom. Throughout the process, the Five talk to their subjects (many of them straight, white, conservative men) about political and social issues like toxic masculinity, racism, and homophobia, breaking down stereotypes and fostering better understanding along the way. Yes, it's a reality show, but it also feels like important television for 2018, a time the world seems ready to appreciate the value self-love and acceptance over physical appearance.

On the show, Van Ness teaches his subjects about things like skin care, shaving, and which products work best for busy guys who don't have time for a "beauty" routine. While other makeover shows have relied cheap jokes and harsh criticism of the subject's "before" appearance, Van Ness treats his subjects with care, concern, and most importantly, kindness.

"In those old reality shows, they would let them go shop or whatever and then they would crash and be like, 'this is all wrong, don't get those clothes," Van Ness explains. It's like, fuck you, I want my leggings. Queer Eye is stepping out of those boxes. If you want to have body hair, I'm not telling you to wax your body hair. But if you do say that you want to be hairless, then like, alright, let's unpack it, let's exfoliate it first and make sure we have some nice assuaging body care products so we don't get ingrown weird zits and stuff, if you want to be hairless. But I'm also like, 'Why do you want to be hairless?' I kind of want people to get to where they want to get, I just want to help them get there in the healthiest, best way possible."

One of Van Ness' goals for Queer Eye is to show that men taking the time to cater to themselves doesn't make them vain, selfish, or effeminate. His message is a commentary on not only self-care, but also on masculinity and gender.

"I think that in our culture, it's very much taught that women are supposed to be pretty, and look in the mirror and do the little like, you know, walk out the door, the click-clack of their heels, carrying them through the day or whatever. But for men, if you are into self-care, if you're into grooming, you're like a 'diva' or you're 'primping.' So I really wanted to break that down, because there's a difference between self-care and vanity. I mean if your beauty routine means that you need four-and-a-half hours to get it together before you can leave the house, maybe we could have a talk about balance. But there's no issue with you being interested in flossing, or water picks, or SPF, or the best hair balm for you, or whatever."

Without viewing the show, it's easy to assume that it rests firmly on the gimmick of five fabulous, cosmopolitan gay men educating unsophisticated bros on how to be as chic and worldly as they are. The reality of the show is much different. Van Ness seems truly invested in the show's subjects and their transformation — both internal and external. According to him, it's because they are doing the work of building self-confidence that he's already done himself.

"I mean, what don't I relate to?" Van Ness says. "I think that people always say my confidence is really, you know high or whatever. But like, look, I just made you look at my Insta story about gun violence to make sure [it was clear]. You know, I think we all struggle with confidence, like every day. And some days your relationship with the reflection in the mirror is better than others, and I think that has to do with what's going on in our lives. For me, if there's a lot going on and my emotional plate is full, those will be days where I'm like, I hate my face. Also, what I am I wearing? I should really cut my hair. I think I look like an idiot. And then, you know, you get your coffee, you have your breakfast, and then you're like, No, it's okay, I look cute. It's cute. So I think that it's also just like practicing confidence, you know, and being able to fake it until you make it and then at some point you do believe it, because I do love myself but I think that there's days that are easier than others to say that."

Van Ness is building his growing personal brand around self-improvement and unwavering positivity. On Queer Eye, he shares what he's learned with men who've let those things fade into the background. Like Emoto's water droplets, Van Ness understands that self-worth is regularly put under a microscope. Drop by drop we crystalize — and how we take shape is up to us.