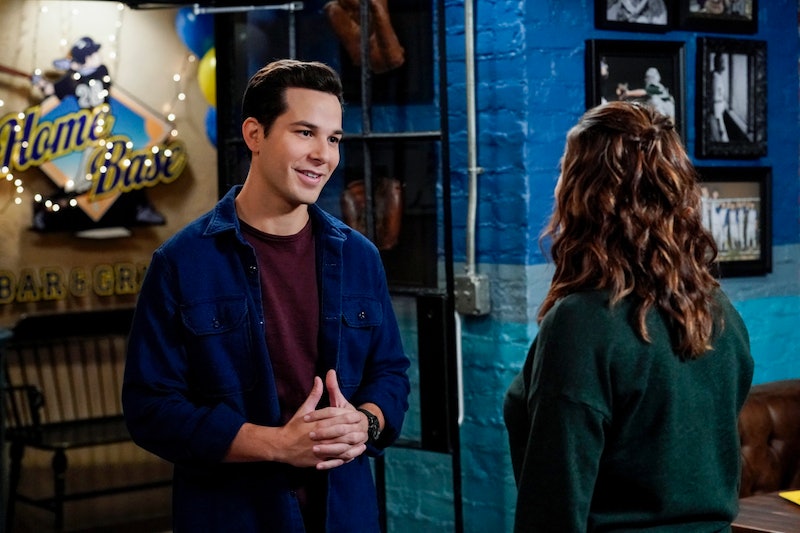 Spoilers ahead for Crazy Ex-Girlfriend Season 4, Episode 10. It's no secret that Greg and Rebecca ended badly on Crazy Ex-Girlfriend, which is now in its final season. After breaking up, Serrano skipped town for Atlanta, where he got sober, started business school, had a serious relationship, and generally became a more mature human being. Rebecca, too, grew in leaps in bounds — that is, after her and Josh Chan's ill-conceived race to the altar. Since then, she's attended therapy, gone to prison (briefly!), stood up to her domineering mother, come to terms with herself, and owned up to past mistakes. They've both become better versions of themselves, which is why Greg and Rebecca may end up together on Crazy Ex-Girlfriend, according to star Skylar Astin.

After Santino Fontana left the show, the Pitch Perfect actor stepped in as Greg. Astin tells Bustle that he didn't study Fontana's performance beforehand, because he didn't want it to feel mimicked or forced. "Since there was space and time and even evolution in the character, I was able to bring an energy that feels a little bit newer to the human being that left the show," he says, speaking over the phone. "What I appreciate about Greg 2.0 is that I was able to just follow the writers' lead. They kind of took care of everything for me. And he's written in such a way that I knew if I just paid attention to the nuances of the writing that I'd be able to somewhat match what people understand Greg to be."

Astin's version of Greg was first introduced in Season 4, Episode 8, in which Rebecca called him, "a completely different person" — the show's way of winking at the audience about the casting change. After a bumpy and occasionally awkward start, the couple is finally able to begin anew in Episode 10, when they both confess that they still have feelings for each other. "I think that they have a very deep connection," Astin says. "[W]hat's going to be the deciding factor is whether or not they could put their history aside — or rather use their history to try to strengthen their connection, rather than make it fall apart."

That Greg has been in recovery for alcoholism for the last two years is an important element, according to the actor. "It really influences decisions," Astin says, citing the scene in Season 4, Episode 8, when his character responds gracefully when Rebecca admits to sleeping with his dad. "He has to immediately go from reeling anxiety to slight forgiveness to confusion to putting a lid on it," Astin explains. "[F]ormerly, Greg would punch a wall and say, 'I never wanna see you again,' and assassinate her character, but he puts a lid on it in this instance and says, 'I'm sure that was hard for you to tell me. That was actually kind of brave.'"

Greg's alcoholism is a sensitive subject, to be sure, but it's one that Crazy Ex-Girlfriend handles deftly — just like Rebecca's mental health. "I think that this show, while making people laugh, has done a lot for people and sheds light on certain issues...that a lot of network comedies don't do because it's just not what their show's about," Astin says. "But in the same episode, they can make a beautiful statement about mental health or being in recovery for alcoholism, and then also do a crazy Cats parody."

And since Rebecca has been working equally hard on herself, attending therapy and making reparations for her actions, her storyline in many ways mimics Greg's. "I think that when Rebecca is in treatment and really, really paying attention to her mental health, she's the best version of herself," Astin explains, "which means that she might be more open to a potential Greg-Rebecca relationship."

But just because they're both in better places now, does that mean that they should pick up where they left off? The results could be either wonderful or catastrophic, but Astin is optimistic about their future. "I think they're good for each other because...there's depth," he says. "[T]hey could really actually be more suited for each other than anyone else. However, if it gets messy, and they can't get out of their own way and revert to old habits, I think that they could actually be disastrous for each other, which we've seen in past seasons."

So when Greg tells Rebecca he still loves her and she reciprocates, it signifies a very real possibility that they'll end up together. And since Valencia and Heather already think that Greg is their friend's meant-to-be, the odds are even more in his favor. Astin may not know how Crazy Ex will end, but he's rooting for the two of them nonetheless. "[I]t's going to be interesting to see how the new versions of themselves find compatibility and if they can truly get over their past," he says. "I think that it could go either way, and I think that that's true to a lot of relationships with heartbreaking history."

Whether or not Rebecca and Greg are, in fact, each other's "meant-to-be," hopefully both parties will continue to become the best versions of themselves — because that should be the real endgame, after all.