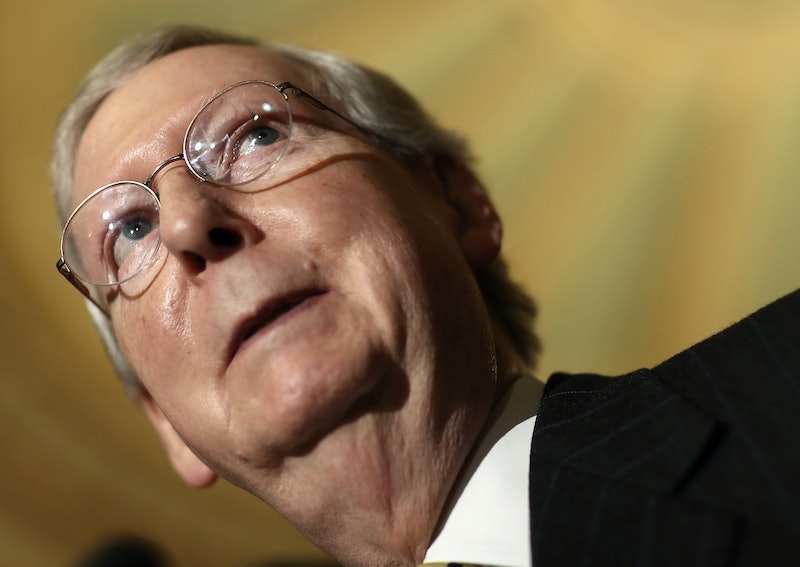 On Wednesday, Michigan Rep. Justin Amash became one of the first Republican officials to suggest that Donald Trump's recent actions — as described in former FBI Director James Comey's memo — would merit impeachment if they were true. Amash was also one of two Republicans, alongside North Carolina Rep. Walter Jones, who co-sponsored Democrats' legislation calling for the creation of an independent commission to continue Comey's investigation into the Trump campaign's ties to Russia. It is unlikely that a Republican-led Congress will impeach Trump, but if it does, it will only happen if Republicans lead the impeachment charge.

Despite comparisons to Richard Nixon's actions and impeachment, Trump has an advantage: Unlike Nixon, Trump does not have a majority party calling for impeachment proceedings. When Andrew Jackson, Nixon, and Bill Clinton faced impeachment, it was because the opposing party — Republicans in Jackson's and Clinton's cases and Democrats in Nixon's — had the majority in both houses. But Trump faces a Republican majority in both houses of Congress, and it seems that no scandal has given them enough cause to abandon their sense of party loyalty.

However, if Republicans take the lead on impeachment proceedings, then it is not a completely impossible prospect.

For now, as Vox reported, it appears that congressional Republicans are waiting for more concrete information before making any decisions. The prospect of Trump's impeachment is not a promising one: After the series of scandals and revelations that filled his campaign — and now his presidency — why should we believe that Trump reportedly telling Comey to shut down an investigation of former National Security Adviser Michael Flynn will be the last straw?

Islamophobic and racist remarks, allegations of sexual assault, and even firing Comey did not seem to cross the line in the eyes of Congressional Republicans, but Comey's memo could still be a game-changer if — and only if — Republicans care more about their country than about keeping Trump in power.

Ideally, more Republicans will follow Amash's example, and they will begin to see the merits of Democrats' calls for impeachment. Amash has not been the only Republican to bring up Trump's impeachment, either; while he was certainly one of the first, Florida Rep. Carlos Curbelo spoke out even before he did, pointing out on Tuesday night that "obstruction of justice — in the case of Nixon, in the case of Clinton in the late 90s — has been considered an impeachable offense."

Equally important to remember is that crowd mentality is a powerful thing; Republicans want to keep their party united, and impeachment proceedings could hinder efforts to pass health care and tax-related legislation that would have a significant impact on midterm elections. Right now, many Republicans are reluctant to even consider Comey's memo as proof of anything.

So, what would have to happen for Trump to be impeached? First, as NPR reported, Comey's memo needs to be published in its entirety, so there can be no doubt as to its contents. Then, Comey would need to testify, as the Senate Intelligence Committee has just invited him to do. Even then, his testimonial would have little effect unless he could make it undeniably clear to a large group of Republicans that Trump has obstructed justice in some way. The reality of the situation is that unless Trump voluntarily steps down himself, Paul Ryan and Mitch McConnell must agree that he must be removed from office, and the Republican majority must pursue impeachment charges.

While it's a rather bleak outlook at the moment, Amash's statement is a good start. If he and Jones are willing to break with the White House on the subject of the Russia investigation and join the Democrats calling for impeachment, then it is not impossible that other Republicans will, too.

More like this
10 Times Diana & Meghan Spoke Similarly On The Royal Family
By Sophie McEvoy
How The City Healed Five Years On From The Manchester Arena Attack
By Ella Glover
Michigan’s Governor Is “Going To Fight Like Hell” To Protect Abortion Access
By Andrea Zelinski
Long Live Bennifer!
By Allie Jones
Get Even More From Bustle — Sign Up For The Newsletter