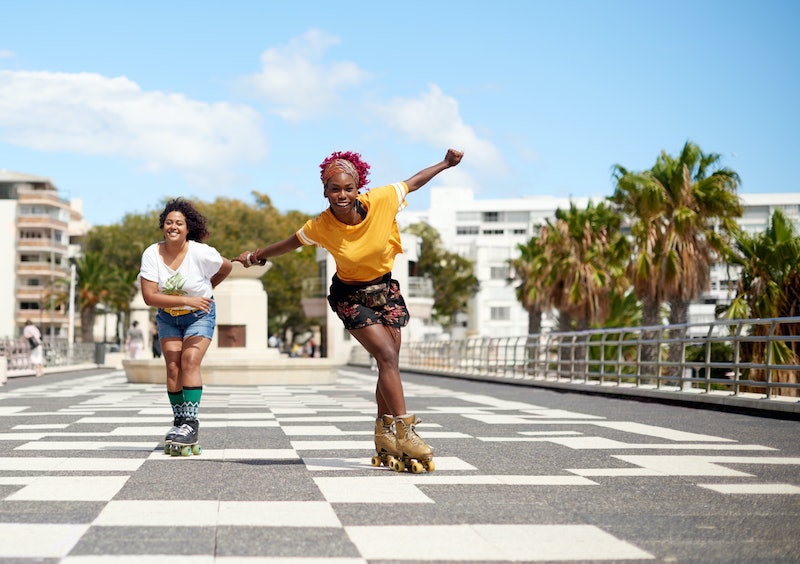 When I tossed my roller skates in the tag sale pile over a decade ago, I was sure that would be the last I saw of them. It was hard to believe that the archaic disco shoes that introduced me to my first arm cast would ever become cool again. Recently, though, an ex posted a video of himself rollerskating down an empty street to the tune of a retro banger. With people quarantined at their parents' houses, they must be looting the garage for entertaining relics, I thought. But then I realized I was being fed roller babe after roller babe on my For You page. My ex's video wasn't a fluke — roller skating is officially trendy again, thanks to TikTok.

Videos with roller skating hashtags like #rollerskating or #moxieskates have attracted the eyes of over 500 million viewers on TikTok. And some of the top pavement princesses are getting millions of views on a single video. According to Google Trends, since the start of quarantine, "roller skates" have been searched more than ever, reaching their peak popularity in May. And it's not a contemporary version of yesteryear's roller skates that people are looking for: Amazon's most popular roller skates look like they've been sitting in the lost and found of a roller derby rink since the '70s. So which came first: boundless time for nostalgic sports, or the TikTok trend?

"Don't hate, roller skate." That's Ana Coto's bio on TikTok. Coto is a 29-year-old Cuban-American actor and dancer based in Los Angeles, CA. She's the reigning queen of roller skating content on TikTok, but she's been mesmerizing people with her skate skills far before TikTok was even a thing. Though the resurgence of the sport in the mainstream might be new, Coto notes that roller skating has a rich, storied history in many communities. "My Cuban grandmother skated in the '50s in Havana. My parents skated when they were younger," she tells Bustle.

Coto says the sport is "bliss inspiring," for her, and she's glad that other people are catching on (again). She says that the skate community is happy to see new disco queens out there because the sport needs help right now. "Rinks (especially in low-income neighborhoods) were at risk of closing before the COVID crisis," Coto explains. "I hope this trend means renewed interest in skate culture and more dollars spent supporting local rinks. Rinks are often safe spaces for the LGBTQIA and BIPOC communities and everyone in between," she tells Bustle.

But not all of TikTok's skaters are roller rink veterans. In fact, many of TikTok's most popular eight-wheelers are as new to the sport as you are to the awareness of its comeback. Though it's hard to believe, based on her effortless gliding ability over bumpy sidewalks and uneven streets, Marician Dedeaux Brown, 23, tells Bustle she's only been skating for three months. "I am not where I aspire to be but I am still continuously learning and looking at the senior members of the skate community for inspiration and advice." Um, what? Brown attributes it to her attitude. "My skills have improved due to my enthusiasm to get on skates even when I am tired. Practice is key and without it, you won't be where you want to be." During quarantine, Brown has turned to skating for stress relief but plans to stick with it post-pandemic.

Though skating is often a community sport, as seen via hashtags like #skatersunite, the community is now mostly online, thanks to social distancing restrictions. "Many people crave the magic, stress-free vibes that they see with people who are rollerskating. It is inspiring knowing that everyone has the ability to feel that," Kelsey Griffen, 25, tells Bustle. “Skating has changed my whole life. I’m so thankful for every single second I’ve spent on skates," she says. "It is very rewarding to be able to see my progress and think about all of the heart and soul and time I put in and now I get to share my own personal groove with everyone," she says. As for why the trend is so popular right now, Griffen says it's just the perfect time for it. "I think people are so interested in learning to skate right now because they see how many different skating styles there are within the skate community and are eager to find their own. Also the extra time we have been given is probably another reason that so many want to try it out."

But if you're watching these videos and having trouble imagining yourself grooving with such effortless funk as the babes on TikTok, Griffen says to adjust your attitude. "Anyone can learn how to skate. I couldn’t even stand on skates. I can not even believe how far I’ve come. It takes time and work, but it is so beyond worth it.”