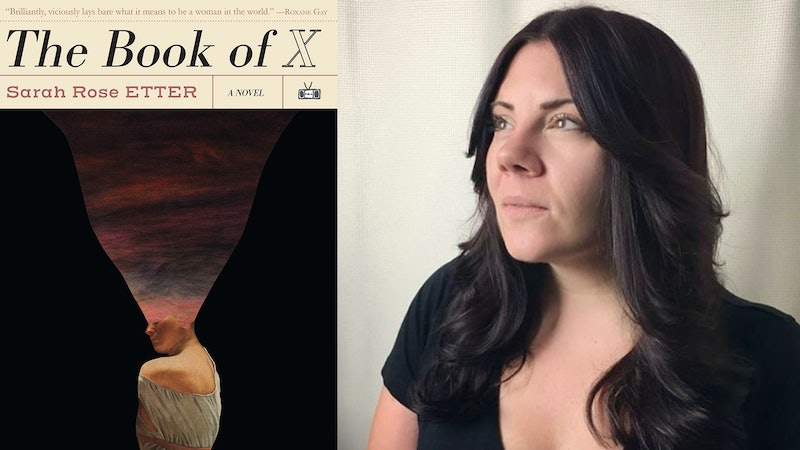 I first read the work of Sarah Rose Etter in a bar in Baltimore, huddled with a friend and a beer and a basket of fries dusted with Old Bay. "You have to read 'Tongue Party,'" my friend told me. It had bodies, blood, sex, but also the intellectual implications of what those things signify, of the consequences when they go awry. It was also funny, and exuberant, and frank — all qualities I came to discover in the author herself.

Because life loves parallels, I recently met Etter at a bar in San Francisco, where we discussed her new novel over wine and fried chicken. My small daughter sat next to her, mesmerized. Etter does everything with flair —writing, gestures, conversation, leopard print, hugs — and as always, it is surprising to be in the presence of a woman this unapologetically bold. As Roxane Gay wrote in a Goodreads review of the book, "Etter brilliantly, viciously lays bare what it means to be a woman in the world."

Reading The Book of X, I encountered images of “freakishness” that reminded me of Diane Arbus, the photographer who specialized in portraits of those who intentionally define themselves through their bodies: nudists, tattoo artists, sideshow performers, strippers. In Etter’s writing, like Arbus’s photos, there is a sense of standing apart, a frankness about otherness. There is body horror, but defiance, too.

"I’d argue in some ways," says Etter. "Having a body at all is grotesque. There are so many ways in which we can suffer because of our bodies, and I certainly think that was a core part of writing this book. And for women, once we factor in the bleeding, pregnancy, miscarriage — all of these are somewhat grotesque by their nature, aren’t they? If we consider the grotesque to be empathetic, disgusting, and magical, then I’d argue yes."

'The Book Of X' by Sarah Rose Etter

I think about this. I fought myself before ordering fried chicken, thinking — as always —about my body. I think about my pregnancy, and childbirth. My body, like the bodies of so many women, is tied to the timeline of my life. And though my experience is that of a cis woman, I imagine how much that also applies to trans men and women and to nonbinary people — the body as a measure, a snapshot in time. The body is the way in which we join the world, the way in which we ask or defy the world to see us. I love that The Book of X touches on this so directly through the character of Cassie, and I tell Etter so.

"For Cassie’s story, it was important to me that she remain an empathetic character," she says. "Despite the surrealism of her physical condition, she still has to face the regular world."

In The Book of X, Cassie is raised near a meat quarry (you read that right) and deals with an unusual, disfiguring condition: Her abdomen is twisted into a painful, protruding knot in the shape of an "x." In spite of the grotesquery of the subject, the book itself is as much a coming of age story as it is anything else. Cassie, raised to be a housewife, suffers through first love and first betrayal and through her mother’s own disappointments, before eventually leaving home to live on her own, getting an ordinary office job, and dealing with the day-to-day of work life and friend life and love life and yes, the violence of life, too. The ordinary gives her routine; the grotesque gives it the final twist. As Etter writes of Cassie’s routine in The Book of X:

Each morning, I yank the stray hairs from my face, brush my teeth, do my makeup...then I put in my false heart, which sits in front of my regular heart in my chest. The false heart is made of thin red plastic and covers my real heart…

"The routine is important,” says Etter. We have ordered second glasses of wine — red, of course, warm and sanguine as blood — and we dig into the routine in the world of the grotesque. "She has to get a job, she has to try on clothes, she struggles with her weight, sex, her boss, miscarriage, coming-of-age. Those elements are part of what make her empathetic. It evolved into a grotesque because if it weren’t a grotesque, it would just be a horror show about the female body."

My daughter has made friends with a half-blind dog under the bar, and is teasing him with chicken. Etter gently dissuades her, and explains that the dog might feel sad. She's good at explaining these kinds of things; she’s persuasive but not forceful. She turns to me and explains, patiently, that she didn’t know the book was a grotesque until Her Body and Other Parties author Carmen Maria Machado, herself a writer of the grotesque, mentioned it in her blurb for the book.

"Some early definitions of the grotesque viewed the term as literally bringing the dark into the light."

"I began researching the history of the grotesque and where it came from," she says. "The surreal, strange cave paintings found in a grotto in Italy; how it evolved to include elaborate fantastical creatures woven into architecture; how it’s the inspiration for the modern-day caricature drawing; how it became a core part of American art and photography; how in literature the grotesque focuses on the distortion of the human body. And I realized that was exactly what I had written. Some early definitions of the grotesque viewed the term as literally bringing the dark into the light."

This is the Sarah Rose Etter, a former art columnist for The Philadelphia Weekly, who is also a go-to for what’s good in the art world. We saw the Louise Bourgeois spiders at the San Francisco Museum of Modern Art at her urging, and my daughter told me and my husband they were "mama spiders and baby spiders." We laughed, only to learn that was exactly what Bourgeois intended. The spiders are her and her mother. What could be more grotesque — and more delightful — than that?

"In retrospect, yes. I certainly consider the book a grotesque," says Etter. "But when I set out to write it, I only cared about one thing: Portraying the experiences of women in a way that blew the door open for a deeper understanding of the female body. I do think the book walks that very empathetic line that makes it a grotesque."

Since we’re talking about the body, I have to ask the third rail question: Does Etter consider her writing feminist? And this new book about the body, about the blood and guts of pregnancy and miscarriages, is it feminist, too?

Etter dives in, fast and unapologetic. "The word 'feminist' is such a challenge. Half of me is yelling: Of course this is a feminist book by nature because it’s exposing what women face every single day! If desiring equality is feminist, then yes, I am a feminist. But while I was writing the book, I never sat down and said, "Time to write a feminist text!" I was only trying to write about one woman’s life. There are experiences I’ve had or witnessed in real life that crept into this book. But it never felt radical or even feminist to write those scenes. It only felt true."

Etter loves Machado, Roxane Gay, Amelia Gray, Leonora Carrington, Maggie Nelson, Anne Carson, bell hooks, Alice Walker, Margaret Atwood, Sylvia Plath, all writers who, she points out, write about womanhood. She says, "It raises a question I don’t necessarily have an answer to, but one I keep asking myself: If the works are dealing with the female body and power and the personal and the political and the female concerns of the now, how can they not be feminist? And what stops us from calling them that?"

"Her condition enables her to view the world through another lens, to see the beauty and humanity in day-to-day life. She almost has a sixth sense of the heart and of the poetic."

More writers are are now turning that feminist power narrative on its head. I think of another favorite writer, Kate Zambreno, who once posted on Twitter, “Maybe I don’t want to be hot and fuckable. Maybe I want to be scary and grotesque.” Writers like Zambreno, like Machado, and now Etter have built a kind of powerful coven through this embrace of the darker side of things.

The moon is high now, and the blind dog has gone. Etter has to get up at an ungodly hour in the morning for work, she says. Before she goes, I ask if she aligns with those writers, and if she sees Cassie’s struggles with her stomach as giving her a strange power?

Etter drains the last of her wine and considers.

"In the book, Cassie’s struggles give her an understanding of life that is otherworldly," she says. "Her condition enables her to view the world through another lens, to see the beauty and humanity in day-to-day life. She almost has a sixth sense of the heart and of the poetic. There is a tragic power in being other for her — in being outside of the mainstream, in looking into the world from outside of the glass. There is beauty in the grotesque in that way."

"I hope that’s what resonates the most with readers," says Etter. "I hope in the end, she transcends."