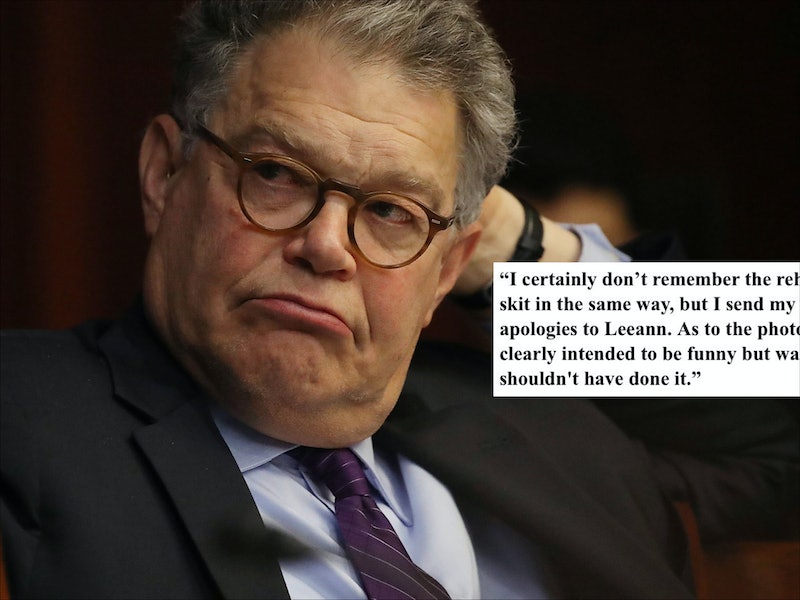 In a poorly thought out statement Thursday morning, Sen. Al Franken responded to the now-viral photo of the comedian-turned-politician pretending to assault a sleeping woman: "It was clearly intended to be funny," he said. Sen. Franken, who is also accused by anchor Leeann Tweeden of trying to kiss her without consent in 2006, added sulkily: "But [it] wasn't. I shouldn't have done it." Franken's adult equivalent of "I'm sorry you were offended" only compounds the issue: In 2006, Franken was not aware that pretending to sexually assault a sleeping woman is not funny. In 2017, Franken still doesn't understand this. Update: Franken released a second statement later Thursday.

In an article published on KABC Thursday morning, radio host Tweeden claims that Franken repeatedly tried to kiss her without her permission as part of a skit while they were entertaining U.S. troops overseas. "I felt disgusted and violated," Tweeden wrote. Later, she says, she came across a photograph showing Franken pretending to grope her breasts as she slept. "I felt violated all over again. Embarrassed. Belittled. Humiliated," she wrote.

Someday, I thought to myself, I would tell my story. That day is now. Senator Franken, you wrote the script. But there’s nothing funny about sexual assault.

Tweeden shouldn't have to tell anybody, let alone a former comedian, let alone a sitting U.S. senator, that "jokes" about sexual assault have no place in comedy. Yet, Franken's childlike response — it was supposed to be funny! — implicitly places the blame on Tweeden.

This is a kneejerk response to any "joke" about sexual assault that tanks: But it was meant to be funny! You just didn't get it!

Tweeden outlines two separate instances in which Franken apparently thought joking about sexual assault was a-OK: The first time, when he penned a skit in which "his character comes at me for a 'kiss,'" Tweeden wrote. ("I certainly don't remember the rehearsal for the skit in the same way," Franken said in his statement.) The second time, when a grinning Franken appeared to grope Tweeden as she slept, according to the photo she shared.

This is not the first time Franken has been accused of not taking sexual assault against women seriously. As BuzzFeed reported Thursday, Franken once made a "rape joke" in the SNL writer's room — "I give the pills to Lesley Stahl. Then when Leslie is passed out, I take her to the closet and rape her," he said. Franken, for his part, wrote in a book published in 2017 that he "wasn't sorry" for the joke.

Once again, the familiar refrain: But it was meant to be funny! You just didn't get it!

And in 2000, Franken wrote an article for Playboy called "Porn-O-Rama!," in which he wrote about a fictional sex institute and the fictional robot-on-human sex he engaged in there. It contains words and phrases that six female GOP politicians derided as "beyond vulgar" in an open letter protesting the piece. For example:

As Dr. DeVine led me to the Future wing of the institute, I couldn't help but notice that she is an extremely attractive blonde with a tight, round ass, legs that won't quit and firm but ample breasts ... She allowed her bodacious breasts to brush against my face as she lowered me into the prototype of the Virtu-Screw 2000. "How does that feel?" she cooed. I didn't know if she was referring to the Naugahyde bucket seat or to the two erect nipples pushing through her white lab coat and nearly poking my eyes out.

This column shows flagrant disregard for women, and an extreme objectification of women as sex objects for your pleasure.

It is no excuse that Al Franken used to be a professional comic. If anything, his background in comedy should have made him well aware that "joking" about sexually taking advantage of women — a situation that every woman lives in fear of — only normalizes rape and other kinds of sexual assault. When "rape jokes" are considered funny, rape itself, by extension, will not be taken as seriously.

It's unacceptable that Franken behaved this way 11 years ago. It's every bit as unacceptable — and, frankly, unbelievable, given the evidence that sexual assault is prevalent in every industry and has affected every woman — that he chose to defend his behavior, as he has before, with that worn-out refrain.

But it was funny. You just didn't get it.

More like this
At 14, Tatiana Maslany Was Obsessing Over Tamagotchis & The Spice Girls
By Gabrielle Bondi
Beyoncé & Madonna’s “Break My Soul” Remix Honors A Group Of Black Icons
By Stephanie Topacio Long
Britney Spears & Sam Asghari Called Out Kevin Federline’s Claims About Her Kids
By Grace Wehniainen
Christina Aguilera Took A Powerful Stand At Brighton Pride
By Sam Ramsden
Get Even More From Bustle — Sign Up For The Newsletter