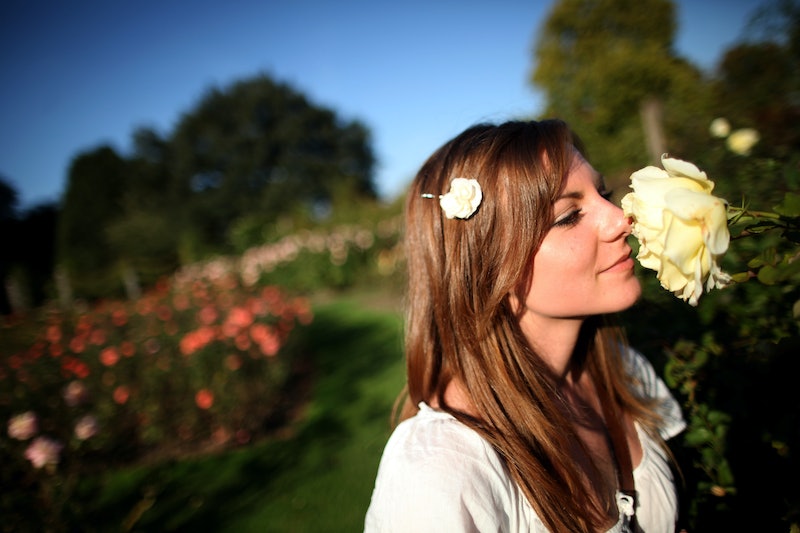 Getting a whiff of a certain scent, like holiday cookies baking in the oven, can instantly transport you back to your childhood — a time when life was likely much easier. Ever wonder why certain scents make you feel nostalgic? There's actually a scientific reason for it. A new study published in the journal Cerebral Cortex found that your brain actually plays a pivotal role in the relationship between odors and nostalgia by logging scents in the part of your brain responsible for making long-term memories.

This is why certain scents can whisk you away to another point in time, and make you wish you were actually there, or make you want to flee, depending on if the smell has a positive or negative association. Take for instance the much loved pumpkin spice latte. The findings of the study might provide some insight into why everyone loves it so much. "From an emotional standpoint, pumpkin spice evokes the comfort of a cozy kitchen and good things baking in the oven," Eliza Cross, author of the Pumpkin it Up! cookbook, told 10Best. "More than any other flavor, I think pumpkin spice encompasses the sweet comfort of being home."

Personally, a specific cologne an old boyfriend wore can stop me in my tracks if I smell it somewhere else. I instantly look around to see if he's there, even I though I know he's not. And, that smell makes me relive the entire relationship, whether I want to or not. Apparently, I'm not the only one.

The Power Of Nostalgia-Induced Scents

The link between scent and nostalgia is so strong, that it could even prompt you to buy things you don't need because you're feeling all warm and fuzzy. It's true, your impulse buys could be scent induced. "Christmas carols and nostalgic songs, decorations and displays are also common tactics as well as the use of scents, as there was a 'direct link' between the olfactory nerve and the brain, which means we associate some smells with certain feelings and memories," Alexis Carey reported for Australian site News.com.au.

While a certain scent in a store might make you think you absolutely have to have that custom egg stamp, to stamp eggs and give them to people like one does, you might feel differently when you get home and no longer smell that farm-fresh cooking that threw you into a nostalgic vortex. If this has happened to you, and you feel like you've been tricked, you have. And, you can blame it on your brain.

"It’s known as 'odor-evoked autobiographical memory,' or the Proust phenomenon, after French writer Marcel Proust," Dr. Joseph Michael Mercola explained on his blog. "In his famous novel In Search of Lost Time, the narrator dips a madeleine cookie into a cup of tea and is transported back into time as long-forgotten memories of his childhood come flooding back."

Scents Stay With You Forever

One of the reasons certain scents can induce immediate childhood nostalgia, according to Dr. Mercola, is because your memory files odors away in its long-term database, which is why scents most often transport you back to your childhood. Additionally, "Separate research also revealed that both young and old adults were able to recall more than twice as many memories when they were associated with an odor..."

While it's always nice to take the nostalgia train for a little ride, scents can also cause you to relive trauma and experience stress. And, while you may have thought you became a constant worrier because you spent so much time around your worry-wort mother, it's actually more complicated than that. "Intriguingly, a mother’s fears may even be passed on to her children via scent. In one study, female rats were conditioned to fear the smell of peppermint before they were pregnant," Dr. Mercola explained. [...] "The newborn pups learned to fear the smell even when their mothers weren’t there, after just a single exposure."

Basically, fears trigged by smells might be passed on from one generation to the next, which could explain why your entire family hates a particular smell. One the flip side, this is why aromatherapy might not be the new-age mumbo jumbo many people think it is. certain scents can trigger good feeling, making aromatherapy a positive experience for many people.

Fear Of Odors Is A Real Phobia

Maybe certain smells trigger my migraines because I associate them with negative experiences I don't consciously remember. Because I am so sensitive to scents, I always carry a menthol nose stick with me, or a small bottle of peppermint oil, so I can inhale that when a particular scent becomes too much for me.

And, Google, oh how I love thee. It turns out there is a name for this negative odor experience. "Individuals who suffer from Osmophobia — or often referred to as Olfactophobia — express a general fear, aversion, or psychological hypersensitivity to smells and/or odors," the website All About Counseling explained. "This type of phobia is often so intense that a person will do everything in their power to get away from or avoid the aversive smell." This is a perfect description of my aversion to certain scents. Wow, I feel so much less alone now. #TheMoreYouKnow

Because scents are nostalgia inducing, they can also make you remember something as better than it actually was. Basically it makes your brain block out the bad times, and yearn for the good ones. Kind of like what happens to me when I smell that ex-boyfriend's cologne. I forget all of the reasons why the relationship wasn't working, and drown in the sweet memories of everything that was wonderful.

"Human beings tend to emphasize vision over all other senses, but our sense of smell is important enough to evoke its own form of déjà vu," the BBC noted. "Perhaps the foul and strange smells we experience today will be associated with fond memories in years to come."

So, if a certain scent stops you in your tracks, and makes you want to do something reckless, like text an old boyfriend, it's good to know that it's just your brain playing a trick on you by pulling a blanket of nostalgia over your conscious mind. On the other hand, if a whiff of baking cookies makes you want to call your mom, go ahead and do it. It will probably make her day.

More like this
12 Nostalgic ’90s Beauty Products That Bring Back All The Feels
By Tyler Atwood and Paris Giles
On TikTok, Tinned Fish Date Night Is The Latest Viral Food Obsession
By Emma Carey
Why A Libra & Capricorn Couple Will Have A Difficult DTR Conversation
By Kristine Fellizar
Why A Libra & Libra Couple Might Become Codependent
By Kristine Fellizar
Get Even More From Bustle — Sign Up For The Newsletter