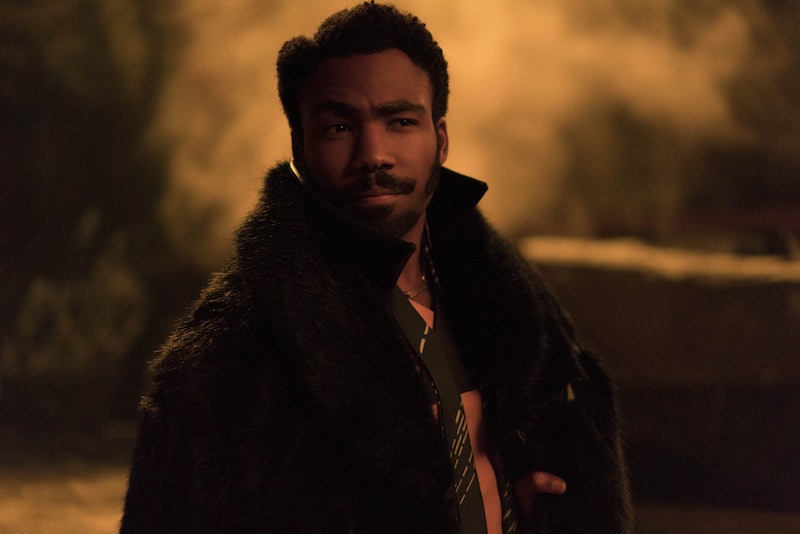 Long before Donald Glover became Hollywood's real-est renaissance man, he was a 7-year-old kid from Georgia with a Lando Calrissian action figure and a penchant for all things Star Wars. And now, almost three decades later, Glover stars as Lando himself in May 25's Solo: A Star Wars Story — and he's more than aware of how huge a deal that is.

“The fact that [Lando] was 'high-end' … like, he was high-brow. You know, Han is kind of the ‘lower-brow' kind of thing. It’s really cool," says Glover when we chat during Solo's recent press day in LA, his legs slung over the arm of a sofa chair. "You don’t really see a lot of black characters like that, where it’s like" — here, Glover briefly assumes Lando's trademark side-eye and smirk — "‘Look at my city. Eat my food. Enjoy yourself. You’re all invited, of course.’ It was really nice.”

Like so many others, Glover grew up watching Billy Dee Williams play Lando in the original Star Wars franchise, and he understands now just how important the character was to him during his formative years. “As a child, it was my first toy and I was really into the movies,” explains Glover. "I think the great thing about it was, I didn’t think it was abnormal. I didn’t look at it as, ‘Oh, somebody looks like me.’ I think that’s what’s good about being young and those things existing. It’s normalized. I was like, ‘Yeah, he’s the star of the movie.’ I never overthought that.”

For young Star Wars fans of color today, seeing Glover as Lando could be just as big a deal, but when asked about that possibility, the actor chuckles. "I just feel like, if it happens to them the way it happened to me, just me being there is enough," he says, adding that due to the scope of representation in pop culture today, young fans might not "need to rely on Lando like that anymore."

Glover himself has contributed much to the film and TV world's "normalization," as he calls it, most notably with Atlanta, his critically-acclaimed comedy that tackles issues like race and class in America. Yet even with that kind of content existing today, there's no question that the character of Lando having such a prominent role in Solo feels very much like a triumph for both the Star Wars franchise and its fanbase. Authenticity and representation matter, especially for young viewers who'll likely make up a large chunk of Solo's audiences.

And Glover does acknowledge how big a deal it is that he landed the part, considering the invariable slew of odds stacked against anyone angling for a leading role in a Disney franchise. The actor recalls how, before he was cast in the film, he told his agent that “If they’re doing a Han Solo movie, I need to play Lando.” The agent responded, “OK. But I don’t like your odds.”

Yet Glover, of course, went on to beat those odds. "It feels good. It feels like hard work pays off, which, I know it doesn’t always," he says now. "Sometimes you work hard and then you just learn a different lesson. But it was way easier for me to do the role after [beating those odds], because I just felt like I was supposed to have it, a little bit."

After watching Glover's charming, charismatic version of Lando take the reins in Solo, it's easy to see why the actor feels that way. When it comes to the role of Lando, maybe Glover truly was always supposed to have it.