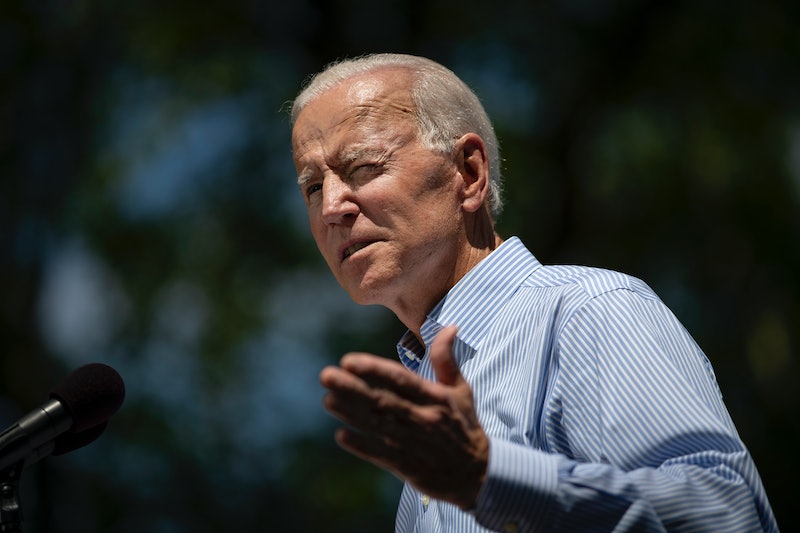 The 1994 Violent Crime Control and Law Enforcement Act seems poised to be a key issue in the 2020 Democratic primary, with former Vice President Joe Biden receiving criticism from both his primary challengers on the left and President Trump. According to Politico, the main reason the 1994 crime bill is controversial is that critics blame the legislation for soaring incarceration rates — particularly among the black community.

Though Biden was criticized on CNN's State of the Union by New York City Mayor Bill de Blasio on Sunday and Sen. Kamala Harris earlier in May, the strongest words came from Trump, who tweeted Monday night that "Super Predator was the term associated with the 1994 Crime Bill that Sleepy Joe Biden was so heavily involved in passing." Trump called it a "dark period in American History" and said that Biden had not apologized for it. Bustle has reached out to the Biden campaign for comment.

So far, when talking about the crime bill Biden has emphasized what he thinks are the better aspects of the bill. "I’m the only guy ever nationally to beat the NRA," the presidential hopeful said before a New Hampshire crowd last Tuesday, according to The Hill. "Because when we did the crime bill — everybody talks about the bad things. Let me tell you about the good thing in the crime bill."

"It’s the one that had the assault weapons ban, a limited number of bullets in a clip," Biden continued, according to The Hill. "It made sure that cop-killer bullets, Teflon bullets, weren’t available any longer. It opened up the whole effort to make sure there is background checks for the first time in American history."

Speaking with Bloomberg, Biden also emphasized the bill's creation of drug courts that allowed for treatment instead of incarceration.

According to a fact sheet from the National Criminal Justice Reference Service (NCJRS), the bill also included gun control measures, as Biden pointed out. The bill included an assault weapons ban, began the background check requirement for gun dealers, and prohibited the sale of guns to people with a domestic violence restraining order on file, according to the NCJRS.

The Center for American Progress calls the bill "one of the cornerstone statutes that accelerated mass incarceration" and criticizes the effects it had not only on the federal criminal justice system, but on local and state laws, which were incentivized by funding to become stricter, too.

"It has been well-documented that these policies were failures," the Center for American Progress report on the bill from 2019 reads. "Their cost to society came not only from the staggering amount of taxpayer dollars that were invested in enforcement, but also from the disproportionate incarceration of a generation of African American men in the name of public safety."

Trump used that argument in his second tweet about the bill. "Anyone associated with the 1994 Crime Bill will not have a chance of being elected," Trump wrote on Twitter Monday night. "In particular, African Americans will not be able to vote for you. I, on the other hand, was responsible for Criminal Justice Reform, which had tremendous support, & helped fix the bad 1994 Bill!"

It's worth noting that Trump's own record on this issue is all over the place, based on legislation he's signed in office and his public statements before entering the White House. He signed the First Step Act criminal justice reform bill in December 2018, which eases mandatory minimum sentences and allows for prisoners to earn early release. But he's also known for advocating for the death penalty for the Central Park Five, a group of black teenagers who were accused of raping and beating a white woman in 1989. They were exonerated 13 years after being convicted.

Though Biden has not apologized for his support for the 1994 crime bill, other Democrats have, including former President Bill Clinton, who signed it into law. "I signed a bill that made the problem worse," Clinton said at the National Association for the Advancement of Colored People's annual meeting in Philadelphia in 2015, according to CNN. "And I want to admit it."

During the 2016 presidential election, then-candidate Hillary Clinton also apologized for supporting the bill while she was first lady, according to USA Today. Biden, at least so far, seems to be taking a different path.