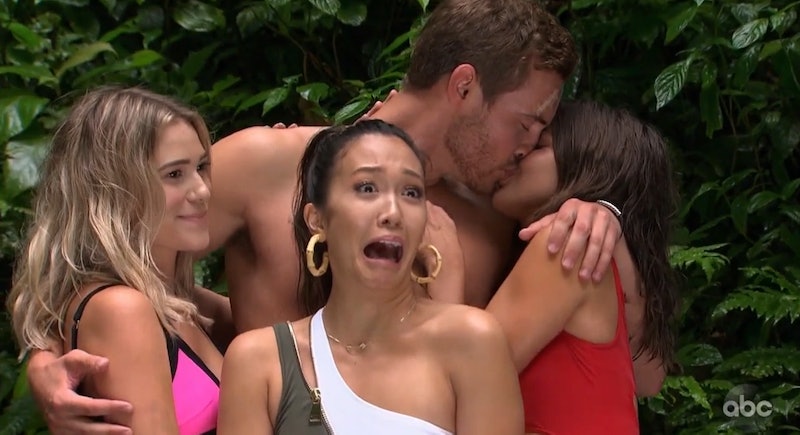 During Monday night's episode, the women of The Bachelor took part in a Cosmopolitan photoshoot for the magazine's March fashion issue. Victoria F. won the challenge, meaning her picture with Peter was meant to be the cover of the issue ... however, it's been revealed that the March cover is actually of Lucy Hale. And in a post published mid-episode, Cosmo's Editor-in-Chief Jessica Pels explained why.

Pels wrote that because Bachelor plot points are "as closely guarded as nuclear codes," she didn't meet any of the contestants until that day in Costa Rica. As a result, "it wasn't until a few weeks ago that I found out that the woman I'd chosen" — Victoria F. — "had, in her past, modeled in an ad campaign wearing White Lives Matter attire."

Reports about Victoria's past modeling campaign first surfaced on social media in early January, when fans of the show shared screenshots from WLM Apparel Clothing's Instagram page on Twitter. (The Instagram account appears to have since been deleted; Victoria has not confirmed or commented on the reports. Bustle reached out for comment but has not received a response.) According to Fox News and Cosmopolitan's letter, the brand in question is an organization that works for marlin conservation and uses "white lives matter" and "blue lives matter" messaging on its shirts to raise awareness for the white and blue marlin that are being overfished. However, Pels continued, "the nature of the organization is neither here nor there," as "both [the] phrases and the belief systems they represent are rooted in racism and therefore problematic."

The phrase "White Lives Matter" is derived from the Black Lives Matter movement, which was created to combat police brutality against black people. White Lives Matter — a racist response — minimizes and dismisses the very real violence people of color have historically faced.

While it's unclear whether or not the company Victoria reportedly modeled for supports WLM or if they were simply using the phrase to gain attention, Pels made it clear that Cosmopolitan wanted no part in it, and thus decided to scrap the cover. "Unequivocally, the White Lives Matter movement does not reflect the values of the Cosmo brand," she wrote. "We stand in solidarity with Black Lives Matter, and any cause that fights to end injustices for people of color."

That being said, the Cosmopolitan shoot with Peter and all of the women on the group date will appear in the magazine. As Pels said, "Ultimately what felt right was ... simply being honest with you, the audience we respect, about what happened and where we stand."

More like this
Kathy Hilton May Not Return To 'RHOBH' — At Least Not Full Time
By Jake Viswanath
The New Bachelor Will Be Announced Next Week & Here Are The Top Contenders
By Grace Wehniainen
Everything To Remember About Lace Morris Before 'Bachelor In Paradise' Season 8
By Grace Wehniainen
Where Is Former Bachelor Host Chris Harrison Now & What Is His Net Worth?
By Hugh McIntyre
Get Even More From Bustle — Sign Up For The Newsletter