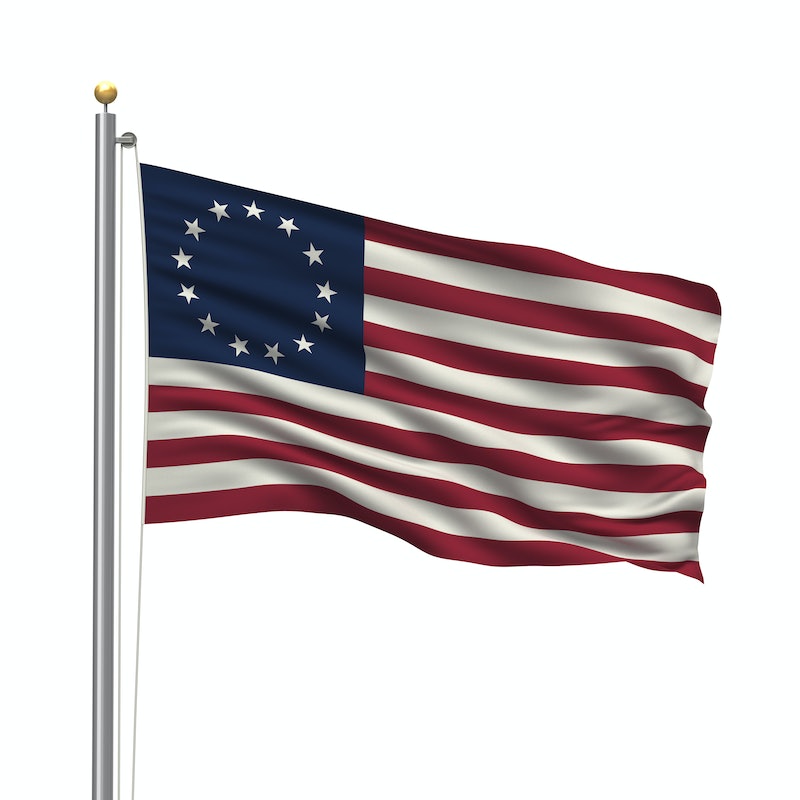 Colin Kaepernick is back in the news, and right-leaning commentators on Twitter are promising to boycott Nike once again. This time, though, the source of this turmoil isn't Kaepernick himself, but rather the Betsy Ross flag, a symbol of America that's as old as the country itself. Now, there's a conversation over whether the Betsy Ross flag is a white nationalist symbol, though experts in right-wing extremism tell Bustle that if there is indeed a connection, it's a very loose one.

The issue arose on Monday, when The Wall Street Journal reported that Nike was canceling sales of a sneaker featuring the Betsy Ross flag in response to private criticism from Kaepernick, whom Nike sponsors.

“Nike has chosen not to release the Air Max 1 Quick Strike Fourth of July as it featured the old version of the American flag,” a spokesperson for Nike told The Wall Street Journal.

Beyond just being an old version, though, the Journal reported that Kaepernick expressed offense at the flag because it came from a time of slavery. Later, The New York Times reported that the flag has also repeatedly turned up in connection with white nationalism. But Mark Pitcavage, a senior research fellow at the Anti-Defamation League's Center on Extremism, says the flag is not listed in the ADL's extensive list of hate symbols.

"Over the past century, some Ku Klux Klan groups — which often have used historical American symbols — have displayed the 'Betsy Ross Flag,'" Pitcavage tells Bustle. "There is one old Klan-related graphic, for example, that depicts a Klansman on a horse while behind him the Confederate flag and the 'Betsy Ross Flag' wave. However, the 'Betsy Ross' flag is not common among white supremacists."

The fact that it has appeared alongside white supremacists at times is hardly unique to this particular flag. As Michael Jensen, PhD, a senior researcher at the University of Maryland's National Consortium for the Study of Terrorism and Responses to Terrorism, tells Bustle, it is common for white nationalist groups to use historical symbols.

"Under the guise of ‘heritage,’ symbols of early U.S. history have long been adopted by hate groups."

"White nationalist groups often adopt symbols from certain historical periods, political groups, and even mythology to represent their ideological and social perspectives," Jensen says. The Confederate flag, he explains, is one particularly clear example of this.

"Under the guise of ‘heritage,’ symbols of early U.S. history have long been adopted by hate groups set on returning to a time when all non-white people were viewed as subhuman and un-American," Keegan Hankes, interim research director the Southern Poverty Law Center, tells Bustle. "Historically, these symbols have been used by white supremacists, both to hearken back to a time when black people were enslaved, while also painting themselves as the inheritors of the ‘true’ American tradition."

The flag, which looks the same as an American flag except for its circle of 13 stars on the blue field that now bears 50 in rows, is a very old one. It was first created in 1777, and credit for the design went to Betsy Ross, a seamstress from Philadelphia — though the Library of Congress notes the story is likely just a legend.

While Pitcavage tells Bustle that ordinary Americans currently display the Betsy Ross flag as an expression of patriotism far more frequently than white nationalists do, Jensen notes that the Nike boycott and the media attention to it could have unintended effects.

"It is a very real possibility that these groups will increasingly adopt the flag as a symbol of white nationalism moving forward," Jensen says.