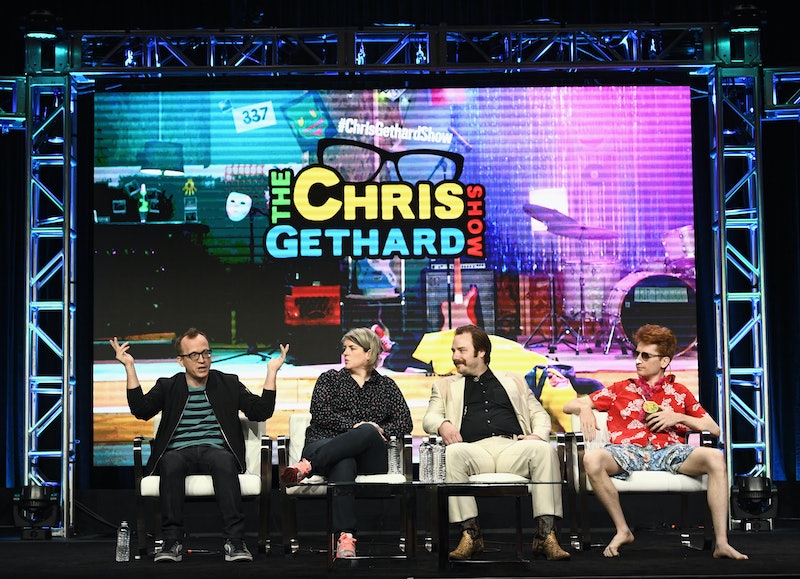 Watching truTV's comedy/talk show hybrid The Chris Gethard Show feels like hanging out with a friend group who don't mind you using their anecdotes and in-jokes... even if you weren't there when it happened. The cast encourages it, actually, because the more the merrier. According to the live show's cast members and host, The Chris Gethard Show happily brings audiences in to its own weird world. It's a show comprised of self-described misfits and comedy nerds — but the niche humor is super inclusive. You don't have to be a comedy buff to hang out with this bunch.

"In a perfect world," Gethard tells Bustle, "the show is funny enough that a person who has never heard of us can stop on the channel and just laugh a few times, and they'll wanna come back."

The live talk show in its current iteration on truTV features callers, guests from the comedy and professional world, a musical guest, a house band, and a panel of hosts and outlandish characters. Each episode has a theme, but there are no monologues that bite into current events, like on other late-night shows. The show's themes are almost indescribable. If you haven't seen "One Man's Trash" you're missing out on one of the most thrilling episodes of television ever made. The entire premise of the episode was that the audience had to guess what was in a dumpster. That's it.

Paul Sheer and Jason Mantzoukas, who were the guests in that episode, return in Thursday, Nov. 30's midseason finale for an episode titled "Screw It. Show Us Your Pets." It's probably going to be exactly what it sounds like, and who could ask for anything more?

"There's this whole mythology now," says Gethard about both the characters and the path the show has taken. The show started as a stage production at the Upright Citizens Brigade in 2009, then moved to Manhattan Neighborhood Network on Public Access in 2011, then did two seasons of half-hour episodes on Fusion between 2015 and 2016, and has landed once again on truTV. Some jokes have persisted and grown over many of those years.

However don't let that history deter you from watching right now. For one thing, you could spend days on Youtube watching old episodes from Fusion and Public Access. That's one way to learn why panelist Murf Meyer is in a feud with a Secret Society in Chapel Hill, North Carolina or what the deal is with character like the Human Fish. Or you could just enjoy the show. It's not Lost. You don't need a manual to join in on the fun.

At the end of the day, the cast and their guests are just friends who really care for each other. "The real life side of [the show] outweighs the bit," says Gethard.

The cast is also conscious of the fact that new audience members might not initially understand the show, and make that part of the experience. "We don't alienate them," says cast member Shannon O'Neill, "we fold them in." That goes for live audience members who become incorporated into the shenanigans via the warm-up comedian Connor Ratliff, as well as first-time callers or internet commentators watching at home. The cast won't make fun of you; they'll include you. It's an immersive experience, to say the least.

What Gethard remembers and wants to maintain from the Public Access days of the show is that sometimes, he and his castmates would have to "sit in shame and failure" when a bit fell through. It's honest, genuine, and makes everyone watching feel like they're in on the experience. "[Gethard] likes things chaotic," says bandleader Hallie Bulleit. "He's very comfortable in chaos."

A great example of that kind of unexpected comedy and community that comes from failure happened a few weeks ago on the show. The idea was that fans would get into a Skype phone booth in Baltimore and pretend to be ghosts. But communication failed and nobody seemed to be playing along.

"I started calling it out," says Gethard, "because I had to. I'm going, 'This is the worse it's ever gone.' Because I had to release the tension, it was going so poorly."

Then, one girl dressed as a ghost entered the booth, and before the cast knew it, everyone was cheering this ghost girl on. "What happened in the aftermath of the failure," says Gethard, "was exponentially funnier than what we thought we were gonna do anyway."

"On stage we're all rooting for each other," says Bethany Hall, also in the cast. "There's no competition. We all just do what we're doing and it's a joy, it's an escape from — it's like a routine escape."

So much entertainment in 2017 has an element of "fear mongoring," Gethard claims. It feels as though we're cynical and angry all the time. Even silly memes often have an underlying sadness to them. What The Christ Gethard Show aims to be is a pressure release. The series does not shy away from talking about fear, failure, mental health, identity, and all manner of serious issues — but it's authentic and hopeful, in the end.

"We all show up as flawed people too," Hall says of the cast. "I feel like it's our responsibility as cast members to be like 'I'm flawed and I'm still having fun.' That's where the cynicism gets thrown aside."

Bulleit compares it to going to a friend's house and shedding off all the "satirical tweets you've tweeted" during the day with music and dancing. "That is the mood that you catch us in when you're watching the show," she says.

"We're not hiding our heads in the sand," says Gethard. "We're not pretending the world isn't a terrifying place right now — but we're trying to deal with that by being empathetic and being a safe haven and being united with anyone who wants to be a part of it, rather than being divisive, or spitting venom or reaching further into echo chambers of people who agree with us."

Even if you alternative comedy isn't your thing, The Chris Gethard Show is a great place to spend an hour a week and just feel OK. Maybe it'll even become your thing. It'll never be too late to join the group.

More like this
'Derry Girls' Creator Teases Exciting Spin-Off Starring These Three Characters
By Olivia-Anne Cleary
Becky G Once Had A Fear Of Speaking Spanish. Now She's Topping The Latin Charts.
By Tess Garcia
Twitter Is In Utter Meltdown After 'Derry Girls’ “Poignant” Finale
By Sam Ramsden
'Obi-Wan Kenobi' Takes Place After This Key Star Wars Movie
By Arya Roshanian
Get Even More From Bustle — Sign Up For The Newsletter