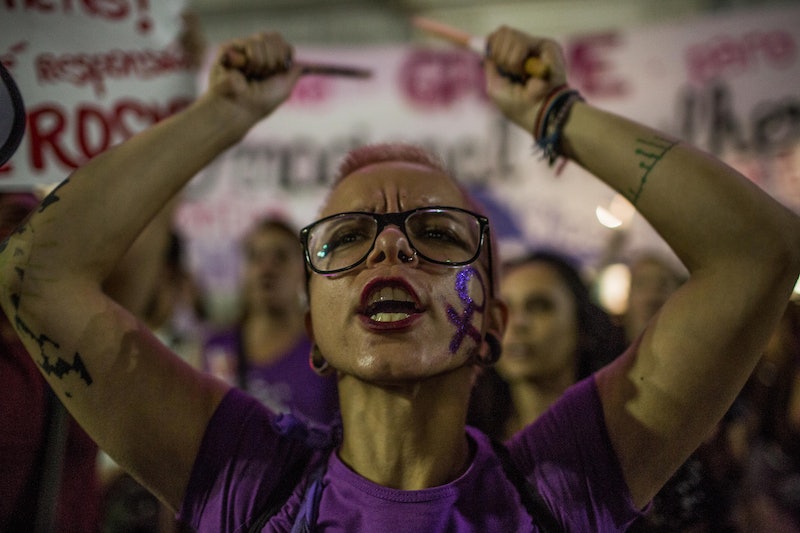 On Tuesday, the Federal Communications Commission (FCC) announced that it plans to roll back Obama-era net neutrality protections, meaning that Americans' equal access to all internet content could be eradicated in the near-future. While this decision could have negative implications for all Americans, the Trump administration's push to end net neutrality will particularly harm women, whose voices and representation stand to be further marginalized without net neutrality.

Net neutrality allows everyone with an internet connection to access the same online content in the same way — that is, people do not pay more to access certain websites. The potential repeal of net neutrality protections (which is expected to occur in December) could mean that Americans will have to pay more to access certain websites and/or that companies will have to pay internet service providers (ISPs) to be one of the websites featured in priority access packages for consumers. Moreover, eliminating net neutrality also means that ISPs could potentially block or slow down websites whose content they do not support.

Ending net neutrality poses a threat to the free and open internet — and has particularly negative implications for women. First, if net neutrality is repealed, women's voices will likely be further marginalized. As Free Press described in a 2014 article, mainstream media has long suppressed women's voices. To carve out their own space in the media, women have launched websites to make their voices heard. If net neutrality is eliminated, access to women-created content that lies outside of the rhetoric of the mainstream media could be much more limited, as independent, women-owned websites will be unlikely to afford to pay ISPs for priority access to their content.

Suppressing women's voices online would also further perpetuate a media narrative dominated by those who own mainstream media outlets — predominately white men. A letter sent to the FCC in 2014 by dozens of media and women's advocacy organizations, further highlighted the myriad ways in which ending net neutrality could threaten women's representation:

Without Net Neutrality, women’s and girls’ voices online will be threatened and silenced. Already, our so-called 'mainstream' media’s structural inequality continually leaves women and girls out ... Especially affected by these structural inequalities are women and girls of color, trans women, queer women, and indigenous women (to name a few), who are regularly attacked and objectified by major media when they’re not completely ignored and erased from our screens and speakers. Having rich white men in charge of media and media policy has only made major media richer, whiter, and full of men — shocker. Now they want to takeover the Internet. What could possibly go wrong?

Feministing, a women's advocacy blog, also warned of these dangers back in 2014. The site described how, if net neutrality was repealed, women's websites like itself could be increasingly unable to exert influence in the mainstream media. In other words, the media could become a tool and voice of those at the top of "social and economic hierarchies." Essentially everyone else's voices will be left out.

Suppression of women's voices is not the only problem women face from a net neutrality repeal. Indeed, women's rights organizations could stand to face outright censorship of their platforms if an internet service provider disagrees with their message. For example, in 2007 (before net neutrality protections were in place), Verizon blocked NARAL Pro-Choice America, an abortion advocacy group, from its group text messaging program, saying that it had a right to ban “controversial or unsavory” text messages. Verizon eventually backtracked on its decision after significant public outcry. However, this example perfectly illustrates the type of censorship of women's messages that could occur if net neutrality protections do not remain in place.

Indeed, NARAL is still very much concerned about the implications of a rollback of net neutrality protections. Earlier on Tuesday, the organization tweeted that "Repealing NetNeutrality is a direct threat to reproductive freedom ... Without it, our access to information about how to obtain an abortion or other reprohealth services could be compromised."

Lastly, ending net neutrality could have detrimental effects on women's economic successes. According to the Benton Foundation, net neutrality is essential for women-owned businesses to compete in the marketplace, as it helps provide a more even playing field online by ensuring that all websites are equally accessible. Putting an end to net neutrality could seriously impact the success of these businesses.

Moreover, since internet service providers may raise prices for access to certain content if net neutrality is repealed, women would surely face further obstacles to accessing the internet — and all the social and economic benefits it provides. Women across all racial and ethnic groups are more likely to live in poverty than men and therefore less likely to be able to afford increased internet costs. This lack of affordability would further perpetuate poverty and hamper social mobility among women.

It is clear that ending net neutrality poses a serious threat to women's representation and to their right to exist as equals in American society. Ending net neutrality is indeed an attack on feminism and something which could severely impact the lives of thousands of American women.