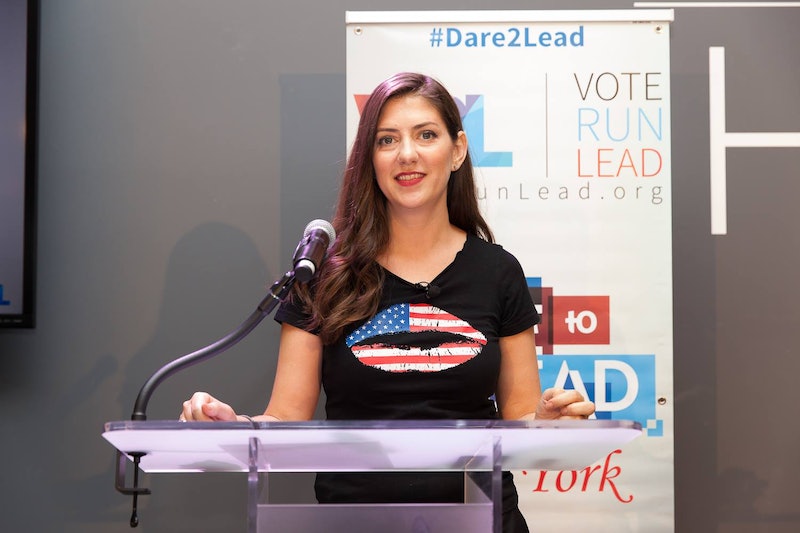 In the months following Donald Trump's presidential victory, there's evidence of an uptick in women interested in running for office. Fortune reported in February that more than 4,000 women signed up to run for public office in the three months following Trump's election, according to data from EMILY's List, a group that promotes pro-choice, Democratic female candidates. Such a surge was "unprecedented" for the group's 32-year history, according to Fortune. NPR reported that overall, "Early signs from the groups that work with women considering a bid for office suggest a level of intense interest not seen in at least a quarter century."

VoteRunLead, a nonpartisan nonprofit that encourages women to run for office, has also seen evidence for the potential to have a new wave of female leadership in government. Two days after the election, VoteRunLead held a webinar called "This Is How You Run For Office" as an educational tool for women interested in getting politically active. While the average expected amount of enrolled members hovered around 40-50, in the 48 hours after Trump's election, 1,103 women had registered for the class, according to its founder, Erin Vilardi.

However, there are still some significant misconceptions about running for office that may be keeping some women from declaring their candidacies, according to Vilardi. One of the most common concerns is about how much it costs to run for office. Or even more specifically, how exactly does fundraising work when you're balancing it with a full-time job?

In an interview with Bustle, Vilardi shares why fundraising fears shouldn't impede women from running.

"One of the things we can totally teach you is fundraising," she says. "One of the first things we do is having someone make a list of their contacts, their social media networks. Start with 50 people’s names and put a number next to their names, maybe $1, $5, $50. After that, we make a quick assessment, and after 10 minutes, you would be surprised how many women can estimate a sure $5,000, $10,000 and beyond, and that’s just counting their contacts or close family and friends."

For those who feeling nervous about the size of their social network or the financial position their friends are in, Vilardi says there are plenty of creative ways to financially bolster a campaign.

"You can throw a house party and charge a fee. It’s great for people who don’t have a ton of money, but want to find a way to raise money and connect," she offers as an example. "Then there’s the party structure. That’s great for people because there are always locally involved people who will donate to a Democratic candidate."

Another component to keep in mind is that, depending on the position you're interested in running for, many of the local positions only require a relatively minimal amount of fundraising in the first place.

"With a lot of mid-to-small city council or school board races, you only need to raise between a couple hundred bucks and $5,000," Vilardi says.

There is the secondary concern of how to balance fundraising with a full-time job. However, it is manageable, says Vilardi. She suggests going door-to-door to speak to future constituents and gather donations after work. In fact, that method may actually be better than doing so during the day, "since most other people work as well," Vilardi notes.

If the idea of balancing a day job and local politics still sounds overwhelming to you, both financially and emotionally, Vilardi shares that there are political appointments that can be applied for like regular jobs.

"If you don’t wanna raise money, you should go after an appointment," she says. "An appointment might be for the Mayor’s Office, the Governor’s office, a community task force, or a zoning commission, where you’re submitting your resume to the Mayor’s office or the Governor’s office. Just like the president, we see them just fill positions in government. You can be a leader without going through the election process and raising money."

Most importantly, Vilardi wants women to realize that they don't have to transform themselves — financially or otherwise — to become active in government. "You don’t have to rebrand yourself," she says. "The skills you have are what we need in government."

More like this
These Shoes Are So Comfortable & Stylish, You'll Wear The Crap Out Of Them
By Alexa Hempel
The 77 Cheapest, Most Clever Gifts On Amazon
By Rebecca Martinson
The Best Oils For Eyebrow Growth
By Marissa DeSantis
You Definitely Know The Voice Of Shuri's AI In 'Black Panther: Wakanda Forever'
By Brad Witter
Get Even More From Bustle — Sign Up For The Newsletter