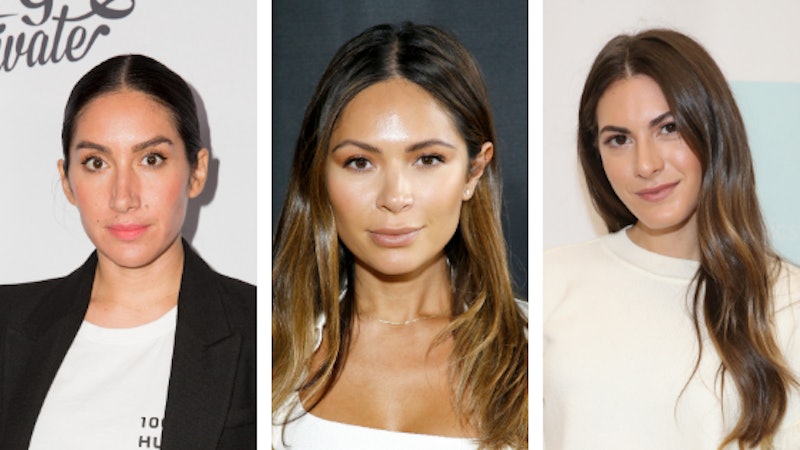 With the global cosmetics market valued at $532.4 billion in 2017 and estimated to grow to $805.61 billion by 2023, there's no question that emerging brands can feel like small fish in a big pond. But celebrity hairstylist Jen Atkin and skin care experts Marianna Hewitt and Lauren Gores Ireland are three women founders who have recently found major success in this highly saturated field. Their brands — Ouai, founded by Atkin in 2016, and Summer Fridays, launched by Hewitt and Gores Ireland in early 2018 — gained popularity quickly, becoming favorites among beauty insiders.

Before their respective product lines joined the market, each of these women were influencers in the beauty space. This experience arguably helped them to understand, first-hand, the power that Instagram can hold when it comes to driving businesses today, guiding them to create social-first brands. Just four years after its launch, Ouai boasts over 810,000 followers on Instagram, while Summer Fridays has already gained an IG audience of over 155,000 users to date. But Atkin, Hewitt, and Gores Ireland all believe that this power can be accelerated, ten-fold, when women in this space are able to support each other and work together.

Case in point: the Ouai x Summer Fridays travel set, which launched in December 2018 and included the Summer Fridays' Jet Lag mask, Ouai's Treatment Masque — two products that fans of each brand already knew and loved — and a very Instagrammable terry cloth hair band. Soon after the collaboration was released, it sold out in just a few weeks at Sephora, and has yet to be restocked online.

Long before the launch of the travel set, or even their own individual lines, Atkin reveals that the three have always stuck together. “In one of the first tutorial videos I did for Ouai for Sephora, we were lucky enough to get Marianna to be in the video with me as my model,” she tells Bustle. She also adds that she's been a supporter of Summer Fridays since day one, and gushes about just how much she loves the Jet Lag mask. "It rehydrates my skin to another level," the hair stylist says. "I apply it on planes and on days where I need to look alive. It removes any puffiness and gives me the hydration I need.”

The love, as it turns out, is mutual. Hewitt says she's long been a fan of Ouai's Treatment Masque, the Air-Dry Foam, and the Rose Hair & Body Oil, which she swears by to get Pinterest-perfect beach waves. And Gores Ireland even used to go to Atkin for hair cuts back in the day — making last year's collaboration a full-circle moment. “It's been really exciting to see our journeys cross again in a whole new way," she muses. "[Marianna and I] watched Jen build a brand out of her personal experience, so she's been a huge mentor to us from the beginning.”

On the topic of mentorship, Atkin advises women looking to break into the industry to find an online-savvy mentor they can trust: someone who they'll be unafraid to talk to when things are good and bad. But outside of just seeking professional guidance, the 39-year-old also stresses the importance of women fostering community — not competition — amongst each other. “We live in a time where women are changing the conversations in business," she says. “I truly believe there is enough work for all of us to go around."

Gores Ireland agrees, saying that no one woman can make it on their own in the male-dominated beauty industry. “I think the old idea that competition yields more success no longer applies — especially because we are all so connected online today," she explains. "There is room for all of us."

But when these women speak of making space for others, they're not only referring to people at the top — they want to include and support those at every level. “We get a lot of images from our followers that we repost,” Atkin shares. “I think the beauty industry has the opportunity to connect directly to their audience now, especially through integrated content or collaborations with celebrities, bloggers, and digital platforms." Influencers, models, as well as hair and makeup artists like @tamiastyles, @honeyblondegigi, and @angelalvarado, have all had their work grace Ouai's grid. The same can be said for Summer Fridays, which has featured @mianne.chan, @viki.ortner, @jaimecharmed, and many more. And though simply reposting a photo may seem like a small feat to some, this minuscule act can expose people to thousands of Instagram users — potentially adding fuel to their careers.

Unsurprisingly, these forward-thinking women also have the same mindset when it comes to sharing similar beauty lines on their company's feeds. “As influencers, we talk about and share so many brands,” Hewitt explains. "Promoting a single-brand lifestyle just wouldn’t be realistic." Instead, she embraces the idea that her consumers could have multiple favorites of the same product category, all for different reasons.

“We genuinely love other brands, and want to share and show how you can incorporate our products into your existing routines,” Hewitt continues. “When Jen says collaboration over competition, she really means it. It isn’t just a quote for Instagram. She has encouraged us so much along the way, and we want to be able to do the same for other female entrepreneurs.”