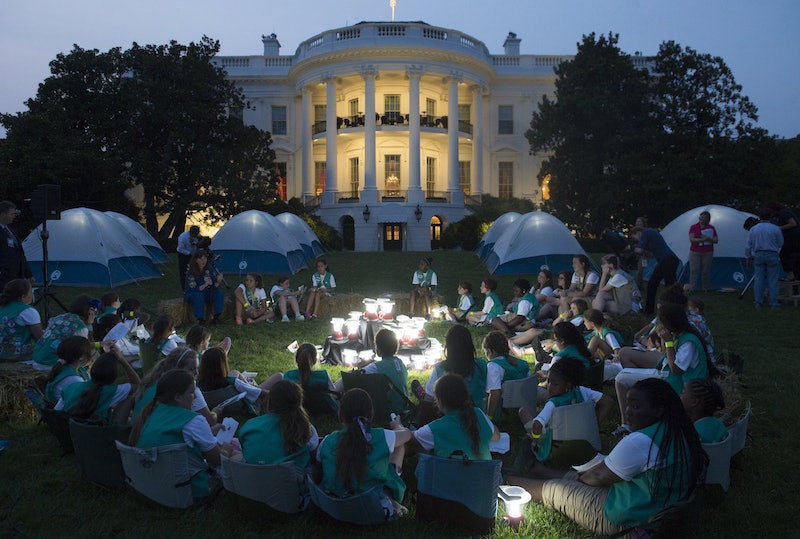 After more than a year of tumultuous presidential campaigns, is 2017 the year everything goes back to normal? As they have every other year since 1917, the Girl Scouts will march in the inaugural parade when Donald Trump is inaugurated as the 45th president of the United States. The Girl Scouts of America Twitter account defended the decision, saying that attending the event will help scouts "learn about the U.S. democratic process & civic engagement." The Girl Scouts participated in President Obama's 2013 inauguration, after all, so in theory this year is just like any other.

Only it isn't. At all. In no other year since the Girl Scouts' inauguration tradition began has the incoming president literally bragged about sexual assault, been caught on camera doing so, and been elected anyway. Girl Scouts of America did not respond to Bustle's request for comment.

The Girl Scouts' mission is, as their website states, to build "girls of courage, confidence, and character, who make the world a better place." Young women who watch this inauguration and are told that the president-elect is just like any other will internalize Trump's ugly message.

As the Girl Scouts Twitter account has also clarified, members can decide for themselves whether to attend the inauguration. This is definitely important — compulsory participation would be far worse — but the Scouts' defense that their organization is "nonpolitical [and] nonpartisan" is not a sufficient justification for their willingness to participate in the parade.

Even if they have no other stated political beliefs, the Girl Scouts ought to be pro-woman and in favor of the empowerment of girls. Reacting to the Trump inauguration as if it is any other sends the message that this inauguration is like any other, even though Trump seems to fundamentally believe that women are worth less than men.

Donald Trump believes that wives shouldn't work, and has said so publicly. He sent a New York Times columnist hate mail telling her that she had the "face of a dog!" Trump told New York that "you have to treat [women] like sh*t."

Most notably, he was also caught on tape telling a 10-year-old girl — the age of many Girl Scouts — that he would "be dating her in 10 years." These are all examples of how the 2017 inauguration will not be "like every other year."

Generally, it makes sense that the Girl Scouts seek to be a nonpolitical organization. Women's empowerment and sisterhood should be bipartisan goals, and in most years it would make sense for the Girl Scouts to participate in an inauguration. But if GSA doesn't demonstrate to its scouts that this year is not like every other, the organization risks normalizing Donald Trump's very abnormal and concerning behavior.