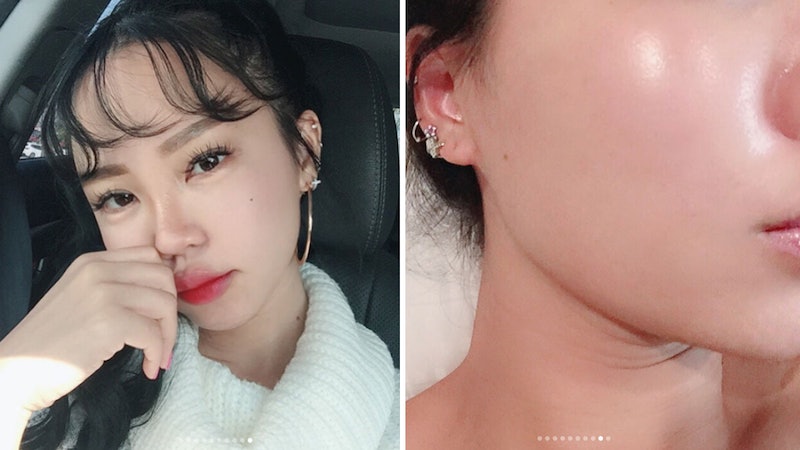 I recall a recent instance where my friend noticed and asked me why my foundation shade was lighter than my natural skin tone. I wasn't sure how to answer. I knew that this friend, a non-Asian male who was completely unfamiliar with the cultural and beauty standards that Asian-American women subconsciously feel compelled to live up to, meant no harm when asking this question, but it incidentally provoked a lot thought and feelings from me nonetheless.

There was no simple way to explain. What was I supposed to say? "Actually I chose a lighter foundation shade because my insecurities stem from my personal experiences in colorism, a form of discrimination in which people are treated differently due to the social meanings attached to their skin color"?

For so long, I had believed the lie that a lighter complexion was more worthy and signified greater beauty for most of my adolescence. As someone who grew up as a darker-skinned Asian girl, I knew I did not fall into that category.

This is a depressing but unsurprising reality for me as an Asian American. For centuries, skin tone preferences have been linked to and used to identify social class across Asia. Darker skin was associated with being in a lower class, because it usually meant that they spent more time outside working, while those of higher class had lighter skin. By contrast, in modern Western culture, having a tan is perceived as trendy, healthy, and sporty. Americans spend millions of dollars on tanning products. According to Gizmodo, approximately 30 million people in the United States use a tanning device each year. America's standards for having tan skin and Asia's standards of desiring light skin made me feel conflicted — it was something many people in the U.S. strived for but something that gave me shame at home, in my Asian American suburb of Diamond Bar, California.

When I would visit Asia or see my Asian relatives, my darker skin was the first thing that anybody would ever point out whenever they saw me. I remember very clearly, on a family vacation to Hong Kong, a stranger saw my mom and me and stopped us. “Hi little girl, are you Native American?” he asked me, smiling. His voice was condescending. “Why is your mom so pale and why are you so dark?”

He asked my mom in Cantonese, unaware that I speak the language fluently, if I was adopted and that he couldn’t fathom how different we looked. I remember running to the bathroom and sobbing in a stall because I did not want anybody to know and also because I couldn’t hold the tears in. I was only seven years old and the memory is still clear as day to me now.

Western beauty ideals aren't only displayed as questionable comments from strangers — they exist disguised as "trends" as well. The recent K-beauty trend “Glass skin,” or having poreless snow-white skin just like glass, has been a beauty ideal in Asia for ages, but has recently become a popular topic of conversation due to a viral Instagram thread by Ellie Choi, an aspiring makeup artist.

In this thread, Choi reveals the specific skin care routine she undergoes to achieve and maintain her "flawless" fair skin. Her post garnered over 10,000 likes on Instagram in the span of less than a week and, at the time of publication, has over 35,000. While it is true that Choi has beautiful skin, her routine is specific to her skin type, stated as combination, so the routine may not guarantee the same result for others. More concerning, however, is the fact that Choi was obviously born with fair, near porcelain skin, something that cannot be changed by using the products she suggests. The trend of promoting "glass skin" is problematic, but the name "glass skin" was coined by other people on the internet to describe this skin, while Choi herself called it "clear skin."

Despite this fact, this thread, which features the products she uses and tips for using them, has been reposted over and over by other accounts, blowing up Instagram's Explore page as well as major lifestyle and beauty websites all over the internet. Since then, beauty websites have published articles to help readers achieve this smooth, snow-white look that Koreans idolize.

While these articles appeal to those who want this look, there have not been any voices speaking out about how promoting "glass skin" is problematic to Asian Americans and people who do not naturally meet Western beauty standards.

Whenever some of my friends suggest to go to the beach to go tanning, I think about the times I go back to Taiwan to visit my grandparents, and how they would encourage me to stay the shade I currently am so I don’t get too “dark.” I have realized that, as an Asian American, I will never be completely homogenous to the beauty standards of both of the worlds that I am from.

Over the years, my skin has lightened naturally, possibly due to the fact that I hate playing sports and prefer indoor activities. However, there are still parts of my body that are darker than others, and I still tan extremely easily, especially in the summer.

Sometimes it still bothers me, but most of the time, I try my best to take it with a grain of salt. I think of my younger self, the one who thought that drinking milk or bathing in lemons to make her lighter would make herself feel less worthless and more beautiful. I think of the one who cried in the bathroom stall all by herself. I don't want any other young girl to hate herself because she is bombarded with these standards of beauty that she can’t live up to.

It also helps to have role models who have had the same experiences as me. I was extremely happy to read Constance Wu’s recent interview with Allure, where she shared her personal experience of being pushed lightening products by saleswomen while she was filming Crazy Rich Asians in Singapore. She said that she would reject them because she was proud of her natural skin and working-class roots.

“I’m not a white translucent tulip. I’m the granddaughter of Chinese bamboo farmers, the daughter of immigrants, the sister of an ultramarathoner (who runs for hours...in the sun!), and an American. I like my freckles and my natural skin color. It’s who I am,” she told Allure.

Perhaps it is through Asian American influencers such as Constance Wu who bring exposure to both cultures, that we will slowly be able to change the narrative on what it looks like to be “beautiful.” Being beautiful and being light-skinned are not mutually exclusive, and we can all work towards shattering this belief by viewing and treating every person of every hue equally and calling out other people who promote colorism.

It’s too late to go back and change where these beauty ideals began, but it’s not too late to change the way we view them and respond to them. The solution is not only limited to practicing self-acceptance and love, but also with diverse representation in media and acceptance within our own community.‌

More like this
Kim Kardashian On The Beauty Hack That “Changed My Life, My Skin, My Confidence”
By Taylor Jean Stephan
Jelly Nails Are Officially Trendy Again
By Kali Borovic and Audrey Noble
The "Washed Denim" Trend Is A Modern Way To Wear Blue Eyeshadow
By Olivia Rose Ferreiro
This Week’s New Makeup Releases & More Beauty Headlines
By Audrey Noble
Get Even More From Bustle — Sign Up For The Newsletter