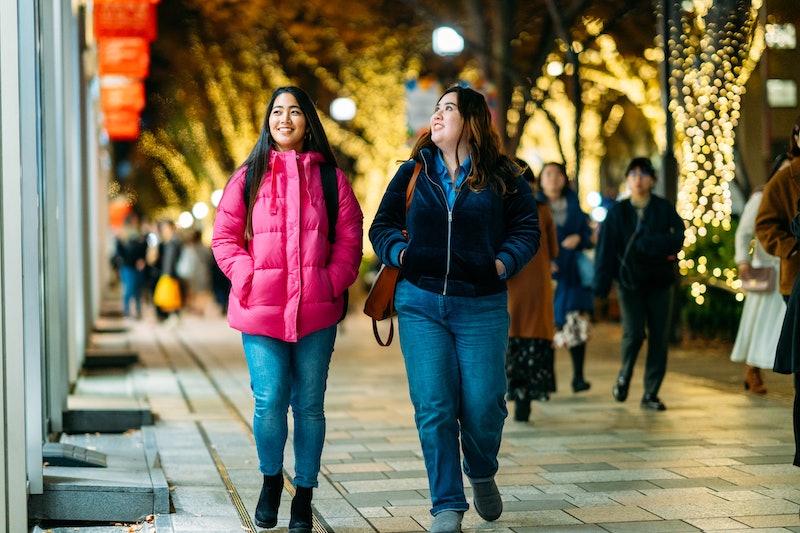 It's the holiday season, and the time between Thanksgiving and Christmas appears to be flying by like a Roadrunner cartoon. One minute you're eating pumpkin pie, and the next it's the New Year. Yes, this particular December is going by super fast thanks to the late arrival of Thanksgiving in the U.S., shortening the holiday shopping season, but there's also a documented psychological phenomenon that makes this season feel like it's whizzing by. The reason the holiday season feels so short has to do with our perception of time, the built-up emotional anticipation before a break, and the psychological pressure to have a "magical" holiday season.

"The holidays feel short because, in large part, they are," clinical psychologist Dr. Joshua Klapow, Ph.D. tells Bustle. Holidays at the end of the year, for example, only cover a few days to a week depending on your religious beliefs, he tells Bustle. This isn't the same everywhere; in Australia, where I'm from, the period around Christmas and New Year coincides with several months of summer holidays — but the entire season still seem to go by in about two days. Regardless of where you are, the holiday season seems to speed up the days. According to psychologists, that's down to human perception of time, and something called the "holiday paradox."

The holiday paradox applies to any period of time off, including vacations, bank holidays, Thanksgiving — even that long weekend with your best friend hiking the Rockies. The term was coined by psychologist Claudia Hammond, and refers to a mismatch between two concepts of time. Before the holidays and during them, we look at holiday events from what's called a prospective vantage; afterwards, we look at them from a retrospective vantage. And those two viewpoints differ a lot in their perception of time.

Prospective vantages, Scientific American noted of Hammond's research in 2016, tend to go very quickly, particularly if we're doing lots of new and interesting things that differ from our day-to-day routine. Dr. Klapow tells Bustle that many people often cram a huge amount of activity into their holiday season, condensing social activities that might take weeks or months (seeing every member of your family, for example) into a much shorter time period. That crush of experiences can make the days fly by. Afterwards, though, when we look back on the holidays from a retrospective vantage, we can see all our newly formed memories and experiences from a distance, and the whole seems to have lasted a lot longer. Research published in Cognitive Science in 2012 called this shifting perspective "the time machine in our mind"; where we are in time affects how we view the speed of time.

We also experience accelerated time around the holiday season because of psychological pressure around us. Dr. Klapow tells Bustle that retailers deliberately begin to display holiday themes and build up anticipation of the main event months beforehand, to encourage gift-buying. It's known as Christmas creep. "Countdowns can start months in advance," he says. This pressure can make us feel that the holiday period is slipping away rapidly.

Expectations around holiday emotions can also contribute to how short the season feels. "We often have such high expectations of the holidays; they need to be joyous, magical, and fundamentally different than our daily lives," Dr. Klapow says. "When we put this kind of expectation on a few days, those days are going to be fleeting." If you're always rushing to the next fantastic holiday experience, intent on making it The Best Holiday Season Ever, the entire time period will feel as if it's passing at warp speed.

If you feel alarmed at the slipping away of time during the holiday period, don't be — it's a common response to the pressures and busyness of the time period. And you can be sure that, in the long, cold days of February, you can look back and feel as if the days over New Year were endless.

More like this
12 Aphrodisiac Desserts To Spice Up Your Valentine’s Day
By Kaitlyn Wylde
8 Things You Can Do To Appreciate Lunar New Year
By Elizabeth Tsung
8 Charities To Donate To During Black History Month
By Alexis Morillo
How Ovulation Affects Your Sense Of Smell, Libido, & More
By JR Thorpe and Lexi Inks
Get Even More From Bustle — Sign Up For The Newsletter
From hair trends to relationship advice, our daily newsletter has everything you need to sound like a person who’s on TikTok, even if you aren’t.