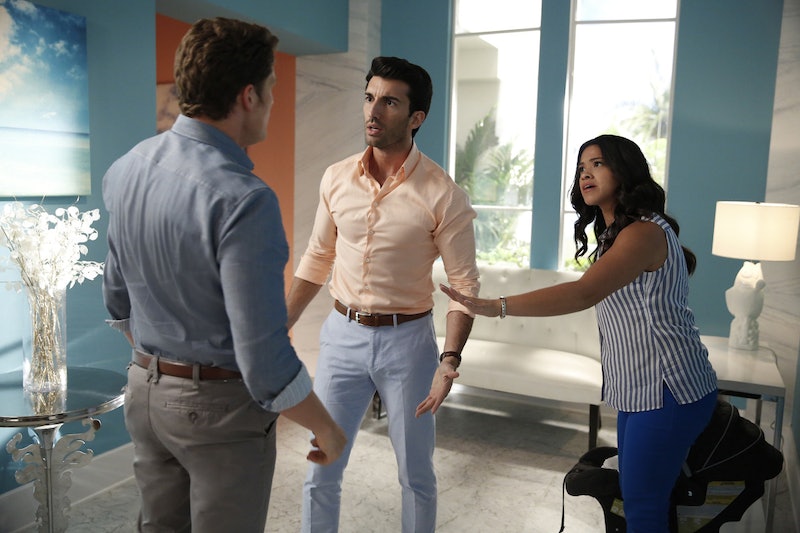 The latest TV series to suffer from Unfortunate Title Syndrome is The CW's telenovela-inspired series Jane the Virgin. When the network first debuted the heartfelt comedy three seasons ago, it was about Jane (Gina Rodriguez), a religious young woman in Miami who was committed to staying a virgin until she was married. She was in a loving, serious relationship with perfect, patient boyfriend Michael (Brett Dier) who totally respected her wishes. But her life was turned upside down when her gynecologist accidentally artificially inseminated her with her boss Rafael's (Justin Baldoni) last remaining sperm sample. Since Rafael was in remission from cancer, that was his last shot at having a child, and so from that one fateful moment, he became enmeshed with Jane, her family and Michael forever.

Being the caring, empathetic soul that she is, Jane decided to have Rafael's baby, and that put Michael in a tough spot. He couldn't wrap his mind around marrying someone who was carrying another man's baby... especially when he found out that Jane was crushing on Rafael. Hard. And thus, a love triangle was born. For much of the first two seasons, Jane flip-flopped back-and-forth between Michael and Rafael as romantic interests. There were romantic kisses, proposals, and even thoughts of losing her virginity before marriage. But in the end, she chose Michael, married Michael, and in the first half of this season, lost her virginity to Michael.

The CW's charming series, returning Monday, January 23 at 9 p.m., had some fun in the first episode after Jane slept with her husband Michael, literally crossing out the words "the Virgin" on the title card. But that major character shift raised deeper questions about whether the show became something new now that original premise was no longer relevant.

"To me it didn't really change the DNA of the show because the show has always been about so much more than Jane's virginity," executive producer Jennie Snyder Urman tells Bustle, raising her voice to be heard over the din of conversation at popular Los Angeles brunch locale Estrella. "I always knew that I didn't want the writers room to get stuck, so we held that off for the fun of it as long as we could. Now it just gives her another avenue to explore in her relationship and those dynamics so it actually opens up a whole realm of stories for us. It's always been the name of the show and something significant about Jane but not the most significant thing about her by any means."

She pauses to laugh and then adds, "It's actually kind of a relief for the writers to finally have her lose her virginity. And for the character too."

Despite the civil war that waged between Jane the Virgin fans over whether she should pick Michael or Rafael, it turns out that the love triangle never truly mattered to the writers because they always knew she would end up marrying and losing her virginity to Michael. In fact, Urman never wavered in her plans to have Jane end up with Michael no matter how tempting it may have been to pair her with Rafael.

"I pitched this show with the end of the show in mind and we had a set season-to-season plan," Urman says. "And things change within that but I always knew it would happen this way."

The question of who Jane will end up with has been answered resolutely, but that doesn't mean the series will slow down creatively in any way. In fact, Urman promises things are only just beginning to heat up.

"We have such big surprises in store and some big changes coming to the world that opens it up in a such an exciting way," she says. "People are going to be shocked at what's coming in the second half of the season."

With no love triangle drama to fall back on, there's no telling where Jane the Virgin is heading, and that uncertainty is where this show shines.