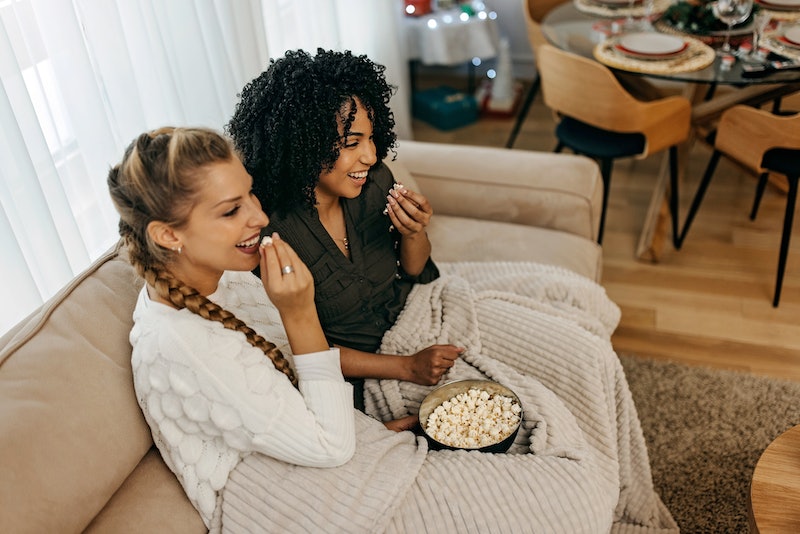 Since at least 2015, talk of the lazy girl fashion and beauty trend has been popping up left and right. Photos of celebrities, bloggers, and social media users going totally makeup-free, rocking the "no makeup makeup" look, or eschewing stilettos in favor of athleisure-able sneaks and joggers have flooded women's lifestyle sites and Instagram alike.

I totally get it: The concept of "wake up and go" is an appealing one for many. I mean, anything to get a little extra sleep, right? But there's a common thread to a lot of the imagery accompanying this easy, breezy aesthetic. Oftentimes, the women celebrated for being so down to Earth and cool are rather thin and rather conventionally attractive, be they lazy girl fashion icons like Cara Delevingne and Sam Rollinson or lazy girl beauty mavens like Gigi Hadid and Kylie Jenner.

As a fat chick, the word lazy sparks some negative memories. The first time I remember being called lazy was in sixth grade health and science class. Our teacher — a very petite Jazzercise enthusiast and a proud yogi — exercised undeniable biases against her fat students. She once told the chubbiest boy around that he was destined to die alone, gesturing crudely to his wobbly belly. When I came into class one day wearing red co-ords in a stretchy, knit fabric, she told 12-year-old me that I appeared "lazy, fat, and uncouth," adding later that "slobs never get the boys or the jobs." I learned quickly thereafter that, when it came to the fats of the world at least, "lazy" is a word often used to question our worth, condemn our appearances, and dish out socially acceptable intolerance.

If you Google "lazy fat people," you'll likely start to see what I mean. Memes questioning whether fatties in wheelchairs truly can't walk or whether they are simply lazy will pop up alongside images of Maria Kang — a mother-of-three whose six-pack abs alongside a "What's Your Excuse?" tag line stirred up controversy in 2013.

Violent Reddit threads flooded with abusive rhetoric against fat people (aka "lazy piece[s] of sh*t") make an appearance, too. So do articles about Katie Hopkins, a British columnist known for her intolerant stance on "the obesity epidemic" who once gained over 40 pounds and proceeded to lose them in an effort to prove that all fat people are, indeed, lazy and useless.

If you Google the "lazy girl trend," however, a different narrative will make itself clear. Here, lazy is not synonymous with ugly, undesirable, a drain on society, slothful, or idle. On the contrary, pictures of beautiful women crowd the page: For the most part, these individuals are white-presenting, thin, incredibly chic, and a perfect picture of Eurocentric beauty standards.

They are the women all women are arguably meant to aspire to. They are the ones who manage to do it all — the jobs, the relationships, the fame, the fortune, the style — and never look like they're actually trying. They are the ones whose sneakers and bare faces reveal nothing except how perfectly they balance conventional femininity with a kind of tomboyish aura. It's a balance that's seemingly meant to make them appear irresistible to the rest of us mere mortals.

As for fat humans, the lazy girl trend doesn't really seem to exist. Google "plus size lazy girl trend" or "plus size lazy girl fashion," and you might come across one or two plus bloggers in leggings, all the while rocking full hair and makeup. Fat positive writers have been highlighting the lack of minimalistic styles or athleisure-wear in plus sizes for several years now. And this will undoubtedly factor into why we don't see more fat babes in sweats. But there's probably more to it than that.

Fat people don't often get the privilege of appearing lazy. Instead, dressing down is regularly met with accusations. Why have we let ourselves go so badly? Why don't we care about our appearances? Why can't we just try harder?

Whenever I stay in with my laptop and a bowl of popcorn, I still hear the voices of everyone who's ever asked me, "Well, shouldn't you be out exercising a little more?" When I don't wear makeup or don't put on a cute dress, I still briefly wonder whether some part of me has become too lethargic. It doesn't matter that I work hard, am self-sufficient, and maintain a good career in journalism. It doesn't matter that I have a lovely partner and lovely friends. Whether I'm feeling healthy or unhealthy (be it physically or psychologically) doesn't matter, either. I know from past experiences that "not putting in effort" with my appearance will still lead to assumptions about my character and lifestyle.

Most of the time, these kinds of assumptions don't bother me. I know that being treated like a human by those around me shouldn't be dependent on how healthy or traditionally pretty or done-up I am. I know that playing into good fatty tropes — Instagramming photos of every salad I eat, gym session I kill, and medical records that somehow prove I cannot help being fat — isn't the route I want to take in combatting sociocultural fatantagonism. And yet, the double standard nags at me nonetheless.

When I started blogging in 2012, the biggest trend amongst my fellow plus size bloggers was to present very femininely. Vintage and retro styles and silhouettes ran rampant, dresses and skirts were the norm, and lipstick was typically pink or red and always perfectly lined. There were some alternative style bloggers out there, of course, who wore blue and black lipstick and reminded the world that the goth look was not one reserved for days of adolescent angst. But the vast majority of us seemed like incarnations of 1950s glamour alongside contemporary girly-girl-dom.

When it came to the world of straight size blogging, there was far more diversity in aesthetics. A fashion blogger could shoot some cute pictures in jeans, an oversized T-shirt, and minimal makeup and be hailed fearlessly stylish. It was rare to see plus size bloggers in jeans and T-shirts, though.

Upon launching my blog, I wasn't really sure what my "personal style" actually was. So I posted ensembles straight from ModCloth: Vintage-y and totally feminine. I also posted "lazy" ensembles featuring jeans and tank tops. While the former were always met with accolade, the latter reacquainted me with the L-word via commenters and social media users alike.

So I stuck to the ModCloth dresses, kitten heels, and MAC's Ruby Woo. I told myself I adored these things above all other styles.

I internalized the notion that through performing femininity I could help prove that my womanhood was just as valid as anyone else's. Fat babes were entitled to fashion and makeup just as much as our thin counterparts. We were just as beautiful, just as stylish, and just as worthy of everything the fashion industry and culture at large had tried to deny us.

Every new dress I put on my body felt like a metaphor for that. And for a long time, it didn't occur to me that I could possibly be contributing to a new kind of beauty standard: One that suggested that plus size women could be accepted, if they did their damnedest to look as feminine and conventionally attractive in every other department beside their weight.

This is not to say that every plus size woman who dresses femininely is doing so for political motives (nor should she have to). It's also not to say that every time a fat, feminine woman gets dressed, she's making it more and more difficult for fat women who prefer a "lazy girl" look to achieve the same kind of tolerance.

But it would be nice to know, beyond a doubt, that fat women could experiment with every trend, every degree of femininity, every degree of masculinity, androgyny, or anything in between, and not risk any kind of condemnation. I want to go to a fashion event in either a floor-length sequin dress or a super stylish tracksuit and be met with praise either way.

I also want to know that it's OK to be lazy sometimes, whether in regards to fashion or chilling in my knickers with a delicious cocktail, a few Netflix Original Series episodes, and my favorite takeout. Whether I choose to stay in or go out, put on a full face of makeup or keep things bare, or wear a vintage dress versus some baggy denim overalls, my weight in correlation to these things should not come with imagined connotations.

If "lazy" has largely transitioned from being an insult to a style statement, then I hope someday the same definitions of it can be applied to folks of all sizes. The "lazy girl trend" shouldn't be exclusionary and dominated by imagery of one particular body type. Instead, we should all be able to delight in the choice to be more hands-off and care-free with our looks — so long as we're the ones making those choices for ourselves.

More like this
I Tried Kendall Jenner's No-Pants Look As A Plus-Size Woman
By Sarah Chiwaya
Megan Fox & Machine Gun Kelly Are A Masterclass In Emo Couple Dressing
By Avery Matera and Allie Fasanella
8 Bennifer Outfits That Stand The Test Of Time
By Avery Matera
Emily Ratajkowski Wore A See-Through Top For Marc Jacobs' Runway Show
By Alyssa Lapid
Get Even More From Bustle — Sign Up For The Newsletter
From hair trends to relationship advice, our daily newsletter has everything you need to sound like a person who’s on TikTok, even if you aren’t.