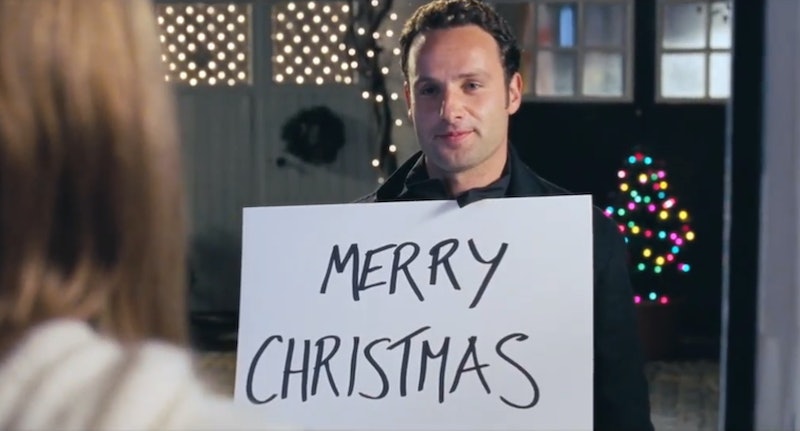 The holiday season holds a lot of constants within it. Between last minute gift shopping, scurrying back and forth to visit friends and family, and indulging in all the recipes and traditions you can get your hands on, there's hardly time to take a breath. But there's one thing you definitely should carve out time for, no matter what else is happening in your life this winter, is weeping to the most underrated Christmas album of all time: the Love, Actually soundtrack.

There’s been plenty written about Love, Actually since it debuted 15 years ago. Its many storylines offer all the talking points you need on romance, the cast is about as star-studded as it can get, and its unapologetic cheesiness is an easy target for people looking to poke fun. Though I’m now a full-fledged Love, Actually enthusiast, I wasn’t allowed to watch the bulk of the film throughout my childhood, even though my mom was a fan — the cursing and sex dotted throughout isn’t exactly fit for family movie night. But I did manage to snag the soundtrack CD she’d bought, and play it on an unending loop through the giant, bulky boombox in my room.

As a result, for a long time, I was more familiar with Love, Actually’s soundtrack than I was with the movie itself. Its soothing tunes became synonymous with Christmas, even though the vast majority of the songs don’t contain any mention of the holidays. The soundtrack, much like the film, is a cup of hot chocolate on a rainy day: comforting, inviting, and invoking the same warm fuzzies you might get when looking at a newly decorated tree or snuggling in front of a fire with your special someone. And perhaps most importantly, the songs will remind you of pieces of your own life, and everything that's gotten you from one holiday season to the next.

Given the artists it features, it’s not surprising the soundtrack pulls off such a perfect vibe. Vocalists with lush, sultry delivery do a lot of emotional heavy lifting within the film, often with just a few bars of music. Here's a full run-down:

"The Trouble With Love Is" By Kelly Clarkson

The album’s first track is "The Trouble With Love Is" by Kelly Clarkson — a song found nearly halfway through the movie, placed gently over shots of holiday lights and Christmas parties. It is a treat of a song — Clarkson’s rich voice and the jazzy tune essentially tuck you into bed even as they make you think of that one relationship you wish had ended better.

"Here With Me" By Dido

"Here With Me" by Dido is another deep cut by an astonishing female vocalist with an unmistakable voice. In the film, it slowly reveals itself just as Mark (Andrew Lincoln) accidentally reveals to Juliet (Keira Knightley) that he’s head over heels for her in that fateful wedding video scene. It's a song about longing for someone you might not be able to have, and everyone can relate to that.

"Turn Me On" By Norah Jones

Norah Jones' "Turn Me On" slinks onto the scene as Karl (Rodrigo Santoro) and Sarah (Laura Linney) share their first dance at a holiday party, finally leaning into the exciting spark of flirtation they’ve shared. It's an easy reminder of every first kiss you've ever had.

"Both Sides Now" By Joni Mitchell

This song is the score to one of the most truly devastating scenes of the film, in which Karen (Emma Thompson) realizes her husband is almost certainly cheating on her. The song calls into question whether we really know what love is, and sounds like a mournful ballad.

"All You Need Is Love" By Lynden David Hall

Lynden David Hall’s smooth, quirky rendition of The Beatles' "All You Need Is Love" sets the romantic tone for the film in one of its earliest scenes, in a delightful surprise wedding performance that celebrates love in its most basic meanings.

As this plays behind wordless, somber scenes, the legendary Otis Redding’s track of "White Christmas" will have you weepy with one of the only directly holiday related tunes featured in the movie.

Playing just as Sarah prepares to bring Karl up to her room after they leave the Christmas party, together, "Songbird" strikes the perfect lighthearted and tender tone necessary for would-be lovers' first night together.

"I'll See It Through" By Texas

This song appears for just a flash in the film, but still appears on the soundtrack list, and for good reason. It's an exploration of how far people will go for each other, and a promise that they'll stick around even when things get tough.

This is proof that some of the most affecting songs come without any lyrics — the "Glasgow Love Theme" by composer Craig Armstrong is a somber, instrumental piece that appears a few times throughout Love, Actually. Armstrong, who also scored music for films like Moulin Rouge and The Great Gatsby, told Dazed that the song “had a romantic loneliness about it which seemed to reflect the unrequited love throughout the film.”

"Take Me As I Am" By Wyclef Jean Ft. Sharissa

Dotted between these emotional heavy hitters are also the peppier tunes in the soundtrack. "Take Me As I Am" by Wyclef Jean plays during a wedding reception, an upbeat reprieve in a sea of ballads, while still staying true to the thread of quirky romance in the film.

"Wherever You Will Go" By The Calling

"Wherever You Will Go" by The Calling plays in the background of one of Love, Actually's most silly, ridiculous moments, but still manages to feel nostalgic and poignant and heartfelt, like the rest of the soundtrack.

"Jump (For My Love)" By The Pointer Sisters

There are also tracks that offer pure comic relief — "Jump (For My Love) by the Pointer Sisters lends itself to an iconic dance scene with Hugh Grant.

"God Only Knows" By The Beach Boys

"God Only Knows" by The Beach Boys wraps up the film. It’s a classic song that could have seemed corny as a bookend, but really speaks to the essence of Love Actually. It drives home the point that the people we love and surround ourselves with are the ones who make us who we are.

Things aren’t perfect for all of the movie's characters as the final credits roll, but for every moment that exposes cracks in their foundations, there are more that exude joy and hope and possibility. That’s what makes all the music in Love, Actually truly special. No song is a throwaway — every single one is rife with emotion, and excels at bringing those feelings out in viewers.

For many of us, the holiday season is about reflecting on the year that's passed, appreciating the love present in our lives, and seeing where all the ups and downs since last year have gotten us. So, as you hang decorations and drive toward your families this year, indulge in all the typical songs that put you in the holiday spirit. But don't neglect what Love, Actually has managed to do — cultivate a set of tracks that'll give you the warm fuzzies that are necessary around the holidays, while also helping you reminisce about the year that got you there.