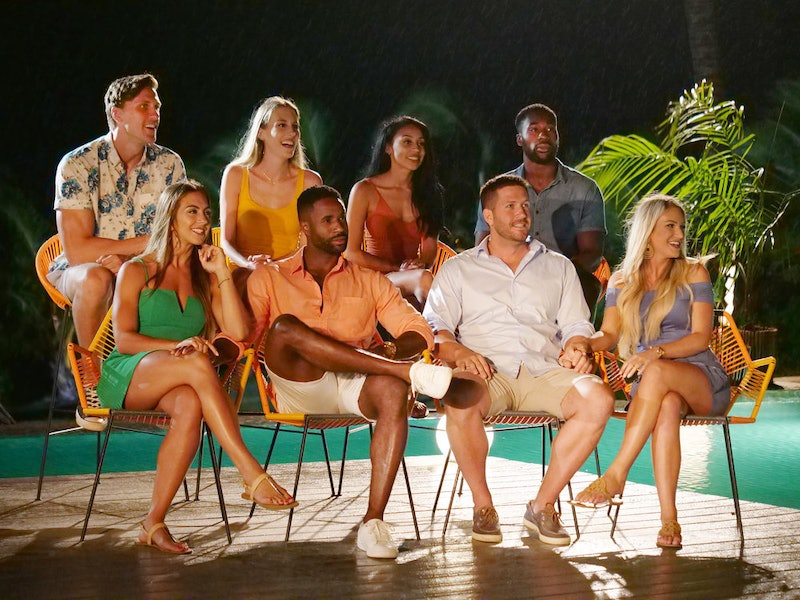 Say you're uncertain about the future of your relationship. Some people may conclude it's time to take a break from one other, others may try working things out in couples therapy. But if you're one of the couples on Temptation Island, you decide to throw caution to the wind and date other people on national television to see if you still love each other after being "tempted" by others.

Premiering Jan. 15, Temptation Island is essentially reality TV's exploration of the sunk-cost fallacy, applied to relationships. The show asks its couples "Sure, you may be at a crossroads in your relationship, but are you willing to leave something you've already put so much effort and labor into for something new?" To test the theory, the show separates four couples and sends them off to live with 12 eligible bachelors and 12 eligible bachelorettes, any of whom could entice them to leave their relationship and start fresh.

If these couples can resist falling for (or into bed with) someone else, they can go home knowing their relationship is strong enough to survive temptation. Of course, of these four couples, surely at least one will falter. Here are the pairs that audiences can expect to see fight for their relationship — or jump at the chance to leave it — on the show.

Hailing from Chicago, Karl Collins and Nicole Tutewohl have been dating, and as revealed in an interview with The Chicago Tribune, definitely have some drama ahead. "It's as real as it gets. I think it's important for viewers to know that," Collins teased.

While he didn't say if they leave still together, Tutewohl explained that when they arrived on Temptation Island, "We had just moved in together, moved to Chicago. We were in a big step in our relationship, and I think we were at the point of figuring out if this was 'the one' for each of us. Are we ready for that next step of engagement?"

By the end of the season, they'll likely be a lot closer to answering that question.

According to their USA bio, John and Kady met on Bumble and have been dating for three years when the touch down on the island. A preview clip for the series shows that Kady is fighting hard for the relationship, as she uses the show's rules to block one of the singles, who John calls "the hottest out of all of [the women]," from going on a date with her boyfriend.

Javen and Shari step onto Temptation Island with some trust issues, according to their USA bio. They've been dating since they were 16 years old, but Javen cheated on Shari while in college and so they go to Temptation Island — which could just as easily be called Cheating Beach — to prove that in an environment designed to open the door to other people, Javen will not cheat. Javen, on the other hand, is hopeful that Shari dating other men will help strengthen their bond as she's only ever dated him.

Evan and Kaci dated off and on for five years before becoming exclusive for another five years, which has taken them to Temptation Island. According to their USA bio, Kaci is ready for marriage, but something is keeping Evan from proposing, and the couple seems hopeful that Temptation Island will reveal just what that roadblock is.

More like this
Yes, That's Christina From 'The Bachelor' In Taylor Swift's "Fifteen" Music Video
By Brad Witter
All The Clues About Aly & Zach’s Relationship Status After 'The Bachelor'
By Brad Witter
Vanessa Bauer Is Reportedly Dating Her 'Dancing On Ice' Partner
By Darshita Goyal
Airris From 'MAFS' Says He Doesn’t Regret Going To Decision Day With Jasmine
By Brad Witter
Get Even More From Bustle — Sign Up For The Newsletter
From hair trends to relationship advice, our daily newsletter has everything you need to sound like a person who’s on TikTok, even if you aren’t.