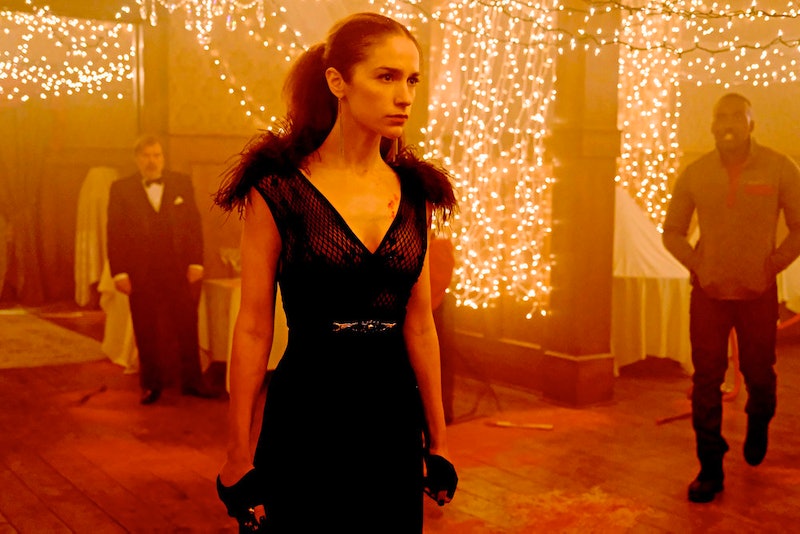 Wynonna Earp is just one episode in to its third season on Syfy, and the hype train is moving, full steam ahead. With its delicious combination of genres, plucky Scooby gang, witty pop culture references, and variety of 'ships, the show is undeniably fun to watch. But it's the women of Wynonna Earp — and the way its fandom identifies with and idolizes them — that's inspired much of the laudatory coverage of the show. Speaking over the phone before the season premiere, star Melanie Scrofano (your Wynonna) uses one scene to symbolize the show's casually revolutionary mode of storytelling, spearheaded by showrunner Emily Andras.

She speaks carefully, pausing occasionally, intent on not spoiling anything while explaining an upcoming scene in which Wynonna and another female character have to run across a snowy field. (The series shoots in Calgary, where temperatures frequently dip into the negatives during the winter months.) And because the snowfall would only remain untouched until they went for it, they had to do the scene in one shot.

"I don’t know if you’ve ever tried to run through waist-deep snow, but it’s next to impossible," the actor laughs. "And what we got was not what anybody... if we could have reshot it, we would [have]. But I think that its imperfection was so beautiful, because we didn’t shoot it again. That was real."

"Real" is perhaps not the first adjective that comes to mind when you think about Wynonna Earp's main plot, which revolves around a family curse, a formerly immortal Doc Holliday in his prime in 2018, and a gun that kills geo-locked zombies, doomed to otherwise haunt the same plot of land forever. But it's the concept that rules Scrofano's performance as the foul-mouthed, titular heir to Wyatt Earp's duties and supernatural troubles.

"The danger with genre is playing genre, instead of playing the honesty of what’s going on," she says. The actor explains that she even unplugs from Twitter when the show is shooting, so she doesn't "start losing the world that [the show has] created" and isn't tempted to "[play] the memes and gifs" rather than what's on the page.

The result of that focus is fans seeing themselves not just in Wynonna's disordered personal life or the way in which Waverly questions her place in her family, but in their most heroic and selfless moments, too. Because even when the women of Purgatory are saving the world, they're not doing it to anyone's specifications. It's extraordinary, but somehow still relatable.

"It’s not perfect and it’s not polished and it’s not glossy and it’s messy and real," Scrofano says about that emblematic, wintery action scene. "We got to the other side of the thing we were supposed to run through. And then we still kicked ass at the end of it."

That, the actor defines, is what a "strong female character" is to her — someone who "just gets on getting on, even when it’s not pretty, and even if there’s some swearing and tears along the way."

The Wynonna team has to be doing nearly everything right, including allowing its female characters to behave like fallible people, because the fandom is aggressively supportive — in the most inclusive way possible. They're quickly getting a reputation, as Den Of Geek and Vulture have lately pointed out, of being the nicest fans in the business.

So once shooting is complete and Scrofano gets herself back online, she's more than happy to take in the personal testimonies of fans of the show. "Because it does affect people’s lives," she says. "It either makes them laugh in really dark times, or it makes them think about people in their lives differently, or it makes them see themselves in a way they never saw themselves and it gives them strength. I think that inspires me to really work harder than I would if I didn’t think it was reaching anybody."

Rain, sleet, or waist-deep snow, Wynonna Earp is hell-bent on showcasing women as you actually know them.