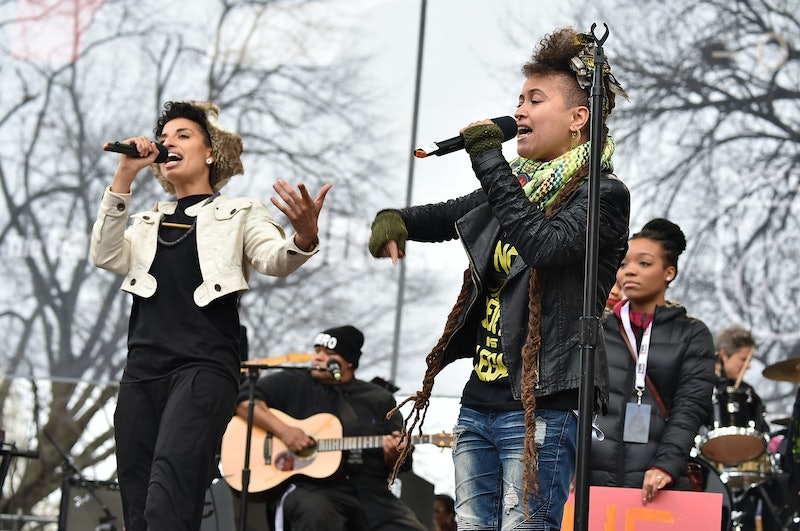 In an ad released last week, the National Rifle Association zeroed in on the Women's March, accusing the group of inciting violence. Now its organizers are responding. The Women's March will be protesting the NRA's headquarters in Fairfax, Virginia, on July 14, in part to "denounce the false and intimidating rhetoric of hatred."

This is the latest development in a standoff that began with the NRA publishing a video back on June 12 that read as propaganda to many. The ad, narrated by talk show host Dana Loesch, used "they" to refer to protesters.

"They use their schools to teach their children that their president is another Hitler," she says, going on to speak about the resistance and how the cries of racism, sexism, and more are used to "smash windows, burn cars, shut down interstates and airports, bully and terrorize the law-abiding."

This video was extremely upsetting to many on the left, including the Women's March organizers. Many tweeted in response and one, Tamika Mallory, wrote an open letter in response, calling on the NRA to take it down. She wrote:

You are responsible for an organization that claims to be the "oldest civil rights organization in America." However, recent actions by the NRA demonstrate not only a complete disregard for the lives of black and brown people in America — your fellow citizens — but appear to be a direct endorsement of violence against these citizens exercising their constitutional right to protest.

The NRA then responded with another video, this one nearly four minutes long, that specifically called out Tamika Mallory. The video is narrated by Grant Stinchfield, another conservative talk show host, who says, "You call it dangerous and demand it to be taken down? I’m here to tell you not a chance."

Then, on July 14, the Women's March will respond not with a letter, but with an action. The event is up on Facebook already, and the event information explains what their grievances with the gun group are:

We know that we are not safe. But we will not be intimidated into silence.

Recent actions of the NRA demonstrate not only a disregard for the lives of black and brown people in America, but appear to be a direct endorsement of violence against women, our families and our communities for exercising our constitutional right to protest. On July 14th, Women’s March and partners will mobilize a mass demonstration, again grounded in the principles of Kingian nonviolence, to denounce the false and intimidating rhetoric of hatred and send a clear message that our movement will proudly and bravely continue to strive for the respect of the civil and human rights of all people.

There couldn't be a clearer and better way to confront the message that the NRA spreads in their videos, and the Women's March knows this — take the powerful response to Trump's election, the Women's March on Washington, as an example when nearly half a million people marched in D.C., and if counting the sister marches around the country, it was possibly the largest protest in U.S. history.