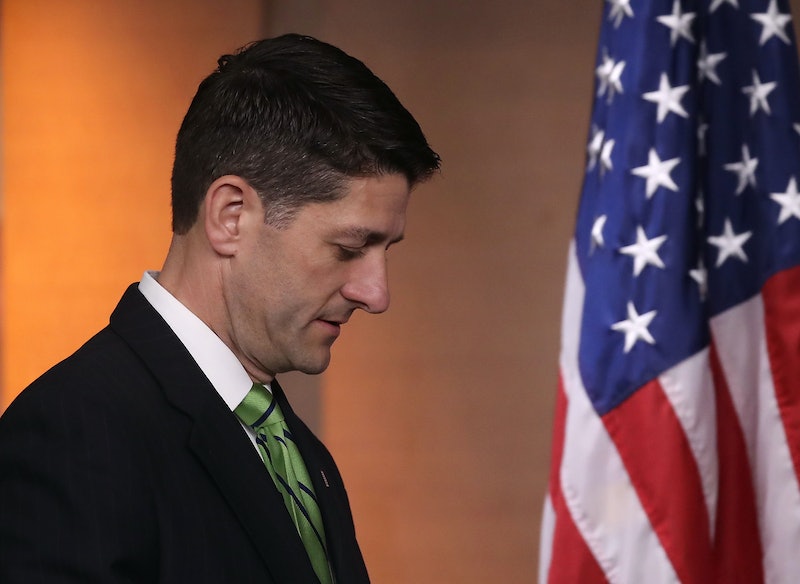 During a field trip to Washington D.C. on Thursday, a class of eighth graders from New Jersey was given the chance to pose for a photo with the Speaker of the House outside the nation's capitol. Some of the students took the opportunity, but just as many didn't: Around half of the eighth graders refused to meet Paul Ryan, according to The Village Green, and instead waited in a parking lot across the street. When asked why, several of them explained that they have political differences with the Speaker.

It's unclear precisely how many of the students snubbed Ryan, but the Village Green reported that roughly half of the eight grade class at South Orange Middle School decided not to partake in the photo-op. Those who spoke about their choice to the media afterwards made it pretty clear why: They don't like Ryan's policies, and they don't like that he supports President Trump.

“I can’t take a picture with someone who supports a budget that would destroy public education and would leave 23 million people without healthcare,” student Matthew Malespina said in an interview with the Village Green; he elaborated on this to Washington Post, calling Ryan "a man who puts his party before his country.”

Wendy Weeks, who also turned down the opportunity to meet Ryan, told the Village Green that "taking the picture represents that you agree with the same political views, and I don’t agree with his political views, so I chose not to be in it." Louisa Maynard-Parisi said that she sat it out "because [Ryan] believes in most of what Trump believes in," while Sophia Kriaker explained that she didn't want to be in a picture with Ryan because he's "shadowing Trump's ideas."

After the meeting, Ryan posted a picture on Instagram of himself giving a fist bump to one of the students who did participate in the photo-op; that post was soon flooded with comments criticizing the Speaker, some of which appeared to come from the students themselves.

"I look happy in this picture because I thought you would at least stay for a couple of minutes and I would get to show you a piece of my liberal mind," user @natekianovsky wrote. "Unsurprisingly, I was wrong. I hope you had fun meeting my liberal school who oppose everything you do!"

Ryan's office told the Post that the Speaker "always appreciates the opportunity to welcome students to the Capitol."