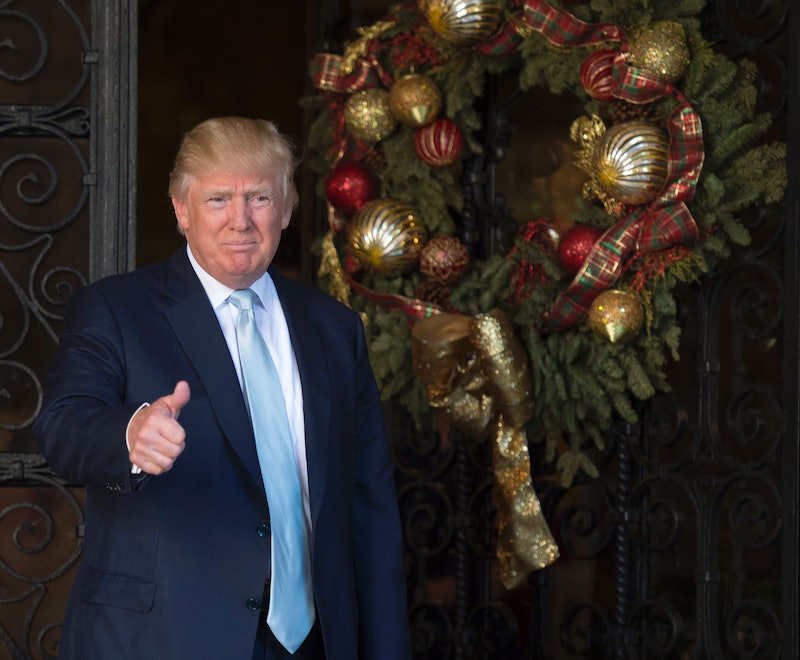 If you happen to have any travel plans to China in the near future — to the Shanxi province of north China, to be specific — then there's a possibility you might run into a, shall we say, curious artistic representation of America's 45th commander-in-chief. And for all the reasons it's strange, and maybe not the most flattering representation, the man himself would probably prefer it to some of the American street art statues that were produced this year: This Donald Trump rooster statue is catching everyone's eye.

Make no mistake, it's a more respectful tribute than the naked Trump statues that popped up across America during the 2016 presidential campaign, although neither one of the statues bothered to clothe the incoming commander-in-chief. But the Chinese statue doesn't have to, because Trump isn't portrayed as a 70-year-old adult man, but a cartoonish rooster mascot, complete with an iconic flip of gold hair (albeit a thicker mane than he actually has right now).

The hair might not even be the funniest aspect of the statue. While it's easily overlooked, the real crowning achievement might be the rooster's hands, which display two of Trump's most habitual (and in an entirely subjective opinion, silly and unpleasant-looking) hand gestures, with the right flashing a sideways-pointed index finger, and the left doing that index-to-thumb thing he does. It's tough to describe, but you know it when you see it.

Quite the spitting image, wouldn't you say? Now, obviously, if you were judging strictly by geopolitical relations, it'd be a little surprising to see a Trump-themed statue pop up in China, given the already rocky start to their relationship. But consumerism and marketing are quite a separate thing from international affairs, and if someone out there thinks a Trumpish rooster statue will help lure more shoppers to the mall, so be it.

The only big question is whether this hot new icon will make his way to any other shopping malls throughout China, or perhaps get exported internationally. According to CNN, at least four shops are already selling miniature replicas, as well as massive ones that reportedly stand more than 30 feet tall, a truly haunting thought.

Which means you could someday see one of these things sitting on somebody's shelf anywhere in the world, providing they have the money and wherewithall to have done a little traveling. Although, let's be honest, as cute as the statue is, that might start to feel just a little bit dystopian — living in Trump's America, with weird little Trump rooster statues sprouting up across the world? It might sound funny at first, but be careful what you wish for.