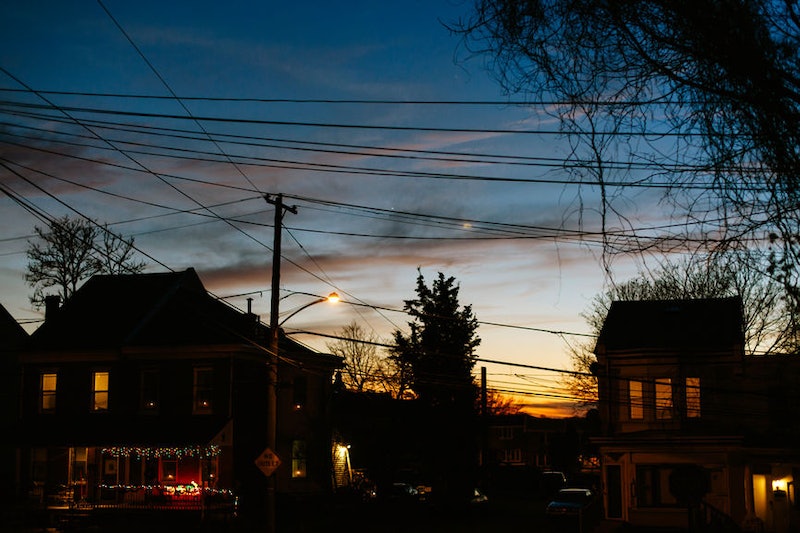 "The street is quiet in a way I didn’t like," says the protagonist of Mary Kubica's forthcoming thriller, The Other Mrs., about a family who moves from Chicago to small-town Maine and quickly becomes embroiled in a murder mystery. "An eerie quiet, an unsettling quiet, and at once I’m reminded of the notion that there’s safety in numbers. That bad things are less likely to happen among crowds. There’s a misconception that rural living is better, safer than urban living, and yet it’s simply not true."

There is comfort in the mass and anonymity of a large city. The opposite, then, could be true of the suburbs, where theoretically, everyone — family, neighbors, local shopkeepers, and mailmen — knows you. Sometimes, they even know who you spend time with, when you leave and arrive home each day, where you shop, what you eat, and how much money sits in your bank account. And they might have cause to dislike you, for whatever reason, no matter how benign.

Between 2005 and 2010, 60% of all violent injuries in the U.S. were inflicted by someone the victim knew, and 60% of the time those victimizations happened in the home. The idea of being disliked by your neighbors is, to put it mildly, scary. As Erika Eichelberger wrote in a 2013 Mother Jones story: “You’re more likely to be killed by someone you know than by a stranger, and you’ll probably be at home when it happens.”

Thrillers set in suburbia thrive on the sense that something is just not quite right in the places you hope will be safe. That general uneasiness lends itself well to fiction, and explains why domestic suspense is so popular — and always has been.

"In a big city, you’re part of this vast school of people living and moving together in this sea of cars and concrete, and it’s impossible to focus on a single fish for too long," author Allison Dickson tells Bustle. "But when you live in a small town with far fewer fish and much more space between them, you can’t help but notice if one isn’t swimming right."

"Living on a 'nice street' is supposed to protect you from 'bad’ feelings," says Lisa Jewell.

Take, for example, Dickson’s novel The Other Mrs. Miller, which centers on two women who both watch each other, though only one knows why. Or Alex North’s terrifying new novel The Whisper Man, which follows a serial killer preying on a small town for a second time. Shari Lapena’s latest book, Someone We Know, explores what happens when a teenager sneaks into his neighbors’ houses and learns their secrets. A suburban book club is upended by a mysterious outsider in Joshilyn Jackson’s Never Have I Ever. After nightmare neighbors move onto the idyllic Lowland Way in Louise Candlish’s Those People, someone winds up dead. A grieving mother is taunted with information about her teenage daughter’s death in Kaira Rouda’s The Favorite Daughter, set in an affluent Southern California community. The neighborhood in Lisa Jewell’s Watching You is described as "the sort of place where everyone has a secret and everyone is watching you."

Humans have a primal and biological need to feel safe and secure in their homes and "living on a 'nice street' is supposed to protect you from 'bad’ feelings," says Lisa Jewell. "A backdrop of pretty houses and homogeny lends an extra dimension of irony."

That same primal and biological need often pushes people into a state of "keeping up with the Joneses." As a means of self-preservation, some develop rigid and separate inner and outer selves. After all, no one wants to be the one in the fishbowl not swimming right.

"I think what we have is a more pressured, complicated society where everyone feels competitive to some degree and where people feel compelled to appear successful and happy, even if they’re not," says Shari Lapena. "And of course, we want to see the mask slip, perhaps because we are faking it ourselves."

"You have the kingpins and queen bees, the allies and enablers, the challengers and loudmouths,” says Louise Candlish. "We’re all familiar with those social structures..."

Perhaps people are becoming more voyeuristic, she adds, because of the abundance of reality television shows and a societal addiction to social media. Or maybe they’re becoming fascinated with their next door neighbors and what’s going on closer to home because politics and the news about people in high places is so distressing right now.

That’s why the plots of domestic suspense novels — in which the drama often centers on basic human instinct — serve as a form of escapism. They let the reader’s imagination run wild and force them to take a closer look at their shared common experiences and tropes.

"You have the kingpins and queen bees, the allies and enablers, the challengers and loudmouths,” says Louise Candlish. "We’re all familiar with those social structures and have learned how to live with them. We can even cope with rulebreakers, but what we find difficult is people who refuse to acknowledge that rules exist."

To put it bluntly, it’s easier to understand, and even rationalize, why your strange neighbor was hauled off in handcuffs — maybe you even called in the tip yourself — but it’s harder to rectify why a mother and father were killed shielding their three-month-old son from gunfire inside an El Paso, Texas Walmart.

Rather than confront the danger out in the real-world that obviously exists, readers are instead escaping with domestic suspense thrillers that help them understand the dangers that lurk behind their own front doors, where things are more personal — and maybe easier to understand. By hitting them where they live, play and often even work, authors explore their most basic human fears: That they aren’t safe in their own homes or that they can’t trust their family and friends – on the page and the reader, in turn, feels a little bit safer knowing they’re "in" on the suburban secret.