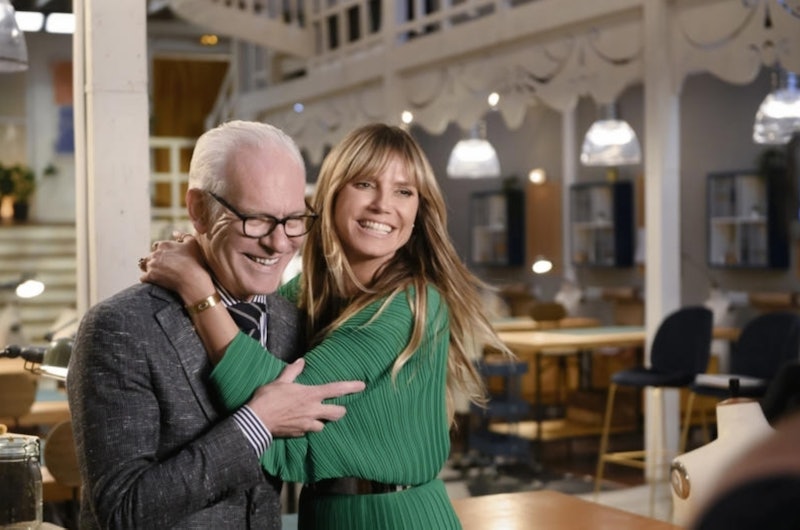 Amazon's Making the Cut may share a lot of DNA with Project Runway, but there's one thing Tim Gunn didn't carry over to the new design competition show: his iconic "Make it work!" catchphrase. "We don't have a lot of 'make it work' moments on Making the Cut," he tells Bustle. "I mean [the designers are all] under stress and pressure, but they also are very evenly keeled in a way. They're centered. And for the most part, they know who they are and what they need to do."

Gunn co-created Making the Cut alongside Heidi Klum after working with her for 16 seasons on Project Runway. The show similarly follows a group of designers as they compete for a career-changing prize — except instead of $250,000, it's $1 million. It also features contestants already established within the fashion industry, instead of the often self-taught, just-starting-out designers typically cast on Project Runway, which Gunn admits made his job a lot easier. "I felt physically lighter on Making the Cut than I did on Project Runway because I knew how capable the designers were of doing their own heavy lifting," he says. Not to mention they had access to professional seamstresses who assembled most of their garments.

"Also they were helping each other," Gunn adds. "You never know how they're going to interact when they arrive, but they really bonded. They formed a community, and they were supporting each other and it was a really moving thing to witness."

This freed up Gunn to focus less on small details, like the garments' construction, and more on how each designer's clothing fit into their larger vision for their brand. "It was much more rewarding for me personally, in terms of what I actually [got to know] about them," Gunn says.

But don't worry, "make it work" isn't retired for good. "I've been saying 'make it work' since I began teaching," Gunn says. "So that's also just part of who I am."

More like this
Everything To Know About 'The Real Housewives Ultimate Girls Trip' Season 4
By Jake Viswanath
Andy Cohen Apologized To Larsa Pippen After A 'RHOM' Season 5 Reunion Dust-Up
By Brad Witter
Everything To Know About The 'Daisy Jones & The Six' TV Series
By Maxine Harrison and Brad Witter
'Bling Empire: New York' Star Nam Laks Is The “Blair Waldorf Of Thailand”
By Alyssa Lapid
Get Even More From Bustle — Sign Up For The Newsletter
From hair trends to relationship advice, our daily newsletter has everything you need to sound like a person who’s on TikTok, even if you aren’t.