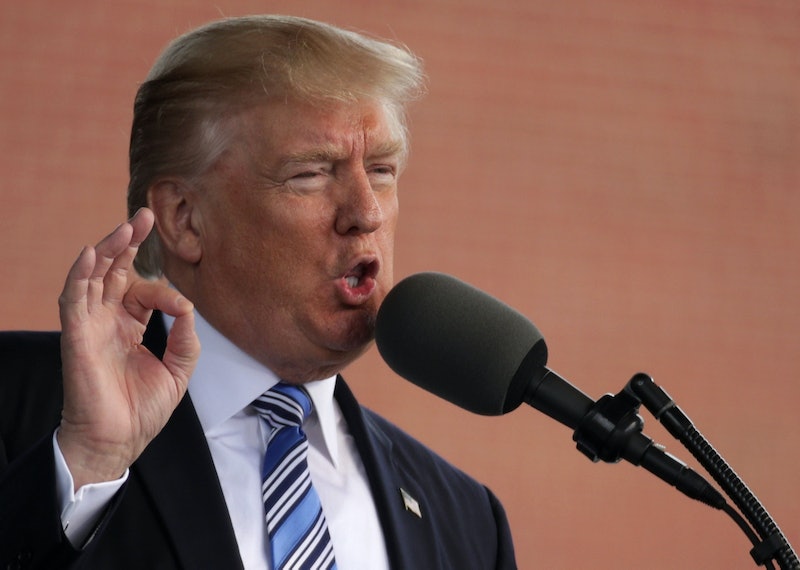 Twitter's hashtag for #MothersDay is worth checking out. Millions of users are wishing their mothers and mother-like figures a wonderful Mother's Day, and among those users is the one and only Donald Trump. Trump tweeted, "Wishing @FLOTUS Melania and all of the great mothers out there a wonderful day ahead with family and friends! Happy #MothersDay!" The tweet got over 12,000 retweets and 64,000 likes but the best part is perhaps how the Internet responded to Trump's Mother's Day tweet.

Trump tweeted his Mother's Day greeting from his Virginia golf club, which, according to NBC's senior news editor Bradd Jaffy, is "his 21st golf course visit and 34th visit to a Trump private business property since taking office 16 weeks ago."

Most importantly, there were reminders of Trump's very own statements about women. For what it's worth, this is not the first time a tweet from Trump on women-related issues was met with friendly verbatim reminders about his words on the opposite sex. For instance, Trump tweeted about women reaching their potential and the Internet reacted similarly. For good reason.

Twitter users reminded Trump of his statements from 2005 about women, including the claim, "I did try and fuck her. She was married." The revelation, which shocked many, came from The Washington Post, and although Trump had issued a brief clip of himself apologizing for the statement, he said the Post's story was a "distraction from the issues we are facing today."

Highlighting sexual harassment is not a "distraction" but a grim reality for one out of three women at their workspaces, according to a Cosmopolitan survey.

Most relevant to Trump's tweet about those "great mothers" might be his own statement about pregnant women. In 2004, Trump told NBC's Dateline that pregnancy is "certainly an inconvenience for a business." When Hillary Clinton brought this statement up during the presidential debate in 2016, Trump completely denied having issued such a statement.

Maybe someone reminded him that his statement inadvertently prioritized corporate profit over women's well-being. Perhaps someone told him that pregnant women in the United States already face dire conditions and his statement reflected on that truth rather poorly — after all, America is the only developed nation with a disturbingly high rate of maternal deaths.

Mother's Day is a good time to reflect on how individuals and societies treat these women who, frankly, run the world and are rarely thanked for it. It's also a great day to remind Trump of his own words about women who could've been someone's mother, including the one he claimed to have "moved on like a bitch." As long as there is WiFi and Twitter, Trump can rest assured that he will receive these timely reminders, because the Internet never forgets.